You can’t go wrong with either, but one has the edge.

Sedans are dying, but hatchbacks are also going the way of the dodo. Ford killed the Focus and Fiesta, Chevrolet dropped the Cruze, Honda will likely get rid of the Fit after this year, and Volkswagen has no plans to bring the new base Golf stateside. So as more manufacturers shift to subcompact crossovers in their place, there are only a few good five-doors left in the US. And the 2020 Mazda3 and Toyota Corolla Hatchback are two of the best.

We've driven and reviewed these two individually (the Mazda3 is actually our current long-term vehicle), and both of them score well on our rating system. But this is the first time we've pitted the two against each other, and what's obvious right away is that there's no clear winner. Both of these vehicles are very good.

The Mazda3 stands out in a few ways – it looks good, has a luxurious cabin, and drives very well. But the Corolla does more of what you want a good hatchback to do; it delivers efficiency and comfort at a more affordable price. Only when you get into the nitty-gritty details does a winner emerge.

Mazda: The Mazda3 looks great – not just great for the class, or just for a hatchback, but genuinely great. The brand's “Kodo” design language translates well to the fashionable five-door, with sharp LED headlights and a large hexagonal grille up front paired to equally sleek taillights in the rear. The oversized C-pillar is the only point of contention – and it is thicc – but the lone element is easy to overlook amongst the other attractive cues, especially given our tester's spec.

The no-cost Polymetal Grey metallic paint job and 10-spoke gunmetal gray wheels create the Mazda3's best look. And adding the $1,950 Appearance package blacks out the front air dam, mirrors, side sills, bumper skirt, and spoiler in an effort to give the handsome hatch a more aggressive look. All in all, the Mazda3 is an eye-catcher.

Toyota: While the massive honeycomb grille (a Toyota staple) isn't universally loved, the Corolla hatch is still a good-looking vehicle. The hook-shaped headlights and taillights provide a nice contrast to the Mazda's simple, sleek cues, and the silver paint job with an accenting black roof helps the Corolla stand out, too. In the sportiest XSE spec, it looks even better.

Our Corolla Hatchback XSE's 10-spoke directional wheels and roof-mounted spoiler make this hatch much angrier-looking than the Mazda – in a good way. The Corolla's sporty cues add a subtle touch of aggression to the five-door's overall look and blend seamlessly into the rest of the vehicle's shape. But the Toyota's boy-racer cues are still no match to the Mazda3's mature lines.

Mazda: Cover the Mazda badge on the steering wheel and you might convince us that the 3's interior belongs to a luxury car. It's that good. The flat, horizontal dash wears a beautiful mix of red leather and soft black plastic. There's a touch of piano black plastic on the center console, but it's inoffensive. All those elements look out of place (in a good way) in a hatchback. The driver and passenger seat wear the same high-quality red leather as the dash, and they're some of the best front buckets you'll find anywhere in terms of quality and feel.

But passenger space in the front seats and the rear bench isn't great. Front legroom in the Mazda3 barely grows from 42.2 inches in 2018 to just 42.3 inches in this model, and the rear seat actually loses headroom from 2018 – 37.6 inches compared to 35.8 inches. And both compartments feel very cramped for your 6-foot-tall author; average-sized adults won't be comfortable in the back seat especially.

Cargo room suffers the same fate. The Mazda3's 20.1 cubic feet of trunk space is down versus the previous model (20.2 inches), its liftover height feels high for a hatchback, and the entryway is extremely narrow. While it may be fine for groceries, anything larger than a gym bag barely fits in the trunk. 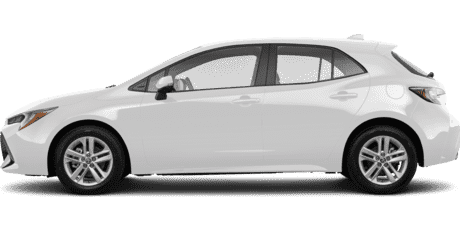 save over $3,400 on average off MSRP* on a new Toyota Corolla Hatchback

Toyota: The Corolla Hatchback isn't as nice as the Mazda inside. The XSE gets two-tone, leather-trimmed seats and stitched leather on the steering wheel and shifter… but that's about it. The Toyota's dash and door panels wear a combo of spongy, rubberized pleather and hard plastic – which is fine until you step inside the Mazda. And the Corolla's center console gets the same mix of low-cost materials.

But we still prefer sitting in the Toyota. Because the Corolla Hatchback is one inch taller than the Mazda, it's also much airier, which means the rear headroom and legroom don’t feel nearly as tight. And even though those volume figures are similar, the Mazda is actually three inches longer than the Toyota, which means the Corolla makes better use of its allotted space. Passengers will be more comfortable in the Corolla than they will the Mazda, but only just.

And the Corolla’s spacious interior makes it hard to pick between the two – it really comes down to preference. Do you want the Mazda's cramped but upscale cabin, or would you prefer the Corolla Hatchback's airy yet cheap interior? If we have to pick, though, the Mazda3 gets the nod.

Mazda: Powering the Mazda is a 2.5-liter four-cylinder engine good for 186 horsepower and 186 pound-feet of torque, our tester utilizing a quick-shifting six-speed automatic versus the base six-speed manual. And that setup sends power to all four wheels rather than just the front ones, the automatic being the lone option with all-wheel drive. Only the Mazda3 and Subaru Impreza have all-wheel drive in the class, and though it's a $1,400 option, it gives the 3 an advantage over the front-drive-only Corolla.

And the Mazda3 is great to drive. The hatchback's four-cylinder has lots of low-end torque, which gives it plenty of power off the line, and the combo of well-weighted steering (if not a bit heavy in Sport mode) and a responsive suspension helps the Mazda3 corner exceptionally well for the class. This car is so much fun to fling around.

But the suspension is harsh and makes even smaller divots feel like potholes. And although the four-cylinder engine is torquey down low, it loses power pretty quickly and feels lethargic on the top end. Highway speeds are a bit of a chore for the Mazda.

Toyota: The Corolla Hatchback gets a naturally aspirated 2.0-liter engine that's good for 168 horsepower and 151 pound-feet of torque. Unlike the Mazda's crisp automatic, though, the Toyota sports a continuously variable transmission that's laggy and whiny, comparatively.

The Corolla hatch is still nice to drive, though. The four-cylinder engine doesn't have a ton of torque off the line but carries power well through the middle and upper limit of the rev range. The steering is light – probably a touch too light – but quick. The suspension is firm and keeps the Corolla pretty flat in the corners, but like the Mazda, the Corolla does have a rough ride. And the Mazda3 is still the sportier and more satisfying to drive of the two.

Mazda: The Mazda3 was the first to get the brand's new 8.8-inch infotainment system, which now lives in newer vehicles like the CX-30 – and it's a great display. The home screen is clean and easy to navigate thanks to the new rotary dial, which has four quick-access buttons (navigation, music, home, and back) surrounding it and a volume knob adjacent, even though changing stations is a multi-step process. The lack of touch functionality could be a complaint for some, but we don't miss it. And both Apple CarPlay and Android Auto come standard.

The Mazda3 also gets a clean 7.0-inch digital instrument cluster that displays things like navigation and music, but it isn't as intuitive or configurable as some others. The head-up display (standard on our Premium tester) picks up most of the slack, projecting things like speed and safety system displays as well as music and nav. And the Bose 12-speaker audio system is pretty bangin'. The only flaw – and it’s a minor one – is that you have to pay extra for navigation ($450) on the top-trim model.

Toyota: The Corolla Hatchback comes standard with an 8.0-inch touchscreen that has both Apple CarPlay and Android Auto standard. But Toyota's native Entune infotainment system isn't our favorite – the home screen is cluttered, the graphics look dated, and touch responsiveness is just ok comparatively.

And much like in the Mazda, additional niceties like adaptive front lighting ($450), navigation, and wireless charging are optional. The latter two come paired together as part of the $1,600 Preferred package, which also includes a JBL eight-speaker audio system. But the Mazda is the clear winner here – it has the larger screen, better usability, and just looks nicer overall.

Mazda: Last year's model only offered the i-Activsense safety suite as an option. But every 2020 Mazda3 now comes standard with active safety features like adaptive cruise control with stop-and-go, automatic emergency braking, automatic high-beam assist, lane-departure warning, and lane-keep assist. And in terms of what's available in the class, Mazda's active safety suite is one of the most advanced.

Mazda's adaptive cruise control with lane-keep assist makes traffic tolerable. The car stays centered in the lane – there's no ping-ponging – and adaptive cruise control brakes smoothly all the way down to zero. Our only real safety complaint is the backup camera, which only takes up about half of the 8.8-inch screen, for some reason.

Still, Toyota Safety Sense is great. The adaptive cruise control and lane-keep assist work well on the highway, holding the car centered and at a safe distance to the vehicle in front of it. The system can even navigate the Corolla around trickier turns with negligible input from the driver. But while Toyota's safety system is probably equal to Mazda's setup functionally speaking, the Corolla XSE's lack of full stop-and-go cruise control is damning.

Mazda: The Mazda3 is one of the least efficient cars in the class – our all-wheel-drive tester especially. The five-door gets just 24 miles per gallon city, 32 highway, and 27 combined. The front-drive model gets a slightly better 30 mpg combined, but these numbers are still below the competition. For example, the lone all-wheel-drive alternative, the Subaru Impreza, returns up to 31 mpg combined.

Toyota: The Corolla Hatchback has much better fuel economy than the Mazda. In the right spec, it’s actually the most fuel-efficient car in the class. Our front-drive XSE tester gets 30 miles per gallon city, 38 highway, and 33 combined. The base Corolla Hatchback SE, meanwhile, gets up to 36 mpg combined.

Toyota: The Corolla Hatchback is handily the more affordable of the two, but that’s always been Toyota’s MO. The base Corolla hatch costs $20,290 to start, while the XSE model asks a still reasonable $23,240. After options like the $1,600 preferred package, the $500 black roof spoiler and side mirror treatment, and $415 adaptive headlights, our Corolla costs just $27,810.

If you're in the market for a hatchback, these are two of the best (not to mention two of the only). While some companies are focused on subcompact crossovers almost exclusively, it's refreshing to see that Mazda and Toyota still care about the tried and true five-door.

But while the Corolla Hatchback is comfortable, efficient, and generally well priced – and it looks pretty cool in the XSE trim – the Mazda3 is the better vehicle of the two. The Mazda looks nicer, has a more upscale cabin (even if it is severely cramped), and even offers more safety equipment and better technology out of the box. You will have to pay a bit more – but if you want the best hatchback on sale today, the Mazda3 is it.