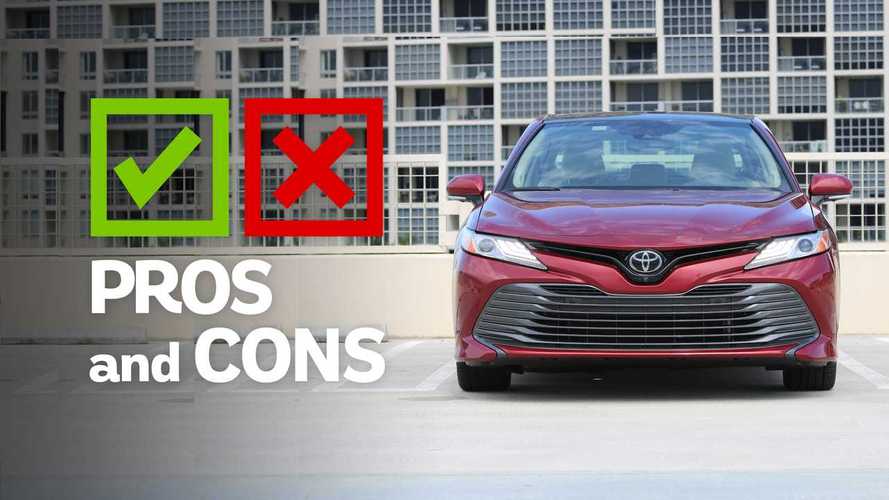 Despite its Japanese badge, the Camry mid-size sedan is as American as apple pie and baseball. Not only are the majority of Camrys sold in North America built at Toyota’s Georgetown, Kentucky plant, the family sedan also holds the title as the best-selling car (i.e. a vehicle that’s neither a truck or crossover SUV) in the United States.

2018 Toyota Camry XSE Review: Getting Better All The Time

Following a redesign last year, the 2019 Toyota Camry soldiers on largely unchanged. That’s no bad thing, as the latest Camry sports a dynamic aptitude like no other before it. No, the Camry won’t fool you into thinking it’s a sport sedan, but its sturdy platform, confident controls, composed ride quality, and competent powertrains mean the model is no longer synonymous with behind-the-wheel boredom.

While a 301-horsepower 3.5-liter V6 is available in the top-of-the-line XLE and XSE models, most Camry models sport a 2.5-liter four-cylinder engine that makes 203 hp in the L, LE, SE, and XLE trims, the latter of which we tested. Opt for the sportier, high-end Camry XSE and the four-cylinder produces 206 horses.

Both Camry engines mate to an eight-speed automatic transmission that sends power to the car’s front wheels. Although the extra oomph of the V6 is enticing, the four-cylinder’s reasonable grunt and lower cost of entry arguably make it the more practical choice. This is a Camry after all, and practicality still reigns supreme.

Power is relative. While the 203 horses produced by the 2.5-liter inline-four of the Camry XLE may seem miniscule next to the available V6 engine’s 301 ponies, the Camry’s four-pot is still a relative powerhouse. Remember, the 2002 Camry V6 packed just 192 horsepower. Even more impressive, though, is the fuel efficiency of the four-cylinder Camry. Rated at 28 miles per gallon in the city, 39 mpg on the highway, and 32 mpg combined by the Environmental Protection Agency (EPA), the Camry XLE is among the most powerful and fuel efficient gas-sipping mid-size sedans available. Sure, the Accord and its turbocharged 1.5-liter inline-four manages EPA-rated figures of 30 mpg city, 38 mpg highway, and 33 mpg combined, but it’s also down 11 ponies to the Toyota.

Whether it’s a $24,095 L or a $29,175 XLE, every Toyota Camry comes equipped with the Toyota Safety Sense P suite of advanced safety features. This includes forward-collision warning with pedestrian protection, automatic front braking, adaptive cruise control, lane-departure warning, lane-keeping assist, and automatic high-beam headlights. A blind-spot monitor with rear-cross-traffic alert is available across the line, save for the base L trim. Our XLE tester included the $2,175 Driver Assist package, which added a 10.0-inch head-up display, surround-view camera, parking sensors, and automatic rear braking to the mix.

Kudos to Toyota for finally adding Apple CarPlay compatibility to the 2019 Camry, as Apple’s operating system is superior to Toyota’s native setup. (Alas, the Camry still isn’t compatible with Android Auto.) Sure, the Camry’s infotainment system is far from the worst in the segment, but it’s also nowhere near the best (we’re partial to the Nissan Altima and Subaru Legacy, in this case), and the Camry XLE’s 8.0-inch touchscreen suffers from middling and monotone graphics.

Despite an attractive interior design, the Camry’s insides suffer from a number of low-rent materials. Much of the lower dashboard features hard plastic with middling graining, while the faux wood trim of the XLE looks as fraudulent as a $15 bill. Fortunately, most of the car’s major touch points rely on higher grade materials. Still, the Camry’s cabin quality feels a few steps behind class leaders such as the Honda Accord and Mazda6.

Despite the Camry XLE’s reasonable starting price of $29,175 (a $5,080 increase over the entry-level Camry L’s base price), the model’s price quickly inflates with options. Along with the aforementioned $2,175 Driver Assist package, our tester also included a $1,760 in-dash navigation system, a $1,045 panoramic sunroof, and $395 worth of Ruby Flare Pearl paint. Add in $399 for floor mats and $945 in destination and this four-cylinder Camry’s as-tested price rings in at $35,644. That’s a hefty sum given the top-line 250-hp Mazda6 Signature and 252-hp Honda Accord Touring sell for $36,020 and $36,880, respectively. Avoid the options sheet, though, and the four-cylinder Camry XLE runs $945 less than a similarly equipped Accord EX-L.