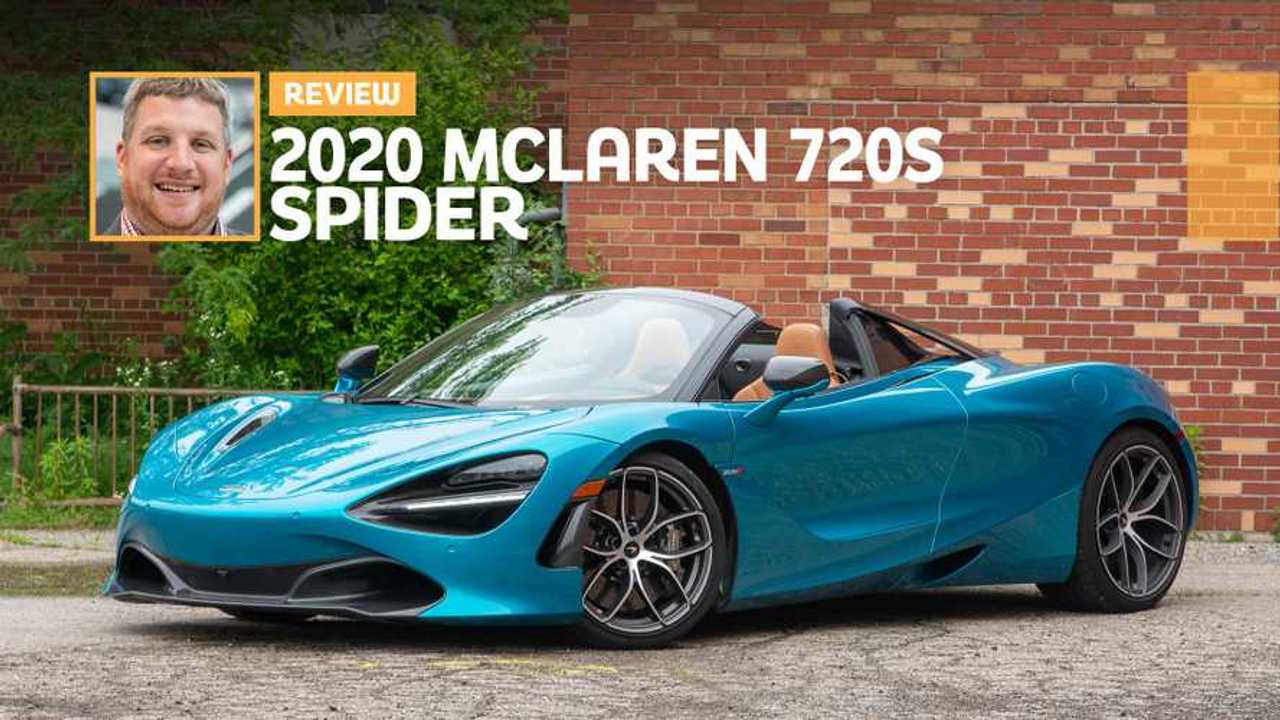 Track it, daily it, road trip it, park it. This supercar excels no matter what.

When the McLaren 720S Spider arrived at my house on a sunny summer morning, my immediate concern was how to get the damned thing in my driveway without damaging it.

See, the easement to my driveway is very steep. I’ve triggered the rear emergency brake system while backing up in a Ram 1500 (multiple times) and routinely lift a wheel when pulling crossovers in nose-first. I have to pull every car in at a very obtuse angle, be it nose-first or while reversing, lest I scrape a bit of the body. And with so little clearance, the $411,000 McLaren was my toughest test since I bought the place. I needn’t have been concerned, though. With the McLaren’s trick front-axle lift system providing a few extra inches of clearance, I eventually got the car in and out of the driveway with ease.

This was my only real concern during my long weekend with the 720S. As good as this car was in less-than-ideal conditions during our first drive in Arizona, it’s even better in the real world, potholes and all.

You’ll want to use the McLaren in the real world because of the effect it has on people. You feel like a celebrity behind the wheel (for better or worse). I hadn’t driven the droptop McLaren more than 100 feet when a neighbor stopped me and asked to get a picture of it. After coming home, I parked the Belize Blue Spider in my driveway until the end of the workday. When I wandered back outside to put more miles on it, another neighbor who’d been outside with her young daughter told me every other car that drove by stopped and took a picture. I made two shopping trips during my weekend with the 720S and found people taking pictures both times on my way out. And I get it.

The McLaren is stunning from every angle. Look at a scoop or a vent or a duct, and it leads to something even more interesting. People get lost just walking around the 720S Spider. Those same people also (usually) are unaware the McLaren is a convertible when the roof is up. You want to blow their mind, drop the folding hardtop. It doesn’t take long, and since you can do the deed up to 30 miles per hour, suddenly raising or lowering the roof at a traffic light or in traffic is a viable option.

The McLaren is stunning from every angle.

Open one of the dihedral doors, though, and like moths to a flame, the observers walk around to get a better look at the cabin.

Somehow, the 720S’ interior is a paragon of clean, intuitive design and is still monumentally frustrating. A thin, portrait-oriented touchscreen display, a smattering of buttons and knobs, and a nifty dual-mode instrument cluster serve as the primary driver interfaces, but learning how to manipulate the different arrangements takes time. The drive mode settings, for example, only work if you hit the Active button first and the learning curve for the occasionally laggy infotainment system is frustrating. Switching the instrument cluster to its Track setting without actually putting the car in Track mode requires digging around the cabin to find the right button, while the activator for the all-important nose-lift system is hidden on the end of a stalk obscured by a steering wheel spoke.

But overcome the learning curve and the 720S becomes, well, a car. With its powertrain and suspension set to their most docile drive modes, the McLaren does a fine impression of a grand tourer. During my weekend with it, I sprinted from three separate cars and coffees: a monthly gathering in Ann Arbor, an event hosted by our friends from Autoweek in downtown Detroit’s Corktown neighborhood, and a weekly affair in the suburb of Royal Oak. I didn’t even need to consider if I’d be comfortable on the 109-mile drive – the McLaren tackled the drive with ease.

And when I say comfortable, I mean “comfortable, full stop.” Aside from high-speed stability and comfort for highway travel, the 720S was perfectly happy around town, where its trick Proactive Chassis Control II absorbs and ignores Detroit’s pockmarked roads with ease. If ride quality in a more mainstream sports car like the Chevrolet Corvette is equivalent to a Jeep Wrangler, then the McLaren 720S would be like a Mercedes-Benz S-Class. It’s that remarkably comfortable.

Perhaps I’ve become jaded, but it took toting my friends and family around in the 720S to realize that, though. Each of them – both the ones I filmed and those I didn’t – remarked within the first quarter mile how composed and comfortable the 720S felt. Hit a pothole, and rather than sending the McLaren into fits, the car simply absorbs the bump and carries on. It’s unflappable, at least until you wake the beast by pressing the Active button and turn the dial for the suspension and powertrain to Sport or Track.

To be frank, the suspension becomes so firm in these two modes that I typically left it in Comfort until a good section of smooth road cropped up. In these few delightful moments, the 720S becomes track-car firm, allowing its driver to fully exploit its ability to rapidly change directions. The McLaren is darty and aggressive, with perfectly weighted, ultra-communicative steering leading the way.

Even in those sportier modes, though, the steering is easy in day-to-day use. In parking lots, it’s light and the turning circle manageable. Visibility, with either the roof up or down, is excellent, too. If you grew up hearing horror stories about how miserable supercars are at low speeds or if you’ve seen video of Lamborghini Countach owners hanging out the door of their car to reverse, the 720S is like a breath of fresh air. This is an easy car to manage tight, delicate driving situations, despite spanning six feet, four inches (or one horizontal Tom Brady) in width.

The powertrain shines in the more aggressive driving modes. Press the button for Manual mode at the center of the powertrain dial and take hold of the perfect carbon-fiber paddle shifters. The rocker-style setup means that as you pull one paddle, the other moves forward, giving a delightful mechanical-ness to manually changing gears. And boy, does the 720S change gears. The seven-speed dual-clutch transmission is rapid, almost brutal in its performance in Track mode. Combined with the paddles, changing gear becomes addicting.

The power delivery, though, is where the 720S excels. Just take a look at the faces of my friends and family as they experience the McLaren under full throttle. This car is effortlessly, incredibly quick. But accessing that speed requires a degree of faith in the car. From a standstill, the 720S likes to squirm, especially at higher engine speeds in first gear, right past the 5,500-rpm peak for the 568 lb-ft of torque but before the 7,500-rpm peak for the 710 horsepower. Keep the throttle buried and the weight on the rear axle, and the Mac straightens itself out, even if the experience is counterintuitive.

The seven-speed dual-clutch transmission is rapid, almost brutal in its performance in Track mode.

At higher speeds, the 720S shines even more brightly. I’ve never experienced a car that has the power to transfer weight rearward so quickly while at highway speeds. You can feel the weight shift as the revs climb and the torque comes into play in a lot of cars, but the sensation in the 720S is like seeing a movie in 4K for the first time. It’s a visceral accelerative experience that few cars can match, and that fewer still make so easy to exploit.

This car is easy to drive and live with. It’s comfortable and quiet when needed but can still happily set your hair on fire on the right piece of road. During a long weekend, I treated the 720S like I would any other car, and nothing phased it. At the same time, I rocketed around, winding out the 710-horsepower, twin-turbocharged V8 at every opportunity. We expect cars to handle any situation, but it’s the rare supercar that can face anything so easily and willingly.