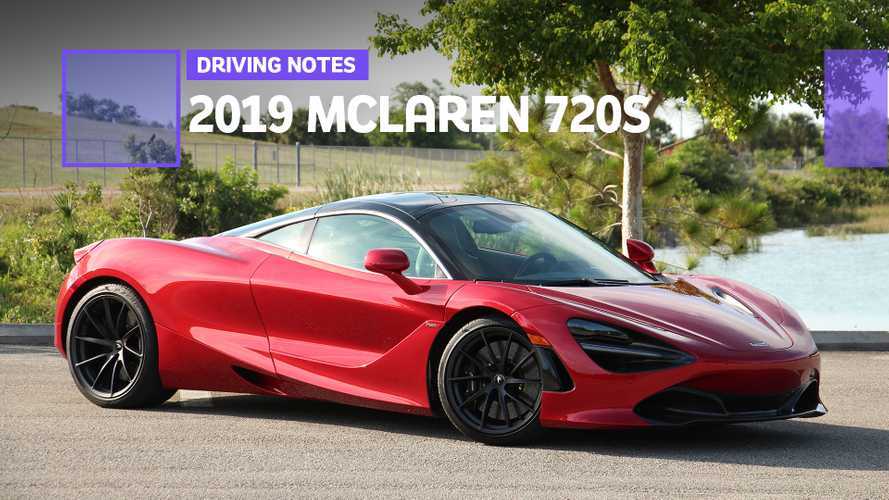 Since its debut, our praise for the McLaren 720S has essentially been universal. But in most cases, we only experienced the 710-horsepower, mid-engined rocket on unfamiliar roads or race tracks. Getting any car, be it a humble sub-compact or a hypercar, on more familiar roads and for more than the few hours provided by a press drive grants a better, deeper understanding. It’s why we often wait to render a final judgment on a car’s ride and handling or real-world fuel economy until we have a better handle on the conditions.

We’ve now had that time with the 720S, with our Miami office sampling the hardtop model, while Managing Editor Brandon Turkus and Editor-In-Chief John Neff spent some time with the Spider variant. And after testing this McLaren on our assorted home turfs, well, our praise remains universal. In fact, the main issue we saw during testing in Detroit, Cleveland, and Miami is one that all supercars have: they’re just too darn popular.

I had the opportunity to drive the McLaren 720S Spider, but I don’t think the fact it was a Spider, or convertible in layman’s terms, is worth mentioning. I’m not a fan of convertibles myself, and the 720S Spider is a hard-top convertible, so with the top up it’s basically the same as the coupe.

Instead, the wow factor of any 720S, regardless of roof type, is its performance. This McLaren required me to recalibrate my definition of “fast,” “powerful,” and “thrilling” when it comes to talking about cars. In fact, I was forced into giving rides to a queue of family members so each could experience the rush of flat-out acceleration in the 720S.

As remarkable as the performance envelope of the 720S is, though, its daily drivability was even more surprising. Having driven a number of six-figure supercars, I was expecting to put up with a lot of foibles for the privilege of piloting such a machine. To the contrary, the 720S was relatively easy to get in and out of, its controls normal and fairly easy to operate, and its demeanor on-road surprisingly forgiving.

The 720S has three drive modes: Comfort, Sport, and Track. Comfort mode genuinely made a difference and was the single biggest contributing factor to the car’s civility. In Comfort mode, the suspension, which is designed to be as firm and communicative as possible in Track mode, was remarkably pliable. It’s no ‘90s Cadillac, but it’s the best ride in a supercar I’ve ever experienced.

This comfort factor made me want to get behind the wheel as much as possible during my time with the 720S, which was great. What wasn’t so great was the unwanted attention that comes with driving such a machine. For one, the 720S announces itself to the neighborhood upon startup, and generally is a loud machine during operation. Once the noise makes heads turn, the gorgeous design keeps them gaping. The 720S is no wall flower, and whether you’re an extrovert or not, you’ll become incredibly popular while driving one.

Such are the slings and arrows that supercar owners must endure. I have a little more sympathy now for them, though, having experienced the sort of attention they get.

Like our head honcho, I tested the 720S Spider, not the hardtop that our team in Miami enjoyed. And frankly, that’s for the best, because the convertible McLaren 720S is just plain better. The important bits: there’s a folding hardtop that raises and lowers in just 11 seconds and at speeds up to 30 miles per hour. But the better part is that McLaren hasn’t sacrificed the 720S’ style or rigidity to add the stowable hardtop.

With the roof in place, the 720S Spider is almost indistinguishable from the coupe in profile. The convertible is every bit as pretty. But it’s also more versatile than the Coupe, too. Along with a glass roof, also available on the 720S Coupe, the Spider’s rear window lowers too. That means drivers can soak up the delicious sound of the twin-turbocharged V8 without lowering the roof. Combined with an available, dimmable glass panel, the 720S Spider does a good impression of a convertible without even having to lower its roof.

As for my least favorite thing… Yeah, I can’t really think of one. Yes, the 720S is expensive – my tester sat around the $411,000 mark – and hand-built British cars are hardly synonymous with long-term mechanical quality, but I wouldn’t hesitate to drive this McLaren every day. Hell, toss a set of winter tires on there and I’ll even drive it through a Michigan winter. It’s such a monumentally good, complete, endearing car that even the tiny annoyances listed by my colleagues pale in comparison to how enjoyable the 720S is to drive and live with.

I just wish the other motorists would let me enjoy it.

Now yes, I know that driving a mid-engine convertible supercar isn’t a car for shrinking violets. But what starts as endearing – kids waving and taking pictures from the backseat of their parents boring crossover, for example – can get scary fast. I had to make multiple emergency lane changes after drivers, trying to take a picture while going down the highway, inadvertently started drifting into my lane.

A car like the 720S is also a magnet for every douchecanoe that’s into cars. I’m happy to show it off when parked – I attended three cars and coffees during my time with the 720S – but on the road, leave me the hell alone. I don’t give a damn about your fart-canned Civic or the Charger Scat Pack you took a 96-month loan to buy, so please stop flying up on my ass or trying to provoke me into dropping a gear. If you spot one of these on the road, admire it, but leave the pilot alone – the last thing they’ll want to do is take their $400,000 car into the body shop because some boob in a Mustang ran in to me.

My first time in a McLaren 720S was eye-opening. It only took a few seconds, barreling down the front straight of Thermal Raceway in California, for the 720S to take its rightful place atop my list of “best cars I’ve ever driven.” The G forces while unwinding its twin-turbocharged 4.0-liter V8’s 710 horsepower, pedal nearly flat to the floor, were incomparable. The scalpel-sharp steering was other-worldly, too. And the advanced suspension reacted brilliantly at every turn.

But more recently I learned that the McLaren 720S makes for a pretty decent daily driver as well. My second go in the McLaren 720S – this time on the streets of Miami – felt no less special than the first. The 720S and I didn’t spend any time on the track together, much as I had hoped, but instead endured what other 720S owners might on the bumpy, ill-kept roads of Miami on a daily basis.

First thing I realized is that the same chest-caving speed still applies, even here. A brief mashing of the gas pedal between stoplights, dodging potholes, flashed brief memories of my time with the 720S on track. It’s absurdly, unfathomably, damn-near-illegally quick. The tail-end of every straight-line sprint requires a deep breath and regathering as your organs fall back into place.

The ridiculously quick steering is still a point of emphasis, too, even when it’s used almost exclusively for dodging pedestrians and avoiding roadkill. The 720S responds to inputs in a split-second, pretty much pre-determining where you’d like to go. It’s a little bumpy over rough roads, sure, but that’s not exclusive to McLaren nor unexpected for the locale and class.

The only thing that prevents the McLaren 720S from being damn near perfect is its finicky touchscreen. It looks gorgeous but doesn’t respond as well to inputs as it should on a six-figure supercar. Other companies do a better job of including quick-responding, touch-capacitive screens in its cars.