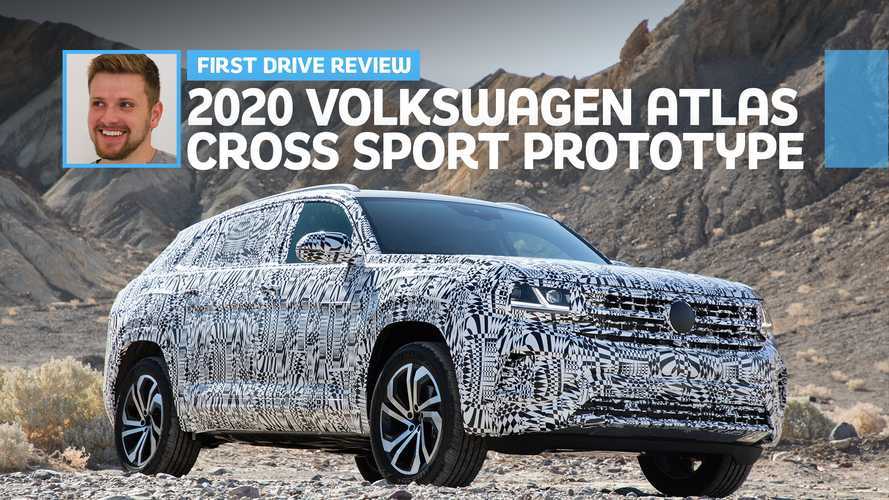 A noteworthy new contender in the crossover coupe niche.

Death Valley in July borders on unbearable, with the temperature read-out on our vehicle's digital instrument cluster relaying a heat-stroke inducing 108 degrees Fahrenheit (but it's a dry heat). Every year, automakers turn this searing California desert into a real-world sandbox for hot-weather testing. In this instance, we grin and bear the brutal temps to get an early glimpse at the upcoming Volkswagen Atlas Cross Sport prototype; a two-row riff on the current Atlas crossover SUV.

Those familiar with the Atlas will immediately find solace in the driver's seat of the Cross Sport. The dash layout is virtually identical. The optional digital instrument cluster (albeit, updated here), central touchscreen, and regrettably, hard plastic on the door panels and dash all carryover. The only thing that's notably different is the steering wheel. The Cross Sport's thinner, three-spoke wheel feels better formed than the current, chunkier three-spoke option on Atlas. Its buttons are easier to use, too.

The exterior looks to the Atlas Cross Sport concept for inspiration, with the most obvious updated cues being the sloped roofline and revised rear profile. But even under camouflage, it's easy to distinguish the concept-inspired facial features, particularly the revised front fascia with larger lower vents, sleeker grille, and new headlights. The 900-lumen LED beacons are specific to the North American market Cross Sport.

There's a vehicle in these images, we promise.

Outside of styling, the two SUVs share Volkswagen's MQB platform and identical 117.3-inch wheelbase. Only, the Cross Sport is 5.7 inches shorter than the standard Atlas, as it trades its third row for a coupe-like sloping roofline and superior dynamics instead.

The Cross Sport's shrunken size and mildly tweaked rear suspension (though, engineers neglected specifics) make it feel more agile. Though, elsewhere, things like steering calibration and throttle response haven't changed. Where the standard Atlas suffers from a too-spongey suspension and a heap of body roll, the Cross Sport feels more solid, and thus, more fun to toss around – both on-road and off.

A short seven-mile stretch of dirt road allows us to sample VW's 4Motion all-wheel-drive system in Off-Road mode, as well as its built-in hill descent control, which limits the car to 15 miles per hour on steeper downhill stretches. Though it may compete with more-rugged options like the Jeep Grand Cherokee and Toyota 4Runner, the Cross Sport definitely isn't Moab ready. But given this Atlas’ shorter rear overhang and revised front bumper, it has better approach and departure angles than the traditional version and handles loose gravel decently enough.

Where the standard Atlas suffers from a too-spongey suspension and a heap of body roll, the Cross Sport feels more solid.

Available with either the Atlas's turbocharged 2.0-liter four-cylinder or its larger 3.6-liter V6, the base Sport Cross produces 235 horsepower and 258 pound-feet of torque, while the optional V6 offers 276 hp and 266 lb-ft. Both engines pair with an inoffensive, smooth-shifting eight-speed automatic and offer optional all-wheel drive.

Our time is in the more powerful V6 option. But as with the traditional Atlas, power from the Cross Sport's 3.6-liter engine isn't game-changing – it's barely average, at best. The standard Atlas provides maximum twist at 2,750 RPM and peak horsepower at 6,200, and the Sport Cross should do the same. But in both applications, the V6 lacks the equivalent low-end torque of turbocharged alternatives.

For towing especially, we'd fancy a few more pound-feet. With the available towing package – which adds an 800-kilowatt radiator (up from 600-kilowatts), a 180-amp alternator (up from 140 amps), upgraded stability control, and trailer control, among other features – VW rates the Cross Sport at 5,000 pounds, equal to the Atlas. But even with a 3,500-pound Airstream behind our prototype, at a 9,000-foot maximum altitude dawdling through the eerie Cerro Gordo ghost town, the Cross Sport struggles to get up to speed. Once there, though, it doesn’t feel short on power.

Our brief time in the Atlas Cross Sport prototype isn't enough to render a verdict compared to other five-seat crossover SUVs. But what's obvious is that VW intends to fill a niche that neither the Tiguan nor Atlas can (but other manufacturers already have). And with that in mind, the Atlas Cross Sport makes total sense. So far, it's a promising start.