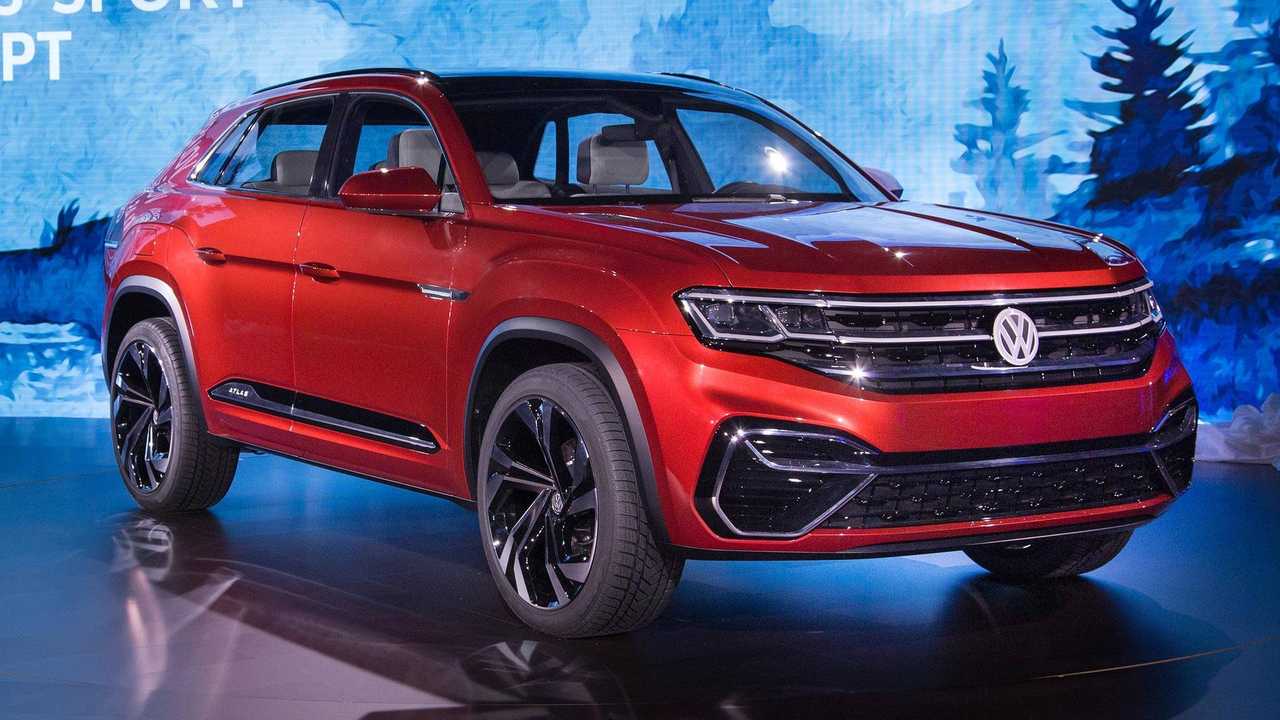 Set to enter production alongside the three-row Atlas in Tennessee in 2019.

Strip away that light-up front grille, downsize the 22-inch wheels a bit, and maybe exorcise a few pieces of chrome, and what you have here is Volkswagen’s next family crossover. The Atlas Cross Sport concept, debuting at the New York Auto Show, closely previews a five-passenger, two-row member of the Atlas family. The real thing is set to start production alongside the existing Atlas and the Passat in Chattanooga, Tennessee, next year.

And don't just take my word for it. At the Cross Sport's introduction tonight in New York, Hinrich Woebcken, CEO of Volkswagen North American Region, said it offers, "a very strong idea" of what the real thing might look like.

Volkswagen has made no secret of its intentions to add more crossovers to its range in a bid to woo SUV-crazed consumers. Last month, in fact, VW notes that the Tiguan and Atlas accounted for 54 percent of its U.S. sales.

The Volkswagen Atlas Cross Sport has the same wheelbase as the standard Atlas and shares its MQB modular platform, but is 7.5 inches shorter in length, giving it very short overhangs that lend the crossover an air of sportiness. The concept is also almost two inches lower in height and more than an inch narrower than today’s Atlas. With only two rows and seats for five, it bridges the gap between the current Atlas (three rows) and the Tiguan (two or three rows, depending on trim).

Up front, the Cross Sport concept looks a lot like the Atlas, with a wide two-bar grille that uses its light-up grille spears as running lights, with a straked hood and tough-looking plastic cladding around the fenders. It’s out back where the concept really diverges from its production big brother, with fat, angled C-pillars that produce an almost 45-degree angle for the rear window. With exhausts inset into the rear fascia, a full-width chrome spear across the liftgate, a roof spoiler, and noticeably flared rear haunches, the Cross Sport hints at a lot of performance from the rear three-quarter view.

In this case, performance means a 5.4-second sprint to 60 miles per hour and 26 miles of all-electric driving. That’s courtesy of a plug-in hybrid powertrain that combines a 276-horsepower 3.6-liter V6 (from the regular Atlas) that works alongside two electric motors; the front one delivers 54 hp and 162 pound-feet of torque, while the rear motor offers 114 hp and 199 lb-ft. A lithium-ion battery stores 18.0 kilowatt-hours of energy for the hybrid system. Total system output comes in at 355 hp.

Interestingly, Volkswagen says the Cross Sport, “could also feature a mild hybrid powertrain,” which may be a closer hint as to the powertrain we’ll see when the vehicle launches. In this case, VW says, a smaller battery pack of just 2.0 kWh would enable a total of 310 hp, with a 6.5-second sprint to 60. Either way, there will be five driving modes: E-Mode uses only the rear motor and the battery pack, Hybrid picks whichever power source is most suitable automatically, GTE is intended for sporty driving, Off-Road activates all-wheel drive by using both electric motors, and Battery Hold/Charge is intended for, as the name suggests, rejuvenating the lithium-ion pack.

There’s even more technology inside the cabin, where the Volkswagen Atlas Cross Sport concept has a larger display for its instrument cluster (12.3 inches) than its touchscreen infotainment system (10.1 inches). The former can show all manner of driving, entertainment, and navigation data. The infotainment system, as on other Volkswagen models, will have proximity sensors and gesture controls, with 2D or 3D navigation mapping among its many features.

We’ll have to wait some time to see just how close the production model’s design stays to this concept, and whether either of the aforementioned hybrid powertrains reach showrooms. But with the introduction of this Cross Sport concept, it’s clearer than ever that Volkswagen is making a big push in the crossover segment.

Wolfsburg / New York (March 27, 2018) — Volkswagen is about to ignite the next stage of its global SUV strategy. After recently showing the new Touareg in Europe and China, Volkswagen is now debuting a new version of the Atlas SUV at the New York International Auto Show: the Atlas Cross Sport concept.

The new Atlas Cross Sport concept is a five-seat version of the midsize SUV that went on sale in the U.S. in 2017 as a seven-seater. The near-production concept car features a coupe-like profile, an even sportier stance, and a plug-in hybrid drivetrain with 355 horsepower and an anticipated 26 miles of all-electric range. A conventional mild hybrid version of the same powertrain would make 310 hp. The actual production vehicle is scheduled to be launched in the U.S. market starting in 2019, and will be built alongside the seven-passenger Atlas and the Passat sedan in Chattanooga, Tennessee.

An innovative range of SUVs is an important element in Volkswagen’s growth strategy for the U.S. market, alongsidenewproductssuchasthe2019Jetta. ThelatestsalesfiguresshowtheimportanceofthenewSUV models: In February, 54 percent of Volkswagen’s American customers chose a Tiguan or an Atlas. Volkswagen of America will further increase the market share of its SUV fleet with new models such as the production version of the Atlas Cross Sport concept and the all-electric I.D. CROZZ that has been announced for 2020.

The concept vehicle is 190.8 inches long, 68.3 inches tall and 79.9 inches wide. The powerful exterior is marked at the front by a two-bar grille instead of the three bars on the seven-passenger Atlas. In both vehicles, the LED headlights and LED Daytime Running Lights (DRLs) are an integral part of the radiator grille and a key feature of the new midsize Volkswagen SUV family. Unlike the Atlas seven-seater, the grille crossbars are also illuminated in white and operate as LED DRLs.

The profile of the Atlas Cross Sport concept combines powerful proportions with sleekly raked C-pillars, as well as short front and rear overhangs. The roof spoiler, which has black side fins, is another distinctive element. The way that the character line transitions directly into the wide, flared wheelarches serves to emphasize its power and presence.

The rear wheelarch on the driver's side features the ‘filler cap’ for connecting the charging plug for the lithium- ion battery; the one on the other side houses an actual fuel filler neck. The 22-inch aluminum-alloy wheels, which are shod with 285/40 tires, have high-gloss polished spokes for a truly premium look.

After flowing through the wheelarches, the character line transitions into an aluminum accent at the rear of the vehicle. LED taillights are positioned above this trim line. The horizontal design motif continues with an aluminum trim piece that extends laterally across the bumper, and into exaggerated tailpipe surrounds, which mirror the taillights above. The vehicle features a low sill height of 33.3 inches for ease of loading.

Inside the Atlas Sport Cross concept, the horizontal design remains dominant, emphasized by the instrument panel and infotainment screens. The infotainment system touchscreen is located high on the instrument panel and is seamlessly integrated. The driver and front passenger can manage all infotainment functions and the basic vehicle configuration via a 10.1-inch touchscreen with proximity sensors and gesture control. The layout of the graphics changes depending on which driving profile is selected— ‘Snow,’ ‘Sport,’ ‘On-road’ or ‘Off- road’.

Navigation data can be displayed in a two-dimensional or three-dimensional form. In the 3D view, the user has the option of configuring an individual display layout, which can be done on three or more levels that hover above one another in virtual space. Each level shows the map and position of the vehicle, but with different information. On the top level, the driver can configure the Points-of-Interest (POI); the middle level has geographic information such as the current elevation above sea level; the lower ‘Car’ level shows the route and the position of the vehicle.

The 12.3-inch Volkswagen Digital Cockpit has a resolution of 1,440 x 540 pixels, enabling sophisticated and interactive graphics. These graphics change according to the selected drive mode—for instance, if you are in

‘E-Mode,’ driving on electric power. The Digital Cockpit display can be reconfigured to show information on driving, navigation and assistance functions as necessary. The driver can also transfer data shown on the touchscreen, such as telephone contact images or CD covers, to the display.

The area below the infotainment system and the Digital Cockpit is upgraded by a horizontal trim strip made of brushed aluminum, which runs across the whole width of the interior. As with the infotainment system, a touchscreen is used for climate control settings, including those for the seat heating and ventilation.

On the left-hand side of the center console, the selector lever for the 6-speed DSG® automatic transmission has shift-by-wire functionality. It is always in a central position. Short clicks activate the ‘R,’ ‘N’ and ‘D’ settings. A separate button integrated in the selector lever is used to switch to the ‘P’ position.

Behind the DSG shift lever is the 4MOTION® Active Control that offers ‘On-road,’ ‘Off-road,’ ‘Sport’ and ‘Snow’ driving profiles. This selector has a high-tech design with an HD display and transparent ‘light pipe’ elements that conduct LED light. Between the DSG selector lever, driving profile selector and cupholders are the black hard keys for ‘ESC,’ ‘E-Mode’ and ‘GTE-Mode’ and the aluminum ‘Start/stop engine’ button. Two cupholders are positioned to the right of the DSG selector lever where they are easily accessible.

There is one more functional console in the front of the cabin. In the roofline area, there are touch buttons that control the panoramic glass sunroof, a matching sunshade and interior light functions.

Since the Atlas is based on Volkswagen's modular transverse matrix (MQB), it can be built with all manner of drive systems, including a plug-in hybrid drivetrain. The Atlas Cross Sport concept uses the same 3.6-liter V6 FSI® engine as the Atlas, making 276 horsepower and 266 pound-feet of torque. In the Cross Sport concept, this engine is boosted by two electric motors. The front motor develops 54 hp and 162 lb-ft, and the rear motor makes 114 hp and 199 lb-ft.

Energy for the motors is supplied by a compact 18.0 kWh lithium-ion battery housed in the center tunnel. The drive system's total power amounts to 355 hp, which potentially enables the Cross Sport concept to accelerate from 0 to 60 mph in just 5.4 seconds. The top speed is 130 mph.

The Atlas Cross Sport concept could also feature a mild hybrid powertrain. Using the same V6 engine and electric motors, but with a smaller 2.0 kWh battery, the mild hybrid version would produce 310 horsepower and give 0 to 60 mph acceleration in 6.5 seconds. The top speed would remain at 130 mph.