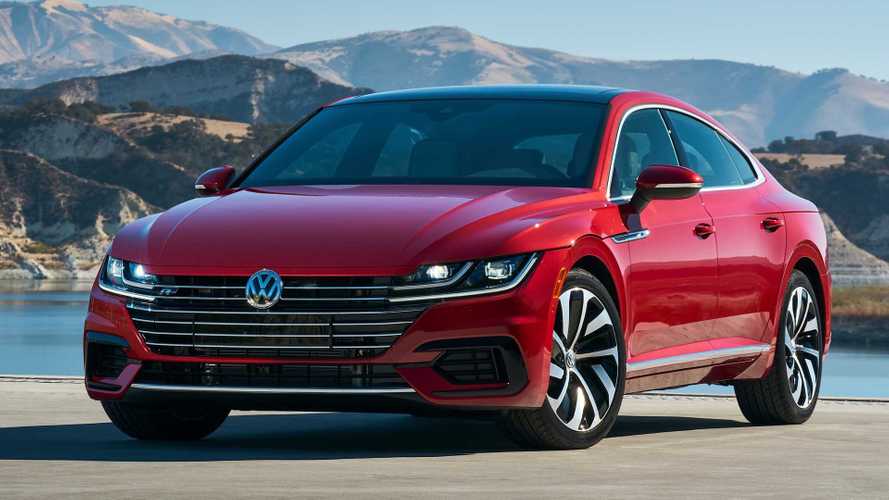 There’s a divide among large, near-luxury sedans. On one end rest conservative, comfort-oriented vehicles such as the Buick LaCrosse and Toyota Avalon. On the other sit more stylish, enthusiast-leaning options such as the Kia Stinger and Nissan Maxima.

Rather than committing to one perspective, the latest addition to the Volkswagen lineup takes the centrist’s approach and combines elements from both sides of the segment’s ideological spectrum. Welcome the 2019 Volkswagen Arteon.

As the spiritual successor to the Volkswagen CC, the Arteon wears slinky sheet metal that blesses it with low-slung, coupe-like looks. A 5.0-inch longer wheelbase, 2.3 inches of extra body length, shorter front and rear overhangs, and a rakish rear hatch emphasize the model’s sultry styling relative to its hatch-less predecessor.

The Arteon’s large footprint directly benefits interior space, where rear-seat passengers enjoy 40.2 inches of legroom: a mere tenth of an inch less than the class-leading Toyota Avalon and a substantial 2.9 inches better than the old CC. Headroom improves as well, and the Arteon’s 37.0 inches betters that of the CC by 0.4 inch. It’s still a smidge tight for those over six feet tall, but average-size passengers won’t complain about overhead space.

Unlike the CC, average-size passengers won’t complain about overhead space.

Such space comes at a cost, literally, and the $35,845 Arteon sports the most expensive starting price in its segment. That sum nets standard niceties such as 18-inch wheels and tires, a proximity key with push-button start, an 8.0-inch touchscreen infotainment system with Apple CarPlay and Android Auto compatibility, a three-zone climate control system, heated front seats, and a blind-spot monitor. Adding features such as an in-dash navigation system, a sunroof, leather seats, adaptive cruise control, and a 12.3-inch digital instrument cluster requires jumping up from the entry-level Arteon SE to the $39,995 SEL. Meanwhile, the $44,945 SEL Premium adds a heated steering wheel, a massaging driver’s seat, ventilated front seats, heated rear seats, a power rear hatch, and additional driver assistance systems (lane-keeping assist, a surround-view camera, automatic high-beam headlights, and parking assist) to the mix.

Regardless of trim, every Arteon relies on a 268-horsepower turbocharged 2.0-liter inline-four for motivation. With little turbo lag and a substantial 258 pound-feet of torque available at a low 1,950 rpm, the four-pot pushes the Arteon forward with reasonable swiftness. An eight-speed automatic transmission is the only gearbox on offer and it fades into the background as it quickly and quietly channels the engine’s grunt to the ground.

While front-wheel-drive is the default setup, Volkswagen’s 4Motion all-wheel-drive system is available as a $1,800 option on SE and SEL models and comes standard on the top-line SEL Premium. The setup works seamlessly and sends as much as 50 percent of the car’s power to the rear axle.

On the twisting mountain roads outside of Solvang, California, the all-wheel-drive Arteon SEL Premium predictably rotates around turns like a supersized Volkswagen Golf. No surprise, really, given the Arteon and Golf both ride on the brand’s stiff MQB platform.

Despite its forgiving ride quality, the Arteon is still reasonably enjoyable to toss around.

Further assisting the Arteon’s handling dynamics are its standard adaptive dampers that allow the hatch’s ride quality to go from cushy and comfortable to firm but congenial at the push of a button. In fact, Volkswagen offers 12 different damper settings for the driver to choose from, which seems like overkill given the moderate difference between the softest and stiffest setups (not to mention this car’s middle-ground status as a sports sedan).

Despite its forgiving ride quality, the Arteon is still reasonably enjoyable to toss around. Its steering weighs-up nicely in turns when left in the Normal or Sport drive modes (it’s almost completely devoid of feedback in Comfort mode) and its brake pedal engages the binders predictably and fluidly after pushing past an initial soft spot.

No, the Arteon is not as quick or engaging as the rear-wheel-drive-based Kia Stinger. However, it’s more entertaining to drive than the likes of the Avalon or Maxima (admittedly, that’s not a high bar).

Still, the Arteon isn’t free of demerits. While the car’s forced induction four-cylinder is plenty powerful for most driving, I still ache for a hotter model with a powertrain that rivals the 365-hp twin-turbocharged V6 in the Stinger GT. This desire grows every time I exit the car and look at the more aggressive front fascia, rear lip spoiler, and 19-inch wheels and tires that make up the $1,265 R-Line package (an option on all trims that’s also available with 20-inch wheels for an additional $500). The Arteon R-Line certainly looks the part of a tried and true sports sedan, even if its dynamics are less reflective of this.

Furthermore, the Arteon’s cabin is disappointingly plain. Although it’s lined in soft-touch plastics and features top-notch build quality, the interior’s ambiance lacks the drama of the exterior, and the car’s anonymous-looking insides fail to push any design boundaries. That said, the Arteon is luxury-car quiet at speed, and Volkswagen’s infotainment setup remains an ergonomically friendly system that displays crisp and clear graphics on its 8.0-inch dash-mounted screen and available 12.3-inch digital gauge cluster.

These are minor quibbles, though, and the Arteon generally succeeds as a flagship vehicle for the Volkswagen brand. Sure, an Avalon’s rear row is a little roomier and a Stinger is more enjoyable to drive with fervor, but the Arteon threads the needle between these two cars by combining space, comfort, and a reasonably engaging driving experience in a gorgeous wrapper.