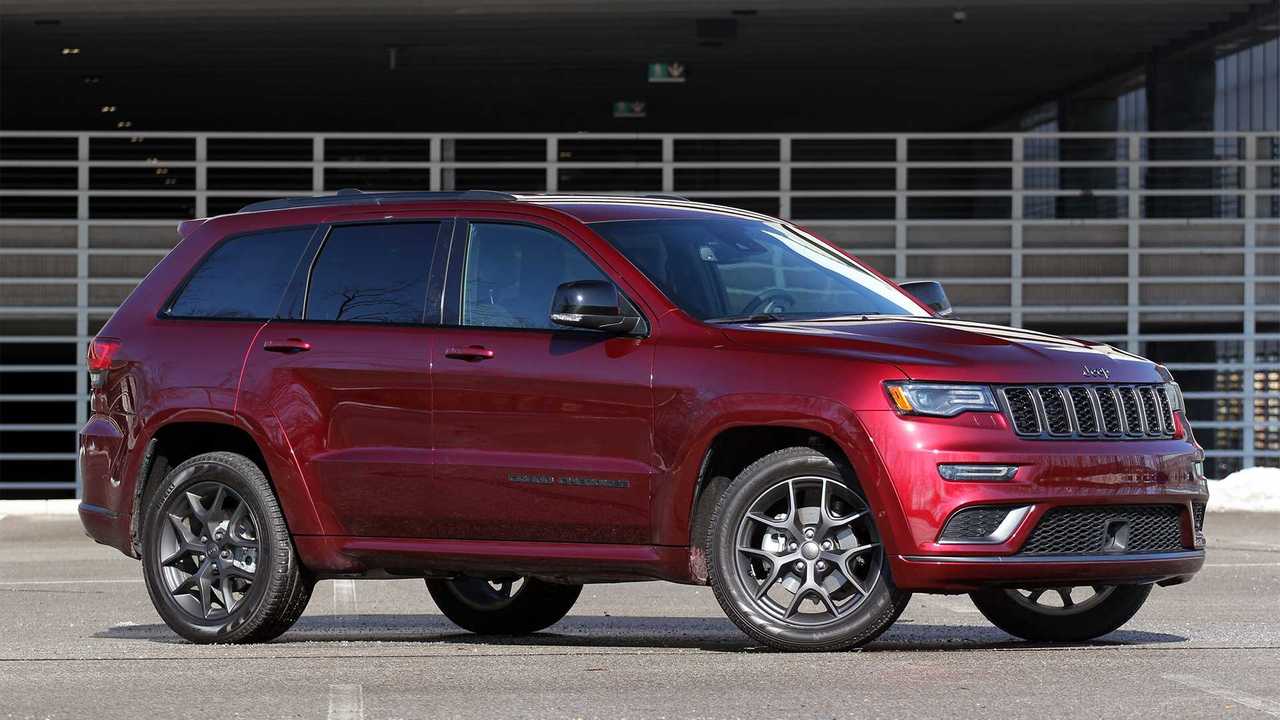 Eight years on the market and the fourth-generation Grand Cherokee still impresses.

The Jeep Grand Cherokee is a fantastic mid-size SUV. What we’re reviewing here is the Grand Cherokee Limited X model, which is a brand new trim level for 2019. The distinction is important to note, as generally, we think higher of the Grand Cherokee than the overall score for this model of 6.0 stars suggests.

Fortunately, all that makes the Grand Cherokee worthy of praise is here on the Limited X: its timeless design, its honest-to-goodness off-road ability, and its class-leading UConnect infotainment system. Unfortunately, the Limited X model tacks on aesthetic changes that arguably don’t improve the GC’s already handsome style nor impart any functional benefit to either its on-road performance or off-road capability.

One thing that makes the Grand Cherokee different, and we argue better, than its competition is that it offers no less than 11 different trim levels, ranging from the base Laredo to the 707-horsepower, Hellcat-powered Trackhawk that starts at $86,650. In between are more specialized trims for various grades of luxury (Summit), off-road capability (Trailhawk), and performance (SRT and Trackhawk).

The Limited X slots somewhere in the middle of the Grand Cherokee’s model range with a base price of $43,845. It’s based on the $38,945 Limited model and adds a host of exterior and interior upgrades. Items such as special 20-inch “Granite Crystal” wheels, “Granite Crystal” exterior accents, black trim pieces, and a black leather interior account for the $4,900 difference between the two trim levels. Oh, and it also includes the hood from the Grand Cherokee SRT with its oversized flaring nostrils. Add to that Jeep’s Advanced Active Safety Group ($1,495), an upgraded stereo with active noise cancellation ($795), and a hefty $1,495 delivery charge, and the as-tested price of this 2019 Grand Cherokee Limited X rises to $49,630.

That final tally doesn’t include the Grand Cherokee’s 5.7-liter V8 engine, which would cost an additional $3,295. Instead, this particular Limited X is motivated by the Grand Cherokee’s base 3.6-liter V6, which means any allusion to performance made by the new exterior styling is merely skin deep.

Believe it or not, this current generation of the Grand Cherokee has been around for eight years. It’s been refreshed a time or two, but the basic design is the same as it was when it debuted. Nobody’s complaining, as the Grand Cherokee’s styling epitomizes the look of the modern SUV: rugged and masculine, yet refined and tasteful. Jeep could go on selling this look for another eight years and we wouldn’t complain.

The Limited X model, though, plays with the Grand Cherokee’s design in ways that are sometimes questionable. The overall color palette is dark with all trim, grille, and non-body-color pieces cast in black, “Liquid Titanium,” or the Limited X’s exclusive hue of “Granite Crystal.” The theme isn’t as dark as, say, Nissan’s murdered-out Midnight Edition models (especially with my tester’s lighter Velvet Red Pearl-Coat paint color), but all bright and shiny elements have been banished. The same goes for the monotone interior that features black leather, black high-grade plastics, and dark faux-wood accent pieces.

And then there’s the Limited X’s calling card: the hood it borrows from the considerably more exciting SRT performance model. On the SRT, the hood and its extra-large dual nostrils serve the functional purpose of clearing the engine bay of heat. Heat dissipation, though, isn’t a problem from which the Limited X suffers, especially the V6-powered version. Instead, the SRT hood is meant to be visually impressive, but is it? The hood is so high that most people, unless they’re over six feet tall, might never notice those impressive vents.

In general, the Grand Cherokee is a comfortable crossover. Only the models built for a specific purpose compromise their comfort to a degree. The offroad-optimized Trailhawk trim, for instance, and the high-performance SRT and Trackhawk models sacrifice some ride comfort in pursuit of their lofty limits. The Limited X, though, is designed for neither on-road performance or off-road pursuits, yet its relatively large 20-inch wheels with all-season 265/50R20 Pirelli performance tires create a firmer ride without much benefit (unless you count merely looking cool).

Otherwise, the seating and spaciousness inside the Limited X is as good as any other Grand Cherokee, which is to say above average. It’s not the largest mid-size crossover, but it’s plenty large for a family of four’s daily-driving duties. Likewise, the seats themselves are comfortable and there’s enough passenger space that no one should feel cramped unless a fifth comes along for the ride. Cargo capacity, meanwhile, is also plentiful compared to the class, with 36.2 cubic feet of space available behind the second row and a maximum of 68.3 cubes when it’s folded.

As with nearly all FCA products, the Jeep Grand Cherokee Limited X earns high marks in this category for using the automaker’s UConnect infotainment and navigation system. In fact, the version of this system used in the Grand Cherokee might be FCA’s best. For 2019, the screen itself is now bonded glass and nearly flush-mounted, and it features a higher resolution and pinch-to-zoom functionality. Aside from the mega-sized vertical screens used for high-end UConnect systems in the Ram 1500, the latest 8.4-inch display might be our favorite UConnect system to date.

In addition to its top-notch infotainment system, the Grand Cherokee Limited X also comes standard with Apple CarPlay and Android Auto, a seven-inch color information display between its gauges, an optional Harman Kardon stereo with active noise cancellation, and a 4G LTE-powered WiFi hotspot. The only thing conspicuously absent from its tech catalog is wireless charging for your smartphone, which isn’t available on any trim level.

If you want a high-performance version of the Grand Cherokee, you have two excellent options in the 475-hp SRT and 707-hp Trackhawk models. The Limited X may somewhat look the part of a high-performance SUV, but that impression flits away once you’re behind the wheel.

Paired with the Grand Cherokee’s base 3.6-liter V6 that produces 295 horsepower and 260 pound-feet of torque, the Limited X doesn’t have a lot of grunt to get its 4,576 pounds moving. The eight-speed automatic does its job well, but can’t make up for power that just isn’t there, even when its Sport mode is engaged. That said, this V6 engine does deserve a high five for its impressive maximum tow rating of 6,200 lbs, which is a good bit more than the 5,000-lb limits we’re used to seeing from unboosted V6 engines.

In terms of handling, braking, and steering, the Limited X is aided in this regard by its more aggressive wheel-and-tire combo. As mentioned earlier, it contributes to a stiffer ride that, while less comfortable overall, does make the Grand Cherokee’s handling more confident with slightly higher limits of adhesion in turns. That said, it’s still miles away from the performance limits of the SRT model, let alone the Trackhawk.

For 2019, the Grand Cherokee has upped its safety game by making blind-spot monitoring with rear-cross-path detection standard on all trim levels. On the Limited X model, more features such as Ready-Alert Braking, which primes the brakes for full stopping force when it detects an emergency situation, and rear parking sensors with automatic stopping, which brakes the Jeep when an object is detected behind the vehicle, are also standard.

On top of that, my Limited X tester also comes with the Jeep Advanced Safety package for $1,495 that adds advanced active safety features such as adaptive cruise control with stop-and-go capabilities, collision alert with automatic emergency braking, lane-departure warning with lane-keep assist, and a park assist system that works with both parallel and perpendicular spaces.

While the 2019 Grand Cherokee has yet to be crash-tested by either the National Highway Traffic Safety Administration (NHTSA) or the Insurance Institute for Highway Safety (IIHS), the 2018 model didn't fare to well in crash testing, and earned a so-so four out of five stars overall from the former and failed to earn a Top Safety Pick designation from the latter.

One benefit of opting for the Grand Cherokee’s V6 over its optional V8 is fuel economy. The efficiency gap between the two is significant, with the V6 earning a combined fuel economy rating of 21 miles per gallon from the Environmental Protection Agency (EPA) and the V8 only managing 17 mpg combined. Mind you, these are for Grand Cherokees equipped with all-wheel drive; foregoing that will increase your fuel economy a notch in both cases. The V6 doesn’t require premium fuel either, while the V8 recommends premium but doesn’t require it.