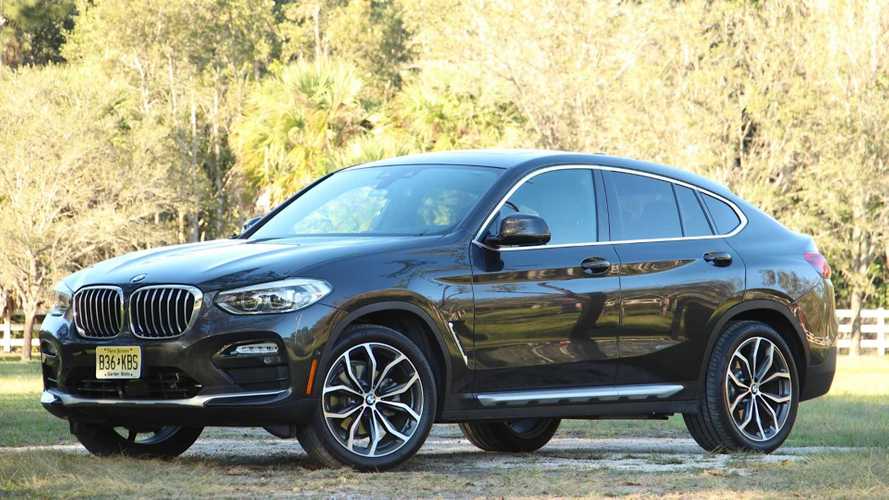 Business up front; party in the back.

For most people, the ideal crossover checks three important boxes: Space, comfort, and efficiency. Or at least, one of those three. But the new-for-2019 BMW X4, as with most crossover coupes, throws conventional crossover thinking out the window.

The standard SUV looks of the X3 get swapped for sleek fastback styling instead, the spacious boot disappears in place of a shrunken trunk, and in an effort to add a pinch of sportiness to the X4, BMW stiffens up the suspension. On paper, it sounds promising, but the end result is a mishmash of mediocrity.

At $50,450, the BMW X4 is a few thousand dollars more expensive than its closest competitor, the Mercedes-Benz GLC 300 4Matic Coupe ($47,300). But BMW's somewhat more streamlined option list helps alleviate sticker shock. For example, the X4 only has two design package options: The xLine Design and M Sport Design (available on both the 30i and 40i). The former comes standard and keeps most of the grey body cladding, while the latter adds unique wheels, a handful of M badges, and an extra $2,720 to the overall asking price.

There are three optional tiers: Convenience ($1,000), Premium ($2,600), and Executive ($5,850) as tested. Convenience adds features like keyless entry and lumbar support, Premium tacks a heated steering wheel and Gesture Control on to that, and Executive includes all that plus park assist, birds-eye view, automatic high beams, and a bit more. Outside of that, there are seven optional paint jobs ($550 each), one set of optional 20-inch wheels ($950), and a mix of other safety and convenience features like wireless charging and a Wi-Fi hotspot ($400), a Harman Kardon surround sound system, and adaptive cruise control ($1,200), among others.

Granted, BMW is still the king of nickel-and-diming, but with an as-tested price of approximately $61,270 (after $995 for destination) for a fully loaded X4 with the Convenience package and options like wireless charging and adaptive cruise, it isn't outrageously expensive for all that you get. Then again, the more-powerful M40i model starts at $60,450...

The X4 isn't what we'd call “conventionally attractive." Like most crossover coupes, its proportions are off-putting. And not even its individual elements do anything to counteract the quirky body style. The X4's nose is too fat, its butt is too stubby, its optional 20-inch wheels ($950) are too large, and the tall ride height combined with the sloped roof makes it look like a tortoise on stilts.

That said, there are some things we like about the X4's new look. The sharp taillights (new as part of the 2019 refresh) are great, and help elongate the otherwise dumpy rear; the trademark kidney grille paired with the gaping lower grille gives the X4 a more aggressive face; and the optional Dark Graphite ($550) finish is really nice. The X4’s exterior gets high marks for its uniqueness, but otherwise, it's pretty unattractive.

The cabin is visually a much nicer thing to look at. It doesn’t stray far from BMW’s conventional styling, most of the elements are simple, straightforward, and covered in both black leather, and in this case, silver trim pieces.

The X4 excels in comfort (more so than other areas, at least). The front seats and back bench are both soft and supportive – they’re perfectly comfortable for long bouts, while the Tacora Red Vernasca leather in our tester is hands down the best color you can get. Plus, it’s available at no extra cost.

But the back seats take a hit because of the sloped roofline. Even though the X4’s rear bench has a low mounting point, its 35.5 inches of legroom and 37.2 inches of headroom shave nearly one and two inches off the volume of the X3, respectively. At six feet, you'll come close to scraping your head on the roof, and the tiny rear window makes for horrid rear visibility.

BMW has upped its tech game as of late, and the X4 is proof of that. It has optional wireless charging, an optional Wi-Fi hotspot, a digital and analog instrument cluster, and seamless Apple CarPlay connectivity via Bluetooth. Android Auto isn't available, though, and you will have to pay extra for most of these features. CarPlay turns into an $80 subscription after a year, which is maddening.

With the optional Premium Tier, the X4 gets things like a heated steering wheel, a color head-up display, and gesture controls. Gesture controls – while an easy way to impress your friends, and conceptually, a good idea – rarely work as intended. Swirling your finger angrily at the touchscreen to increase volume returns mixed results, and the interchangeable “scissor” motion — which can either change the song or read out notifications — feels like an unnecessarily complex movement for such a simple function.

Outside of that, BMW's iDrive infotainment system is totally acceptable, if a bit outdated. The optional 10.3-inch touchscreen on its own is responsive and usable with easy pinch-and-zoom functions on maps and smooth scrolling. But the addition of the iDrive controller and tactile buttons for things like phone and media controls make it that much more functional and easy to operate.

It may wear a BMW badge, but there is something so off-putting about the way this crossover drives. Toss it into a corner and the X4 feels as heavy as the X3, even though it's lighter by a few hundred pounds. The steering rack is twitchy, and the stiff suspension (without the $1,000 Dynamic Damper Control), while relatively responsive, still yields a serious amount of body roll. The X4 feels as tall as it looks, and grip from its 19-inch Bridgestone all-season tires feels relatively low given their size and the crossover’s supposed focus on performance.

The turbocharged 2.0-liter four-cylinder is the X4's best asset. Outside of a hint of turbo lag, it's quite punchy. Paired with an eight-speed automatic transmission and all-wheel drive, the powertrain propels the X4 to 60 miles per hour in a decent 6.0 seconds, according to BMW. Numbers aside, the X4 feels quick.

The X4 has four driving modes: Eco Pro, Comfort, Sport, and Sport+. Eco Pro forcibly keeps fuel efficiency up by curtailing throttle response and keeping revs down so the powertrain takes advantage of its fuel-saving cylinder-deactivation system. Fuel economy sees a bump, sure, but it makes for a pretty poor driving experience.

Comfort mode is where the X4 shines – it's neither too sluggish nor overly aggressive, and gives the X4 a nice, floaty feel on the highway. Sport and Sport+ especially amplify throttle response and tighten up steering feel and damping. But Sport+ is arguably too agro – the X4's throttle and steering both feel unrefined in this setting.

The BMW X4 offers a solid amount of safety equipment… at a cost, of course. As part of the top-tier Executive package ($5,850), the X4 gets things like a semi-autonomous active park assist system, adaptive LED headlights, and a surround-view monitor with a kitschy 360-degree camera that allows the driver to see the entirety of the car, as opposed to simply a bird’s-eye view. But adaptive cruise control is another $1,200.

Once you shell out for all the safety equipment, though, you’ll be glad it’s there. BMW’s adaptive cruise control and lane-centering tech are impressive. We’d still give Mercedes-Benz a slight edge for its autonomous lane-changing abilities and streamlined functionality, but BMW’s semi-self-driving software isn’t far behind it.

The turbocharged 2.0-liter may be the least powerful of the X4’s two available engines, but it’s handily the most efficient. At 22 miles per gallon city, 29 highway, and 25 combined, the X4 bests its closest – and really only – competitor: the Mercedes-Benz GLC 300 4Matic Coupe (21 city/27 highway/24 combined). It even betters non-direct competitors like the Audi Q5 (22 city/27 highway24 combined) and Porsche Macan (20 city/25 highway/23 combined).