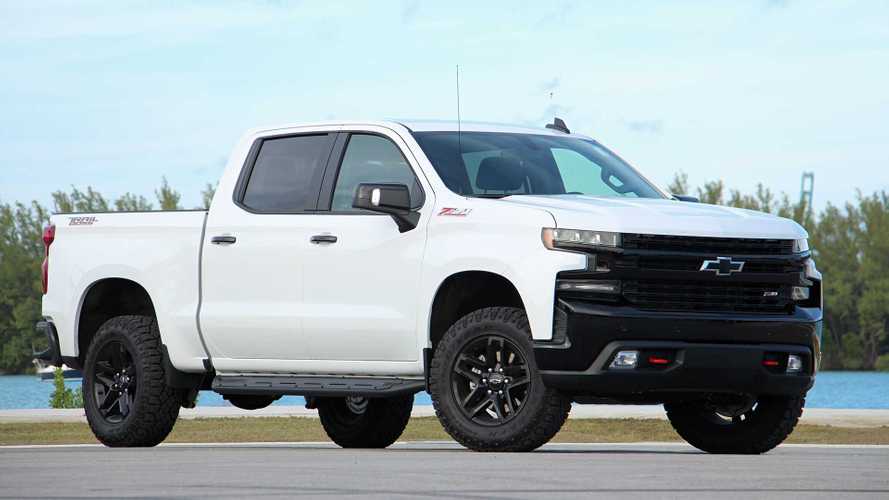 It has old-school truck cues, a bland interior, outdated tech, and an exterior that looks straight out of the Andromeda Galaxy.

But of the near $9,000 worth of options, you'd probably shell out for most of them. A $1,655 Convenience Package adds 10-way power-adjustable, heated front bucket seats with lumbar control, a heated steering wheel, USB ports in the second row, and a telescoping steering wheel. The Convenience Package II adds $1,420 to the price along with a power-sliding rear window, a 120-volt power outlet, HD radio, an HD rear vision camera, and a Bose sound system.

Leather is another $985, off-road steps are another $895, the safety package – equipped with front and rear park assist, lane change alert, and rear cross traffic alert – is another $895, bed protection is $635, a trailer brake controller is $275, and an advanced trailering package is $240.

The Silverado's squinty-eyed, mouth-agape, overstyled grille is awful. It's even worse when combined with a tiny front overhang, which pushes in the styling like a pug's nose. This truck is hard to look at. But in the Trail Boss trim, at least, it ditches all the chrome on the other three grille designs and swaps it for gloss black plastic instead. That doesn't make it good looking, just less offensive.

Tear your eyes away from that face, if you can, and the rest of the Silverado isn't nearly as offensive. It's actually kind of plain. There's a bit of sculpting on the side panels, and a sharp beltline that extends from the front window all the way to the rear taillight. Outside of a two-inch lift and bulky 18-inch gloss black wheels, the Silverado's subtle silhouette is a sharp contrast to that gaping maw.

Ugly as it may be, the new Silverado is an attention grabber. This truck garnered a shocking amount of praise on the street – mostly from truck guys and fellow Chevy bros calling it “tough” and “badass.” Opinions aside, it should appeal to truck buyers.

If the Ram 1500 and Ford F-150 didn't exist, the Silverado's straightforward cabin would be merely acceptable. But in today's upscale truck market, it's not good enough. The design itself is largely a carryover from the outgoing model – it’s outdated and littered with low-quality materials. Black plastic and cheap chrome finishes dot the dash and steering wheel and cover most of the center console. The eight-inch touchscreen nestles between a gaudy plastic chrome trim piece, and like the rest of the cabin, feels very cheap.

The layout, at least, is ergonomically sound. Hidden storage compartments under the front seats and within the rear bench are unique, and there are a number of USB ports – some directly under the infotainment screen, others within the center console, and even some in the back seat. The soft leather seats are a reprieve from the otherwise cheap finishes; the big, comfy buckets are electronically adjustable in 10 different ways (with the $1,655 Convenience Package), heated, and easy to settle in to for longer drives.

Outside of feeling like a bargain-bin afterthought, the eight-inch touchscreen infotainment system is at least easy to use. The on-screen graphics of Chevy’s Infotainment 3 system are crisp, clean, and distinguishable while driving. Android Auto and Apple CarPlay come standard on the Trail Boss trim, as does 4G LTE connectivity and a six-speaker audio system. HD radio, an HD rear vision camera, and a Bose premium sound system are offered on the Convenience Package.

Based on styling alone, buyers might mistake the 2019 Silverado hides some radical improvements. But, no, it’s still very old-school in its execution – it has a harsh suspension, a ton of body roll, and a V8 that echoes throughout the cabin (although it does sound rather nice). That’s not to say the 5.3-liter V8 is powerful, though. Despite its 355 horsepower and 383 pound-feet of torque, the base V8 is rather lackluster and lifeless compared to the much-better 6.2-liter unit we tested on the GMC Sierra (and offered on loftier Silverado trims), or even the 3.6-liter V6 on the Ram 1500. That said, the Silverado’s standard eight-speed automatic transmission is smart and smooth, and manages the V8’s available power well.

There are some other redeeming qualities to the Silverado, too. Steering feel is hugely improved – this huge truck actually responds when you want it to. And it’s lighter; Chevy engineers somehow managed to shave off as much as 450 pounds (depending on the trim). It feels like a generally more responsive truck, but it still has some catching up to do if it wants to be on par with the Ram 1500.

Safety isn’t the Silverado’s forte. But by Chevy standards, this new Silverado gets a big safety boost over the outgoing model. As part of the $890 Safety Package 1, the new Silverado has front and rear park assist, blind-spot monitoring, and rear cross traffic alert. But all of those features are standard on the 1500, and Ram’s version of the Chevy “Safety Package 1” includes things like adaptive cruise control, automatic emergency braking, and lane-keep assist. As is usually the case with Chevy, those features are restricted to the range-topping trims – in this case, they’re a packaged option on the LTZ and top-of-the-line High Country.

The EPA estimates the Silverado with the 5.3-liter V8 nets 16 miles per gallon city, 22 mpg highway, and 18 mpg combined. But with the big, knobby tires and a taller ride height, the Trail Boss loses one point in the city, two on the highway, and one overall.