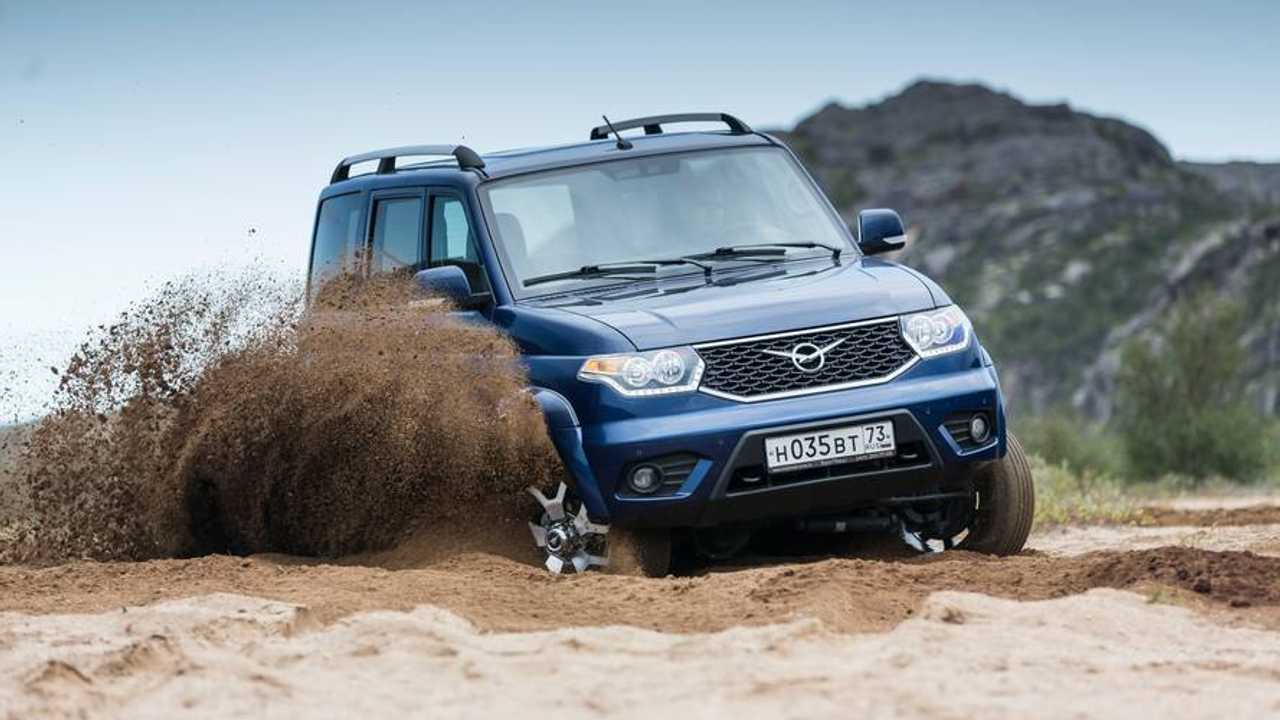 Russia’s other ultra-affordable off-roader gets some big updates.

Editor's Note: Fans of odd Russian vehicles, have we got a treat for you. Direct from Motor1's Russian edition comes this review of the UAZ Patriot, Mother Russia's other affordable, rugged off-roader. If you liked the Lada Niva or the newer Lada 4x4, you'll dig the Patriot.

It’s not known why the most popular model from Russia’s leading manufacturer of off-road vehicles, UAZ, is called the Patriot. Perhaps it’s because the company first appeared in Ulyanovsk during World War II, as a builder of trucks and SUVs for the Red Army. Not unlike the American Jeep brand, UAZ is something of a patriot itself. And like Jeep, this off-road brand serves a loyal group of owners both on and off-road, conquering nature and heading to the most remote corners of the vast Russian wilderness.

Although it’s one of the newer models to roll out of the Ulyanovsk Automobile Plant, about 550 miles east of Moscow, the Patriot has been in production for 13 years. And while it’s hardly the most advanced UAZ on the road, the company has kept it updated from year to year, addressing complaints and improving quality in equal measure.

Aside from restylings and technical improvements in 2014 and 2016, the Patriot's design has remained mostly unchanged since its debut in 2005. Changes over the years included new lighting, an updated grille, and a new front panel in the cabin.

The next update, although not the last (by March 2019, the Patriot should carry a four- or five-speed automatic), is similarly light. There’s a new metallic color (Blue Baikal) and a tweaked design for the 18-inch wheels. A new Expedition Package is also available and adds a winch, roof rack, a rear ladder, and BFGoodrich off-road rubber. These items were formerly part of a pricey special edition Patriot, but no longer – it costs about $3,050 to add to base Patriots or about $2,750 to any of the other trims.

Inside, there changes are minimal. Solid grab handles in the corners of A- and B-pillars aid with ingress and egress. But on the road, the passenger should keep their hands to themselves, rather than obstructing the driver’s view. Invisible to the eye but not the ear is the extra noise insulation in the firewall and fenders, which reduces engine and road noise. Somewhat.

The additional sound deadening helps with stones bouncing into the wheel wells and the rumble of the BFGoodrich rubber, but the Patriot’s more powerful engine and torquier engine is hard to hide. This new setup packs 150 horsepower and 173 pound-feet of torque from a 2.7-liter four-cylinder and is borrowed from the Profi truck. This is essentially an upgraded version of the pre-facelift Patriot’s engine, which is now relegated to fleet duty.

The “new” engine packs an extra 15 hp and 13 lb-ft of torque thanks to new pistons and a new cylinder head, heat-resistant exhaust valves, tweaked engine timing, and a compression ratio that’s been bumped from 9.1 to 9.8:1. There’s also a double-headed exhaust manifold, which UAZ refers to as “a spider.”

These small performance changes don’t reflect the revolutionary changes under the hood.

But in reality, these small performance changes don’t reflect the revolutionary changes under the hood. What does is the drop in peak torque from 3,900 rpm to just 2,650 rpm. Finally, the Patriot drives well and confidently from middling revs, pulling perfectly well off-road in second and even third gear at very low speeds. It overcomes many serious obstacles not only in low-range, but even in rear-wheel drive.

Dynamics on-road have changed, as well. With the new engine, overtaking is easier – the Patriot’s old four-cylinder took around 20 seconds to reach 62 miles per hour, but the updated model can do the deed in a far more reasonable 12.7 seconds. And that’s despite weighing in at over 2.1 tons. It’s a very impressive improvement.

The higher compression ratio, though, has forced the engine onto a diet of Premium fuel, although it accepted the 92 octane we found in one of Russia’s most extreme northern points – on the Sredny and Rybachy peninsulas surrounded by the Barents Sea – without complaint during our three days of testing.

For drivers that need to go even further into the countryside, there’s even better news. UAZ is working on a bi-fuel version of the Patriot, with the ZMZ Pro engine from its Profi pickup trucks. The result of such a move would be a Patriot that could travel 50 percent further before refueling than a petrol-only model.

Alongside the new engine, UAZ upgraded the Patriot’s clutch for improved reliability. It’s also lighter and easier to manipulate and cuts down on NVH. A five-speed manual transmission is also a new addition to the modernized Patriot.

Unfortunately, the Patriot doesn’t feature a six-speed box, which is particularly missed on paved roads. But UAZ seems happy with the five-speed. The company acknowledges that the previous Patriot transmission’s throws were too long and the gear lever vibrated too much. To address these issues, the company replaced the solid gear lever with a multi-piece setup that included an integrated damper to reduce vibrations. Throws are also shorter than before, while slotting the lever into the gate is a more satisfying experience.

The big change for the Patriot is the new front axle and steering assembly. Along with the more powerful engine and upgraded transmission, the Profi-sourced axle features a firmer framework on the steering rack and a more powerful damper to isolate the wheel from imperfections in the road. This particular addition can be retrofitted to older Patriots, as well. It’s a worthwhile improvement, since the new elements make for a more controllable, easier to drive vehicle. Now, instead of struggling to keep the car straight, it requires only minor course corrections. And to boot, there’s a tighter turning circle, too.

UAZ also made tweaks to the suspension, softening the rear springs by six percent, while the tweaking the shocks at all four corners, and fitting a thinner 18-millimeter rear sway bar, rather than the old Patriot’s 21-mm setup. The goal was to make a softer, more comfortable ride, but UAZ pulled it off without major increases in body roll. That doesn’t mean the Patriot is perfect. It still suffers from secondary motion on small bumps, and it leans towards oversteer. The Patriot is too loose on slippery roads, and tends to turn in too aggressively under acceleration.

Overall, though, the updated Patriot is more in line with what buyers expect of an SUV.

Overall, though, the updated Patriot is more in line with what buyers expect of an SUV. The 2019 model is more powerful, has additional torque, and both rides and handles better. It’s also more durable, with galvanized door hinges, and thicker, tougher steel that’s more resistant to corrosion. Speaking of rust, a special 3M adhesive coats the seams before they’re primed and painted, keeping oxidation at bay. That paint and primer are new, too. According to UAZ, the Renault-Nissan-Mitsubishi Alliance uses the same stuff.

That doesn’t mean there aren’t serious quality issues that need addressed. Fit and finish is disappointing, and the quality of the plastics in the cabin is poor, too. The seals for the tailgate also need improved. Despite a new sealer for the doors, there’s nothing to keep the cargo compartment isolated, so dirt and moisture get into the trunk while driving.

Should you buy the 2019 Patriot, though? Well, yeah. Especially if you like hunting, fishing, or just escaping the crushing reality of civilized life. You should especially consider the updated Patriot if you passed on the previous version – the current SUV is the best in many years. Will this new model significantly improve sales, though? That’s harder to say, but it’s unlikely the Patriot will be drowning in customers that are suddenly wishing to exchange their Korean or Chinese SUVs for domestic examples.

An increase in sales will more likely come thanks to increased export sales. In recent months, UAZ has announced the opening of dealers in Lebanon and Mexico, and its line of off-roaders is also hitting the market in Kazakhstan. UAZ’s pickup and its Patriot SUV were also certified for sale in Italy. Russian SUVs have long been known and appreciated for their abilities – need we remind you of the Lada Niva? – and there’s little doubt that the Patriot, with its competitive price, will find a similar place in the hearts of foreign drivers.