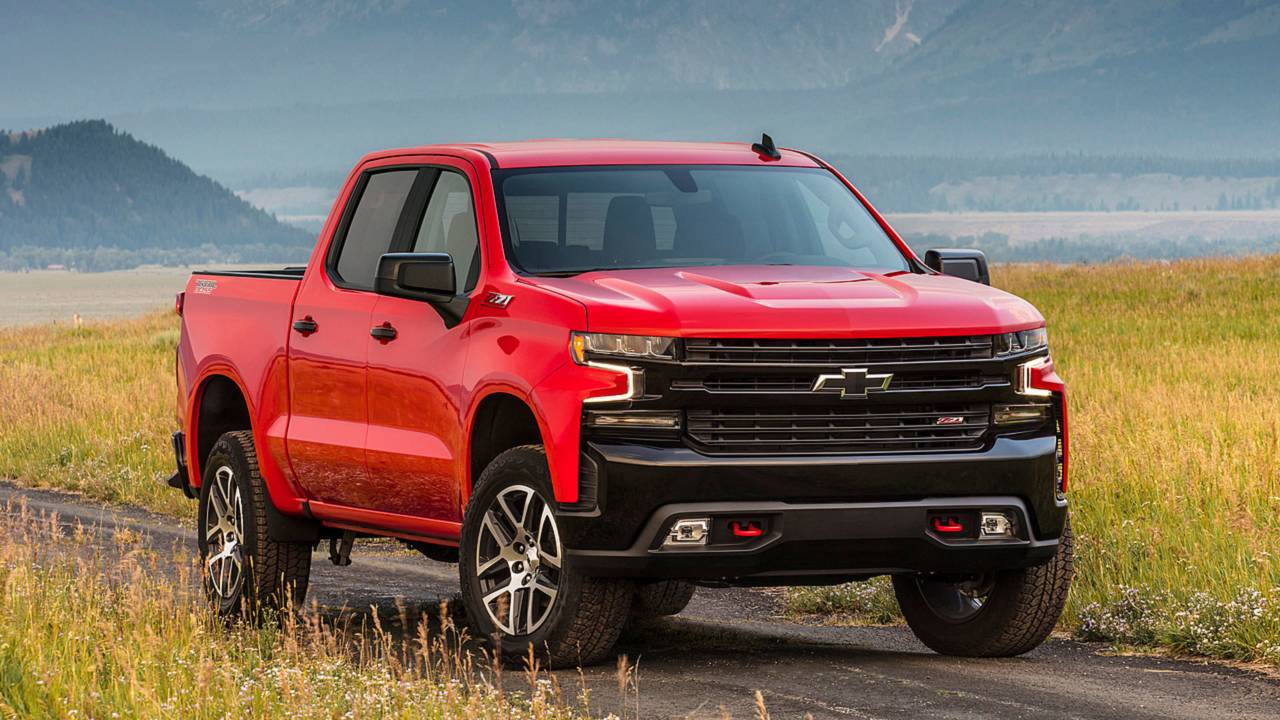 Chevrolet goes out on a limb with latest truck.

The past several years have spoiled pickup truck customers, as Ford and Ram have driven the evolution of the breed. Turbocharged engines, air suspensions, aluminum bodies, and the advance of diesel power have made these trucks more capable, lighter in weight, extra fuel efficient, as smart as supercomputers, and as comfortable as swinging hammocks. These trucks took risks, but as their sales numbers have shown, risk pays off in the truck market.

But while Ford and Ram were making huge leaps forward in the art of truck building, Chevrolet has spent the last decade taking small, purposeful steps that resulted in competent trucks that maintained the status quo. The 2019 Chevrolet Silverado, though, is worth getting excited about.

Chevy hasn't abandoned its conservative approach to truck development, but for the first time in a long time, the Silverado has received some progressive changes that put it on equal footing with the pickups from Dearborn and Auburn Hills, whether you use your truck for work, play, or simply getting the kids to school.

Chevy's newly progressive approach is most evident under the hood. The headliner is the new turbodiesel 3.0-liter six-cylinder engine, which will challenge similar engines from Ram and Ford. A new turbocharged 2.7-liter four-cylinder will also arrive as standard equipment for the Silverado's lower-priced, higher-volume trims. Neither of these engines – or the base 4.3-liter V6 – were on hand for our testing though.

Instead, I spent a day with what’s likely to be the two most popular engines for the redesigned Silverado – a 5.3-liter V8 and a 6.2-liter V8.

While these engines seem like old-school lumps of iron, that's far from the case. Both feature the truckmaker’s new Dynamic Fuel Management system. Active Fuel Management, the system currently offered on the brand’s V8-powered SUVs and trucks, can switch between four- and eight-cylinder modes automatically, helping drivers save fuel.

There are 17 different settings, so V8-powered 2019 Silverado can run on two cylinders. Or one. Or Six. Or whatever the computers think it needs.

Dynamic Fuel Management expands that two-mode drive experience into 17 different settings, so rather than just running on four or all eight cylinders, the V8 in the 2019 Silverado can run on two cylinders. Or one. Or Six. It's really up to the clever computers under the hood, but the results were invisible. I couldn't feel, or for that matter hear, the effect of the 16 hydraulic valve lifters, which serve as the mechanism for the system, working. In every way, the 5.3-liter I sampled first felt like any other V8.

There's 355 horsepower and 383 pound-feet of torque from this engine, and even though our drive route saw me cruising at around 7,000 feet above sea level on some occasions, the power felt like plenty. The 5.3-liter was smooth and predictable, and its partner, an eight-speed automatic, was quick on downshifts and upshifts. Sudden dips into the responsive throttle didn't confuse the eight-speed box, which promptly served up a lower gear. This is a very pleasant V8 powertrain, and at first glance, an efficient one too.

Despite the altitude and our heavy right foot, I saw an indicated 21.7 miles per gallon combined during our drive route. That's far from scientific, and the route itself wasn't long enough to draw a conclusive verdict on fuel economy, but it's a promising stat considering the most efficient last-gen Silverado with a 5.3-liter returned just 23 mpg on the highway.

Even more impressive was the 6.2-liter V8. The tower's special, this big engine still packs Chevy’s clever cylinder deactivation, along with 420 horsepower and 460 pound-feet of torque. This truck pulls hard and has the right soundtrack for the action. And its 10-speed automatic – yet another of the gearboxes co-developed by Ford and General Motors – is a charmer. It's more composed, and less likely to leap between gears unnecessarily than in a competitive F-150. In other words, it's just better at staying out of the way.

With a 6,000-pound trailer strapped to the back, I had no issue getting up to speed with the 6.2-liter engine.

With a 6,000-pound trailer strapped to the back, I had no issue getting up to speed with the 6.2-liter engine. The tow-haul mode – now positioned on a knob on the dash to the left of the column-mounted gear lever – smartly held its gear as I climbed up the hilly roads clinging to the side of the Palisades Reservoir.

The Silverado can easily tow 6,000 pounds, but if you plan on doubling that number, the results may disappoint. In the ever-expanding race between automakers to outdo the competition, we've grown accustomed to the newest vehicle from one brand being superior in a way that's essential to the vehicle type in question. Sports cars get faster, SUVs get roomier and have more cupholders (I'm looking at you, Subaru), and pickup trucks are able to tow more.

The Silverado can't. In its most potent form, it can tow 12,200 pounds. Ram can manage 12,750 pounds with the Quad Cab body and the 5.7-liter mild hybrid, while Ford remains king of towing stuff up a hill with a 13,000-pound rating in its four-wheel-drive Super Crew with the 3.5-liter, twin-turbo V6.

To be frank, this is silly penis measuring. The difference between 12,200 pounds and 13,000 pounds is inconsequential to all but the most ardent truck owners, the type that use their vehicles to tow weekly or daily and push them to the max. But here's the thing, truck owners – particularly the folks I just described – are fiercely brand loyal. An 800-pound difference in max trailering capacity won't matter to them because they've already made up their mind about what they're going to buy. Chevy loyalists would rather eat dirt than drive a Ford, and as soon as they're done with their dusty feast, they'll march down and buy a Silverado or two.

What should matter to you, dear reader, is what Chevy has done to compensate for this negligible shortcoming. The Silverado can't tow as much, but it's much smarter about hauling.

The Silverado can't tow as much, but it's much smarter about hauling.

The new Advanced Trailering Package and Trailering Camera Package are revelations if, like your author, you're a bit of a novice when it comes to towing. The former adds an entire section to the responsive and attractive eight-inch touchscreen infotainment system that can do everything from walk you through proper hitching procedures to conducting one-man taillight testing. So if you don't have a buddy on hand to make sure your trailer's brake lights, taillights, and turn signals are working, the system will run through a test repeatedly, allowing you to hop out and make sure all is well.

The reminder system is nifty, too. Aside from walking owners through the steps to hitch a trailer, it can also record custom reminders. If, for example, you're planning on taking your boat to the lake for some angling, you can program a reminder to grab your rod and reel for right after you've hooked up the boat, and it'll stay attached to the profile for that specific trailer.

The Trailering Camera Package takes things even further. The first package already comes with a hitch-guidance system via the standard rear-view camera, but TCP takes things further, adding a dedicated hitch-view camera, as well as side cameras under the mirrors. There's also an additional port, allowing towers to hook up an accessory camera purchased from their local dealership and attach it to the back of the trailer to make up for the otherwise employed rear-view camera. It's all very neat stuff.

And that's in addition to the smarter cargo solutions. As the company will be quick to tell you, the new Silverado has the biggest bed on the market. It's still steel – so even though there are aluminum bits (the doors, hood, and tailgate), don't plan on those obnoxious Ford-baiting bed commercials to go away – but engineers used stronger stuff and pushed the walls outward, yielding ten more cubic feet of space with the short and standard-box, and 14 more cubes with the long bed. There's also a power tailgate, but can you imagine the ribbing from the guys down at the quarry if you showed up with that?

There's also a power tailgate, but can you imagine the ribbing from the guys down at the quarry if you showed up with that?

Leaving the bed empty won't result in a ride-quality penalty, though. The Silverado still uses a solid rear axle (with a new front independent suspension), but engineers have dutifully quelled its bad manners. On the relatively smooth roads around Jackson Hole and across the border in Idaho, the ride was remarkably calm and composed. One engineer I talked to said he believed Chevy's new truck rode better than the air-suspended Ram 1500 (long the most comfortable truck in the class). I'd need a back-to-back drive to choose the best, but at the very least it's safe to say the Silverado isn't far behind Ram.

That's only half the story of road manners. The Silverado is also remarkably quiet. I spent the first half of the day in the LT Trail Boss, the vehicle that by all accounts should be the noisiest and most uncomfortable of the breed, thanks to its two-inch lift and knobby rubber. But it felt nearly as good as the range-topping High Country I drove later in the day. The mud-focused tires don't buzz or create unpleasant vibrations, and wind noise is remarkably well-controlled, too. And those good ride manners I just mentioned? I observed them while driving the Trail Boss.

The Silverado is also remarkably quiet.

Styling is a notoriously subjective business, but for the record, I don't mind the Silverado's new look (that's very different than actively liking it, I should note).

The Silverado doesn't photograph well, but Chevy's design team has done a fine job of advancing its truck into something that looks like it belongs in 2018 without abandoning traditional design cues. It's better looking than the borderline-retro design of the last-gen trucks.

That said, the proportions are not quite right (notice the how few profile shots there are in the gallery?). Chevy slashed the front overhang for a better approach angle and an easier parking experience. But the move makes for wonky proportions, with very little body ahead of the front axle and a rather large amount behind the rear axle.

The cabin is an impressive place, but Chevy’s conservatism returns here. Aside from some nicer materials, there's not a lot to distance the High Country from lesser models. Hop in a range-topping rival, like the F-150 Platinum or Ram 1500 Laramie Longhorn, and interesting touches and material choices abound. Now yes, a lot of the detailing in those trucks is over the top, but as a rule, aren't American trucks supposed to be over the top?

Aside from some nicer materials, there's not a lot to distance the High Country from lesser models.

Functionally, though, the cabin is a fine place. The infotainment system is excellent, quick to respond, and nice to look at. The seating position for the driver is fantastic, and there's a huge range of adjustability on the seats, making for plenty of room. Ditto with the back seats – there are huge amounts of leg room in the Crew Cab. Chevy stretched the most passenger-friendly Silverado's cabin three inches, granting backseat passengers a limo-like 43.8 inches of legroom. That's more than the biggest F-150. Heck, it's 3.8 inches more than the stretched Mercedes-Maybach S650. Only the mammoth Ram 1500 Crew Cab has more second-row leg room, at nearly 46 inches.

It feels like GM has finally realized the value of risk, that playing it safe with its most important product will only take it so far. The 2019 Silverado's newfound drivability and intelligence complement its capability as a pickup truck. But whether customers will flock to its polarizing styling or its new, advanced engines remains an open question. Chevrolet has taken the risk. Now it waits for the reward. 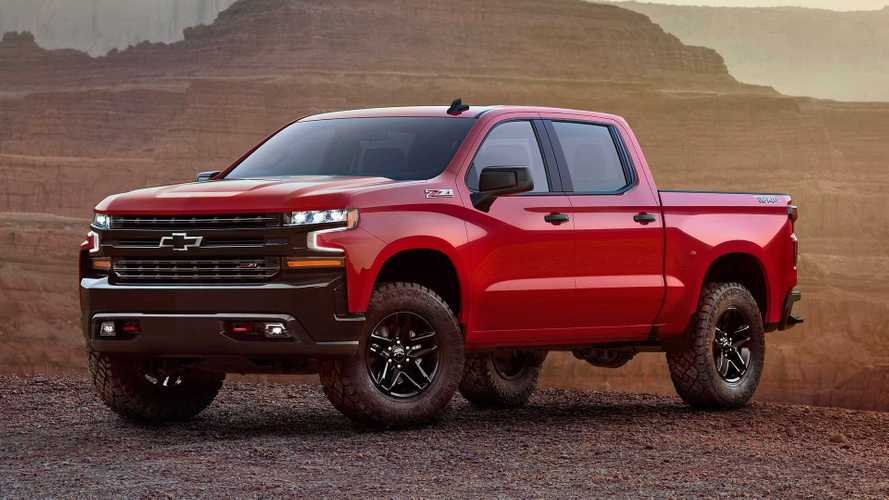