Second time’s the charm as Subaru’s latest three-row effort makes you completely forget (again) about its first one.

Aliens. So many aliens. Whether in the form of cute plush dolls, coy inflatables, dining room-ready paintings, or life-sized metal art, the radioactive green color could not be avoided during my afternoon stroll along downtown McMinnville’s main street. The aliens themselves would appear later, I’m told by the locals.

As an X-Files fan (no comment on seasons 10-11), the annual UFO Festival that lands in this sleepy town surrounded by nut farms and vineyards brings all the nerds to the yard. Receiving an event flier brought me so much geeky delight that I bought the official eyewear: alien eye-shaped sunglasses. In radioactive green, of course.

Get high on more Ascent articles:

But I must confess I’m not here in rando-town Oregon for extraterrestrials. I’m here to test drive the 2019 Subaru Ascent. Though, perhaps to some, its mere existence is a bit otherworldly. After all, the Japanese automaker is known for promoting all-wheel-drive sedans, wagons, and compact crossovers. But a behemoth with a dedicated third row? Weird.

Unless you remember the (B9) Tribeca. Which was definitely weirder. And a failure.

Not one to tiptoe around the elephant in the room, Subaru’s executive team admitted that there were many lessons learned from the Tribeca, which, in its single-generation production run that somehow lasted a decade, less than 77,000 were sold in the United States. Total. Ever. For comparison's sake, the brand sold 177,563 Foresters last year alone. Ouch.

In any case, if the takeaway of Tribeca’s cautionary tale was, “don’t do that again,” then give the all-new Ascent an automatic passing grade. Because it is absolutely nothing like the Tribeca other than the Subaru badge it wears. 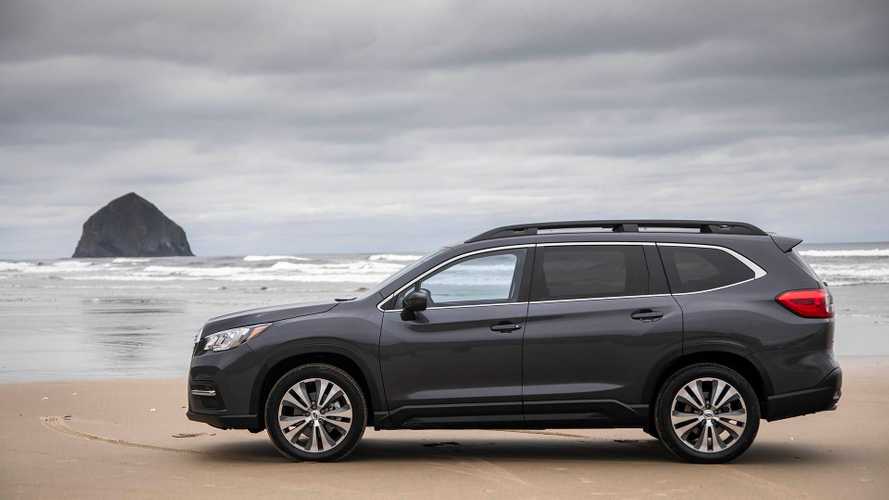 Researched and designed with the American market in mind, the Ascent is unsurprisingly the largest Subaru ever built. And if that’s not enough, its other claim to fame is 19 cupholders. Nineteen! If all eight seats are utilized, that’s 2.4 per occupant. Or 2.7 each for a set of seven. That is an exorbitant number of drinks as it is bathroom breaks.

But to Subaru’s point, the Ascent is a family vehicle so “cupholder” is really another term for “storage bin.” Because let’s face it, not only are cupholder-friendly-sized snack packs readily available, but you also gotta put your sunglasses, phone, rock collection, tinfoil hats, or whatever someplace.

Subaru lovers and new-to-brand looky-loos will have minimal complaints.

Another Subaru first: an all-new engine. Based on the WRX’s turbocharged 2.0-liter Boxer engine, the Ascent utilizes a larger turbocharged 2.4-liter version. Horsepower is rated at 260 and torque at 277 pound-feet. This places the Subie in the sweet spot amongst competitors, even those with V6 engines, and produces more torque than all but the Ford Explorer and Mazda CX-9. Even better, no need to upgrade to 91 octane fuel for more hp (like the Mazda) as regular ol’ 87 will do just fine.

The engine offers a teeny bit of whine upon initial acceleration, but beyond that, the 2.4L emits a rather pleasant note. An eight-speed-emulating CVT is the only transmission option and doesn’t provide the smoothest “shifts” when coming of the line with haste, but no one in their right mind would regularly track this thing. And its 0-60 mph time is 7.4 seconds, which is quicker than V6-equipped counterparts. So, for everyday driving and road tripping, Subaru lovers and new-to-brand looky-loos will have minimal complaints. 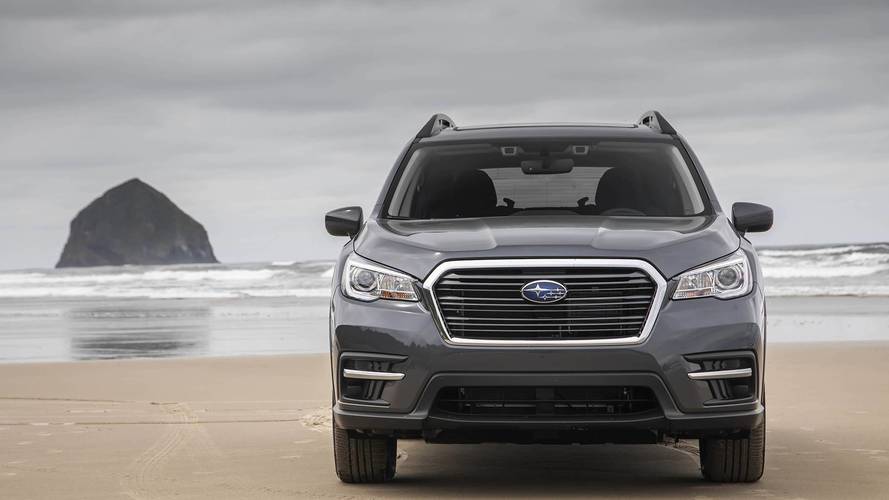 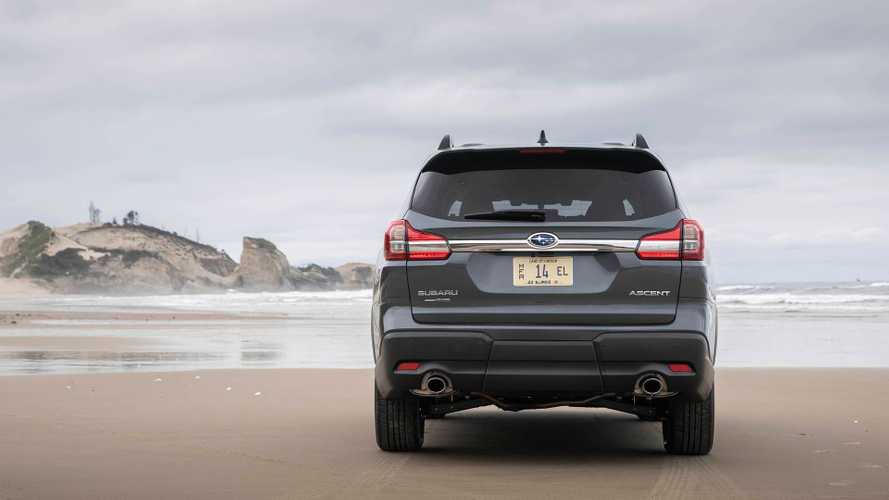 Also, there isn’t much to fuss about how the Ascent handles. We drove Premium and Limited models, both of which weighed roughly 4,600 pounds, yet neither felt heavy or unwieldy. Active torque vectoring is standard and along our northwestern Oregon drive route through hills and dales and beaches, the Ascent never wavered, maintaining a steady and stable ride regardless of the road surface. How Subaru of it.

And I’m not joking about the beach. Our midday break required us to hop on the clay-like but compact sand and drive about a mile down the coast to a tent setup complete with catered lunch and frisbee games. The Ascent had no trouble maneuvering the already heavily traveled sand.

I drove toward the shoreline campsite without using X-Mode, which keeps the transmission in lower gears while adjusting torque and increasing traction control, and didn’t feel a tinge of uncertainty that the vehicle couldn’t make it without further assistance. My co-driver utilized the system on the way back and stated she actually preferred the sandy drive without it.

What else are Ascent owners going to do with their traveling group and gear? Probably tow something. All models are tow-hitch ready and feature trailer stability assist as standard. But keep in mind that the base Ascent is tow-rated at 2,000 lbs., while all other models can pull 5,000 lbs. Still, that figure matches the high end of the scale, beating or matching segment rivals other than the Nissan Pathfinder (6,000 lbs.). 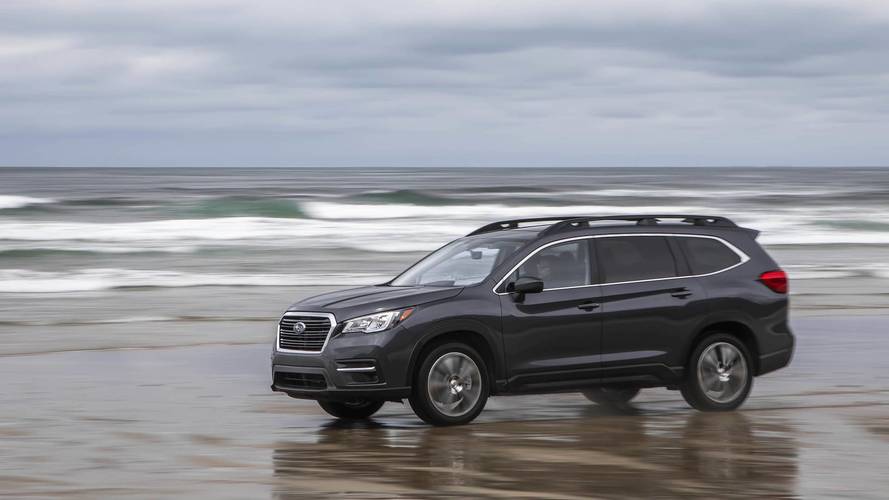 Nevertheless, the vehicle’s handling is just as easy. With an Airstream weighing more than 4,000 lbs. attached, we did a short road course that included a slalom as well as braking, turning, and acceleration exercises. Easy peasy, really. It was as if the Airstream wasn’t even there. Granted, with a fully-loaded Ascent towing 5,000 pounds, zero to 60 will take almost twice as long at about 14 seconds.

But even if you’re not towing anything, the Ascent is plenty roomy for people and possessions. The second-row seats have a fore-and-aft travel distance of more than a foot. Not only does this allow for easy ingress and egress but further flexibility with passenger comfort. With my five-foot-two frame seated in the third row and a six-foot-two colleague relaxed in the second-row bucket seat, there was nary an argument over who had more space. I’m not going to recommend six-footers fill up every seat in the vehicle, but for a multigenerational household or spacecraft full of friends, the Ascent will accommodate groups of many sizes.

In terms of cargo, Ascent’s 17.8 cubic-feet behind the third row easily bests the majority of the competitors, falling behind only to the Explorer and Atlas at 21.0 cu.-ft. and 20.6 cu.-ft., respectively. With the third row down, capacity increases to 47.5 cu.-ft. with a maximum of 86.5 cu.-ft. with all rows folded. And that’s better than everything but the crazy cavernous Atlas, which boasts a massive 96.8 cu.-ft. But no matter, as I think the Ascent is more stylish than the Atlas and offers better dynamics. 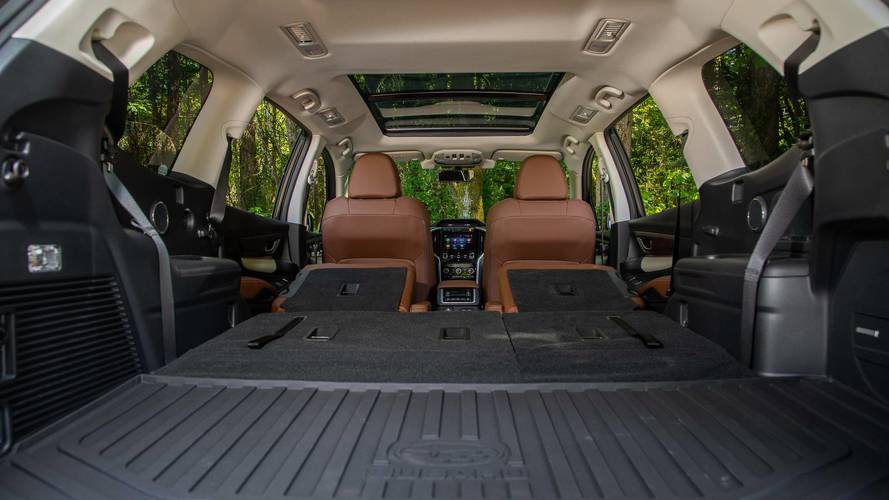 Starting at $32,970 (including $975 destination), the Subaru Ascent will be available in base, Limited, Premium, and Touring trims. The base model is an 8-passenger configuration only, but all other trim levels are available with second-row bucket seats or a bench setup without an MSRP penalty. Meaning, however you want to play 19-drink musical chairs, the price remains unchanged.

The Ascent is more stylish than the Atlas and offers better dynamics.

Also standard is Active Vehicle Hold, which allows the driver to keep the vehicle in a stopped position without their foot on the brake pedal, and a Subaru-first convex cabin-view mirror, which is hardly new technology but no Subaru before the Ascent actually required the baby-minder mirror. 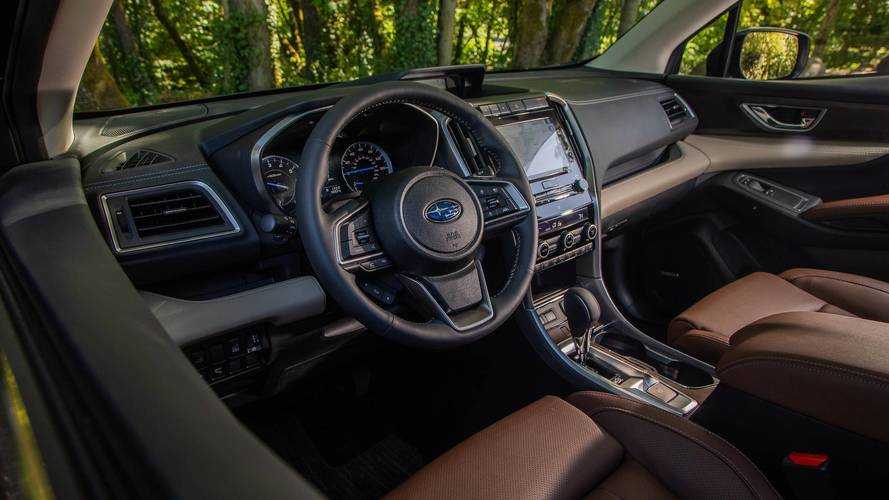 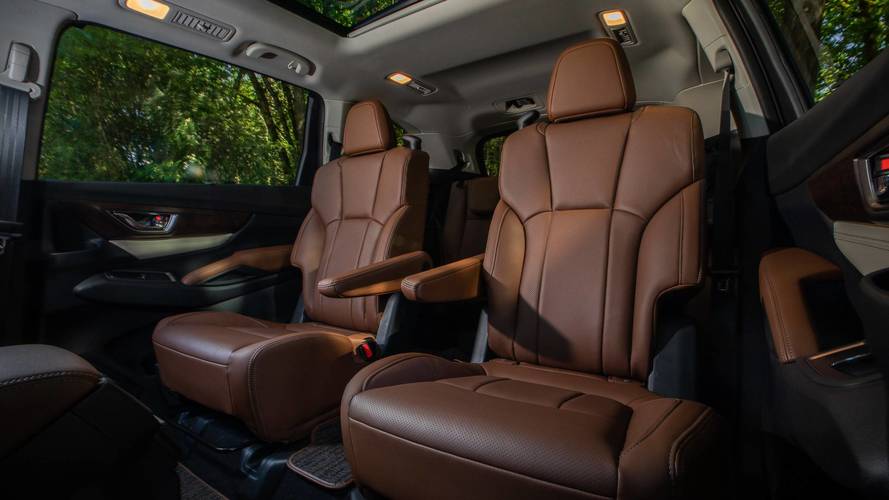 The latter is exactly like General Motors’ rear camera mirror but better. Just like the GM vehicles, if equipped, the standard rearview mirror can be toggled to display a wide-angle rear camera image. Not that it’s meant for extended use, but the Subaru version offers a clarity that is crisper, which leads to less vision fatigue and eye strain. Add this to the already really good all-around visibility from the driver’s seat.

Built in its Lafayette, Indiana plant, the Ascent will descend onto Subaru dealer lots this summer. And there’s very little fault to find with it, especially at such a competitive, heart-of-the-market price point. Current fans of the automaker will be even more brand rabid knowing they’ll now have a bigger-than-ever Subie option. And although the 2019 Subaru Ascent isn’t an out-of-this-world vehicle that will immediately take over the three-row crossover sector, the segment’s leaders shouldn’t dismiss it and neither should consumers. Because from what I hear, little green men (or greys) have a way of sneaking up on you.