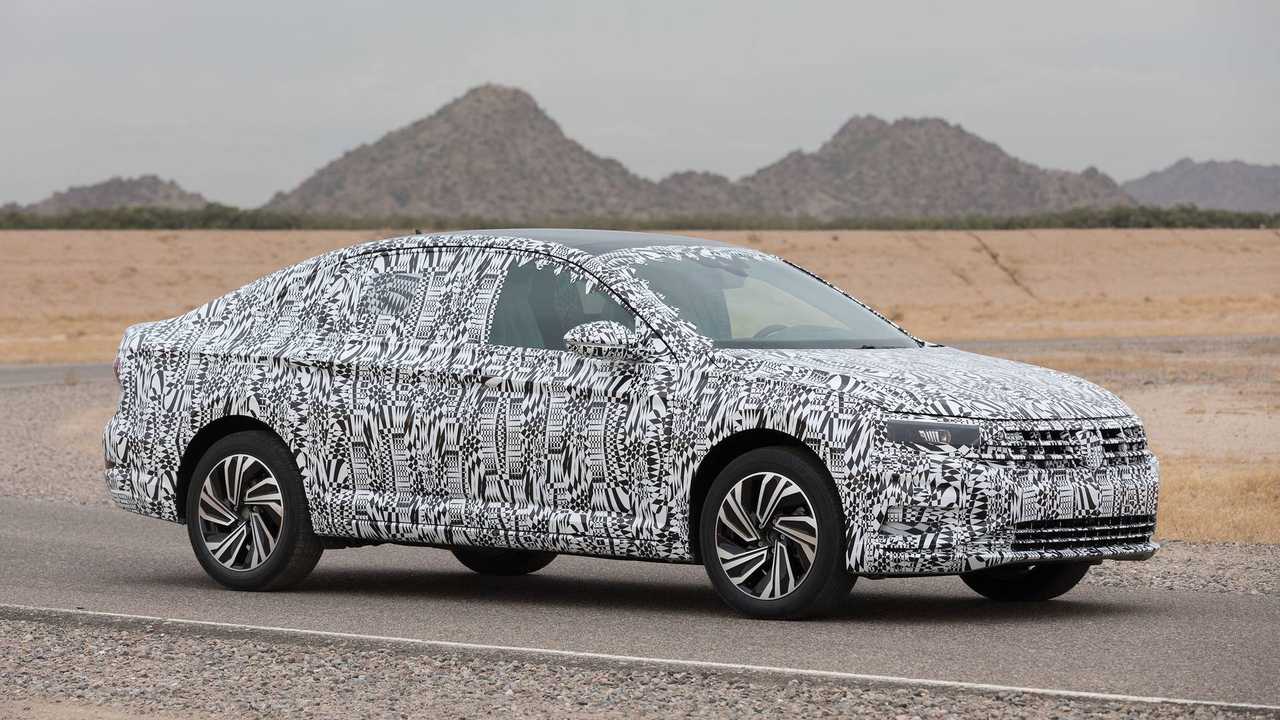 VW’s new MQB platform proves to be more of a good thing.

It won’t be until January that we see the all-new Volkswagen Jetta in the metal. The small sedan is scheduled for a big debut at the Detroit Auto Show, ditching its current PQ35 platform in place of the new modular MQB, and gaining a more powerful engine and a more responsive gearbox in the process. In preparation, VW opted to give me a sneak peak of the new Jetta – under camouflage, of course – at its 1,600-acre Arizona proving grounds, just about an hour south of Phoenix.

The facility is one of eight manufacturing, design, and production locations VW has in the U.S., and employs nearly 200 people. It’s used for testing products from all parts of the VW Group family, everything from Ducati to Bugatti. Wading through a sea of Seats, Skodas, and Chinese-market VWs, I climbed behind the wheel of a heavily camouflaged Jetta prototype and set off.

Customers should be pleasantly surprised by its upscale driving feel, drawing similarities to both the Golf and Audi A3.

Some components from the outgoing model do carry over, particularly the base 1.4-liter turbocharged engine. But paired with a new eight-speed automatic, and riding atop VW’s scalable MQB architecture, the new Jetta feels poised and comfortable, at least upon initial impression.

Customers should be pleasantly surprised by its upscale driving feel, drawing similarities to both the Golf and Audi A3. The steering is light and sharp, the suspension is responsive, and the cabin is quiet. Even in the toughest driving conditions, the front-wheel-drive Jetta never falters from those three key qualities. And I do mean tough conditions.

The high-speed oval at VW’s Arizona proving grounds pushed the small sedan to its limits, and at 127 miles per hour the Jetta kept its composure admirably. The steering wheel communicated effortlessly with the driver as to what the front wheels were doing, never once feeling lifeless. Those same engineering qualities carried over to the slalom course, where the Jetta remained balanced and direct while I pushed it to its limits around cones on soaking-wet pavement.

When I note that the new steering setup could be just a smidgen heavier, Matthias Erb, Chief Engineering Officer for VW North America, grins and suggests, “wait until you drive the new GLI.” Sounds promising.

The new suspension setup keeps the Jetta planted, allowing the front wheels to pull the car seamlessly around corners with barely any body roll.

In the corners, the sedan is even more impressive. On VW’s twisty, technical track, the new suspension setup keeps the Jetta planted, allowing the front wheels to pull the car seamlessly around corners with barely any body roll. Those sporty driving characteristics draw similarities to cars like the Mazda3.

Under the hood, the updated engine gives you power when you need it, and feels surprisingly quick. VW didn’t give me a horsepower figure given that it’s just a prototype, but suggested that it will see a bump from the current 1.4T’s 150-hp output. The gearbox is mostly solid with quick shifts, and only when you mash your foot down in the straights does the eight-speed transmission hesitate to downshift, if only for a second.

Cycling through the range of different driving modes – Normal, Eco, Sport, and a customizable fourth driving mode – made distinct changes to the Jetta. The vehicle transforms from an efficient four-door to a sporty-enough sedan with the Sport option ticked. The steering is slightly heavier, and the transmission holds lower gears for longer. It’s not just some lukewarm option, either, the different modes make a serious dent in driving dynamics.

The new MQB platform works wonders on the overall dynamics, giving the Jetta a more premium driving feel in a segment that continually skews more upscale.

While most of the exterior was covered in camouflage, many of the body lines borrowed obvious cues from both the VW Arteon and Audi A3. The former in particular made itself known in the grille. The cabin, meanwhile, saw the same undercover treatment, but comfortable new leather seats, better driving visibility, and a more spacious back seat were among the highlights. Overall the styling and finish of the Jetta, both inside and out, felt like much more of a good thing.

The seventh-generation Jetta was one of four VW vehicles designed specifically for North American drivers, alongside the Passat, the Tiguan, and the Atlas. That means the success of the new sedan in the U.S. could theoretically make or break the Jetta nameplate going forward. So far the company has sold more than 16 million examples of the Jetta worldwide since 1979, and if the new model is any indication, that number could jump significantly in the next few years.

After a few hours behind the wheel, the Jetta made a positive impact. The new MQB platform works wonders on the overall dynamics, giving the Jetta a more premium driving feel in a segment that continually skews more upscale. Provided that the styling and equipment is up to par with the competition, and that the price tag doesn’t move much – VW promises that it won’t – leaders like the Honda Civic and Mazda3 should have their work cut out for them when the new Jetta goes on sale.