2018 Mitsubishi Outlander PHEV First Drive: Head Of The Class (Of One) 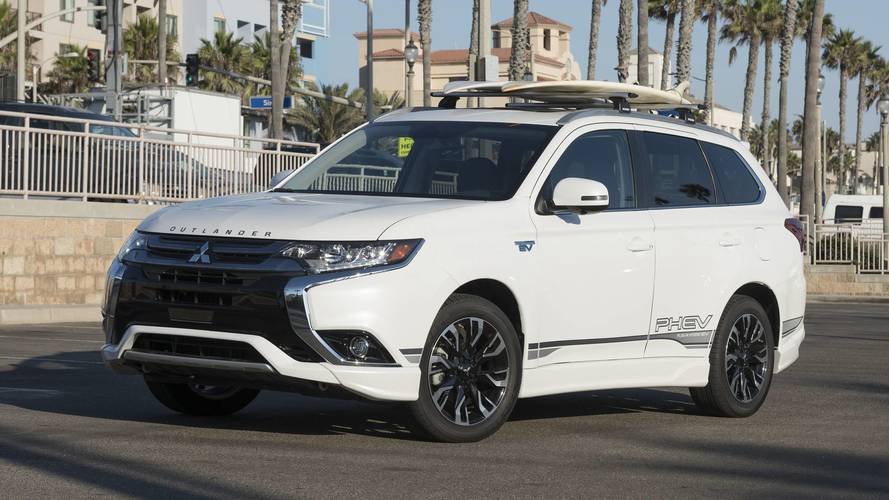 There is a small audience for Mitsubishi vehicles in the U.S. While sales have been increasing – the company has experienced 75 percent growth since 2012 – Mitsubishi is still small potatoes in these parts. The company's rebound helped it sell more than 100,000 vehicles in 2016, the first time it had done so since 2007, but remember, Ford sells well over twice that many vehicles each month (many more profitable than the low-cost Mirage).

But Mitsubishi knows what side its sales bread is buttered on: crossovers. The recent resurgence is due to the success of the company's two CUVs, with sales volume for those models up 123 percent in the last year. The Outlander Sport was up 66 percent, while the Outlander was up 250 percent. It must have pained Mitsubishi North America representatives something awful when the automotive press kept bugging them these about the status of its plug-in-hybrid Outlander. We saw earlier versions of the Outlander PHEV do so incredibly well in Europe and Japan, and yet there was no sign of it here – despite repeated promises from Mitsu bosses. “It's coming, it's coming,” they said, but they kept us waiting. Now that it’s finally here (well, once deliveries actually start in January 2018), it's high time to see if Americans will be as enthusiastic about this affordable plug-in CUV as our friends across the oceans.

The Mitsubishi does better than any other plug-in hybrid CUV or SUV in the U.S. when it comes to all-electric range.

In case you haven't priced out a plug-in hybrid utility vehicle recently, the closest you can come in price is the BMW X5 xDrive40e, which starts at $63,200. Of course, you get a lot more luxury with the Bimmer, and you get to drive a BMW and all that entails, but for the size and all-electric capability with a gas engine backup, the Outlander holds its own.

In fact, the Mitsubishi does better than any other plug-in hybrid CUV or SUV in the U.S. when it comes to all-electric range. While the company isn't giving out exact, EPA-approved range numbers just yet (expect those some time in November), representatives at the vehicle launch in Catalina, California last week said that they are "very confident we will exceed all our competitors," which we guess means around 20 miles of range, give or take. That means it’ll beat all of the other large PHEVs, which have a maximum EV range of 14 or 15 miles. You will not be able to say that $60,000 or $70,000 gets you the best CUV EV range.

Since the Outlander PHEV has driver-selectable regenerative braking levels, we learned that the strongest setting made the dusty drive relatively easy.

There’s another unique benefit hiding in the Outlander PHEV. It is the only PHEV with a DC fast charger. If you plug into a CHAdeMO outlet, you'll be able to fill the battery up to 80 percent full in about 25 minutes. Compare that with around four hours for a full charge using Level 2, and eight hours from a standard 120-volt outlet.

The Outlander has other, more expected features of a CUV in today's market. The brand's four-wheel-drive system, called S-AWC, is standard on both trims thanks to two 60-kWh motors (similar to each other, but not exactly the same), one on the front axle and one in back. It can tow up to 1,500 pounds. And there is a 1,140-watt onboard sound system plus two,120-volt outlets in what Mitsubishi representatives called the "ultimate tailgating vehicle" that will let you plug in a TV in the stadium parking lot or a mini-fridge if you're out glamping. While the battery should provide hours of power, the gas engine will come on to power the outlets if needed.

So, on paper, there's a lot to make checking out the Outlander PHEV a worthwhile way to spend your car shopping hours. Spending a few hours on the dirt roads of Catalina showed that the CUV can handle itself in situations beyond shuttling a brood to school and back. Even though the speed limit throughout the island is a meager 25 miles an hour, the hills and tight turns provided more than enough proof that the average driver will get more than enough power and performance out of the Outlander PHEV.

While functional, things feel a bit weak inside. There's no one-touch window button on passenger side, for example, and the moonroof cover is flimsy.

Since the Outlander PHEV has driver-selectable regenerative braking levels, we learned that the strongest setting made the dusty drive relatively easy. Mildly challenging dirt roads aren’t the only place where the Outlander PHEV feels at home, though. On paved surfaces with enough charge in the pack to drive in EV mode, the CUV is surprisingly quiet and calm. Even when the engine kicks on, there are no annoying rattles and shakes.

The Outlander PHEV offers three driving modes: full electric in EV Mode, electric priority with some assistance from the 2.0-liter four-cylinder gasoline engine in series hybrid mode, and then, when the battery is low, a parallel hybrid mode where the engine does most of the work with some help from the motors when needed for extra acceleration. There are three driver selectable battery modes as well. Charge mode will use the gas engine to charge the pack, which Mitsubishi says is useful when climbing grades or towing. Save mode will keep the battery pack at its current level (once it's below 90 percent full, so that there's room in the pack for regenerative braking energy to go), in case you need it for city driving of the aforementioned power output. Lastly, there is an EV priority mode that does its best to keep the vehicle in all-electric mode if possible, unless "maximum power is needed."

The controls for all of these modes, as well as the "Twin Motor 4WD lock" button, are all near the gear shifter. But for some reason the "eco mode" button is located far away by the HVAC and audio controls. This is just one way you can tell that the interior is not where Mitsubishi spent most of its engineering dollars for the Outlander PHEV. While functional, things feel a bit weak inside. There's no one-touch window button on passenger side, for example, and the moonroof cover is flimsy.

Looking at the infotainment screen is like going back in time – literally, in fact, as the the system’s date, and I'm not kidding about this, was set to February 2013. There are too many beeps happening, and every touch is another beep. If you dare touch the “menu” button while in a screen that doesn't have a menu option, it'll just triple beep at you. Then there's the way-too-complicated energy monitor screen. There are two circles with each half telling you something different and in a different way. "EV power" on left side of the left circle is output in kW. The right side of that circle is "instant fuel economy" in mpg. The left side of the right circle is your "regen braking" displayed in kW, while the right side of the right circle is cumulative charge in kWh. It's far too much to take in while driving. But at least the Outlander PHEV has Apple CarPlay and Android Auto.

The Outlander PHEV is a reasonable CUV with an affordable electric powertrain. Sure, the target audience for this vehicle is small (but growing), but the truth is that anyone who actually test drives and/or buys one of these is likely to be wholly satisfied. You get a lot for your money, and it's nice to be able to say that about more and more plug-in vehicles these days.