2018 Audi TT RS First Drive: The Most Thrilling TT Yet

A great all-round package for driving very quickly on everything from winding back roads to serious race tracks.

Thank Facebook that this car is even here. The original Audi TT RS wasn’t going to make it to America, but when a Facebook petition exploded back in 2010 – it garnered more than 11,000 signatures in a month – Audi decided to bring the high-performance model Stateside. All 500 units sold out for the 2012 model year, so for the following year, Audi of America stole 300 TT RS coupes originally intended for Canada. Those sold out, too.

Fast forward to today, and I’m driving an all-new TT RS that’s lighter, more powerful, and faster than that original. Yet it has all the same building blocks that got enthusiasts hot and bothered seven years ago: punchy five-cylinder turbo engine, Quattro all-wheel-drive traction, and in-your-face looks. Will this car be in as high demand as its predecessor?

After a few laps around the 1.5-mile Lime Rock Park circuit, I’m prepared to say the answer is a firm “yes.” The Audi devours straight lines with a manic burble, the type of off-kilter exhaust sound only an inline-five can make, as the engine and dual-clutch gearbox rocket the car forward. It grips hard in high-speed turns and turns in eagerly to the track’s lower-speed bends, quick steering making it all the easier to swap directions in an instant. Pile onto the optional carbon ceramic brakes and there’s a refreshingly firm pedal feel as speed evaporates. 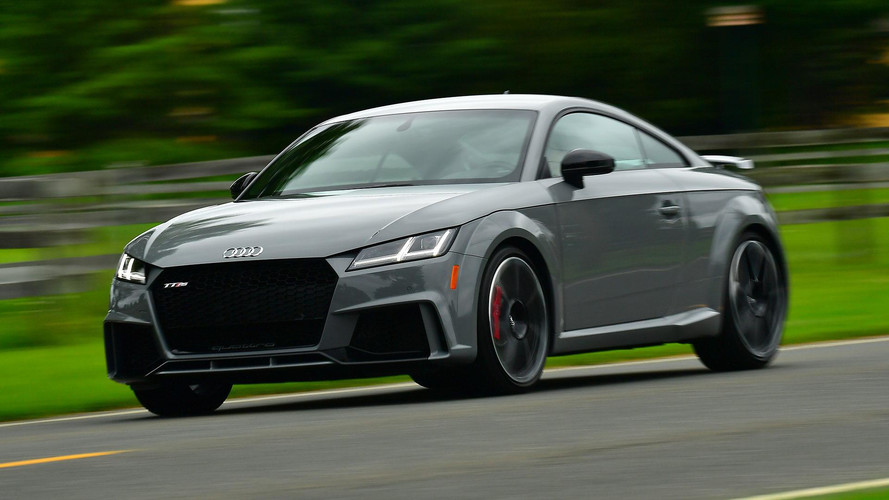 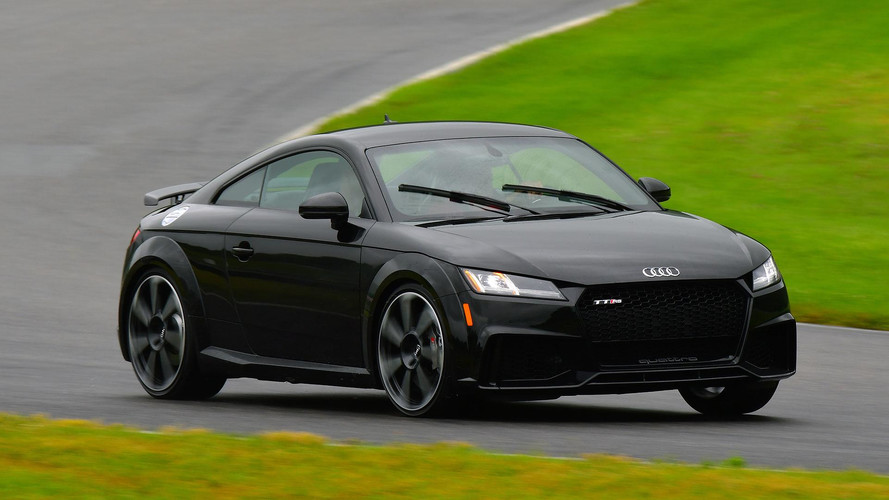 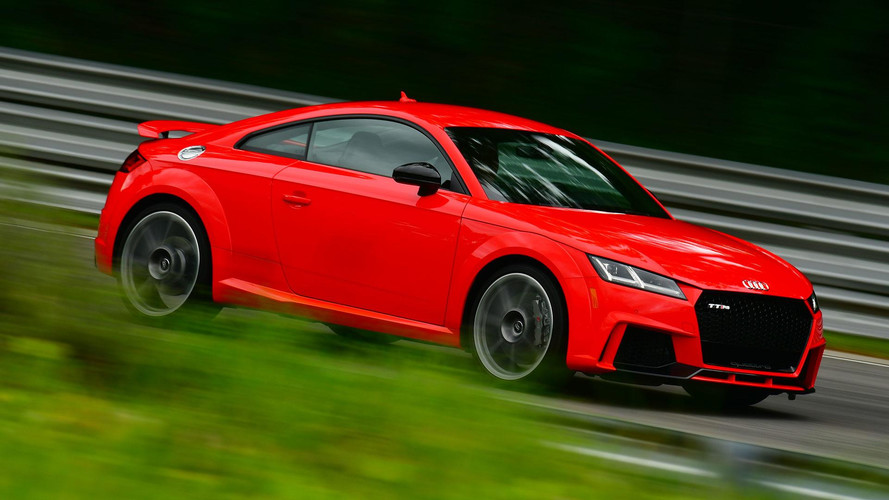 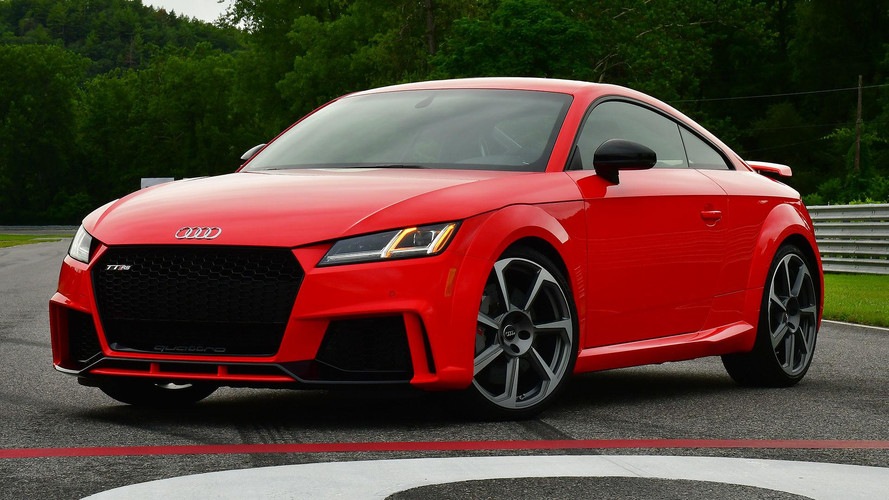 Most of all, though, the TT RS is noticeably forgiving. It’s my first time ever driving at Lime Rock, and it’s far from an easy track to pick up in one sitting. But the Audi has enough compliance and gentleness in its chassis setup to tolerate some less-than-perfect lines and last-minute adjustments. It’ll tighten its line under power coming out of a corner, but there’s never a sense that the TT RS will come around on you and cause any panicked moments.

The cars available on the track are all equipped with the Dynamic Plus package. It swaps the front brake pads and rotors for carbon-ceramic units, adds a carbon-fiber engine cover, installs OLED taillights (the first on any production Audi), raises the top-speed limiter from 155 to 174 miles per hour, and replaces the regular magnetic adaptive suspension with a fixed, RS-specific suspension tune. If you’re going to be a track-day junkie, it’s a must-have for your TT RS.

Under the hood of every TT RS is a turbocharged 2.5-liter inline-five, a revised version of the engine that weighs 57 pounds less than its predecessor. Weight savings come from switching from iron to aluminum construction, as well as from a hollow steel crankshaft and a magnesium oil-pan frame. With 400 horsepower and 354 pound-feet of torque that are sent through a seven-speed dual-clutch transmission, it’s plenty of power for a car that weighs 3,306 pounds.

Stephan Reil, head of technical development for Audi Sport GmbH, says that the somewhat untraditional engine size and shape pay big dividends in terms of drivability and performance. Compared to a 2.0-liter four-cylinder, the Audi’s engine can generate more torque before the turbocharger wakes up, and it produces more exhaust gases to spin up the turbo sooner. It also maintains the 0.5-liter-per-cylinder engine spacing that Audi likes for its performance engines – 2.0-liter four-cylinders, 3.0-liter V6s, 4.0-liter V8s – while being essentially the biggest engine that could fit transversely inside the TT’s engine bay. Besides which, it works well with Audi’s heritage of five-cylinder turbo race and rally cars.

Everything else on the TT has been upgraded for RS duty, too. The Quattro all-wheel-drive system has bigger clutches and a new housing to handle the higher power ratings, the front brakes measure a whopping 14.6 inches and have eight-piston calipers, and Audi magnetic ride suspension is standard. The standard rubber is 245/35R19 summer tires – no all-seasons are offered from the factory on the TT RS.

Revised bodywork helps feed more air into the engine bay, and also provides more downforce than the regular TT and TT S; the rear wing is fixed rather than electrically activated. Up front, too, note a “quattro” logo below the gaping front grille. And doesn’t the car look the business in this Nardo Gray paint with various gloss-black accent pieces?

Side-step the brake and the car leaps off the line with not a hint of tire squeal, hustling toward 60 mph with ease – 3.6 seconds is the company’s quoted time.

Launch control also comes standard, activated simply by setting the car to Dynamic mode and depressing both pedals, and I give it a go on a short acceleration run Audi has graciously provided. With both pedals held, the engine will build and hold 3,500 revs until you release the brake. The engine selectively cuts power to one cylinder at a time to keep the turbo spooled; that also produces a rally-car-sexy burble from the exhausts. Side-step the brake and the car leaps off the line with not a hint of tire squeal, hustling toward 60 mph with ease – 3.6 seconds is the company’s quoted time. That’s only half a second slower than the 562-hp McLaren 570S Spider we just drove – which costs three times as much as the Audi.

That performance is more than evident even on public roads, where the TT RS eagerly scurries toward the speed limits in rural Connecticut. Catch the powertrain off-guard and it’s easy to elicit some lurching and hesitation in low-speed driving, but for the most part the engine responds quickly and urgently to the throttle.

The optional 20-inch wheels ride firmly over all pavement, even with the car set to Comfort mode, which puts the suspension, throttle response, transmission, and steering in their most laid-back settings. Despite its quick turn-in, the steering is remarkably stable in a straight line. That same chassis poise that makes track work fun is equally in effect here as I dart around narrow back roads. 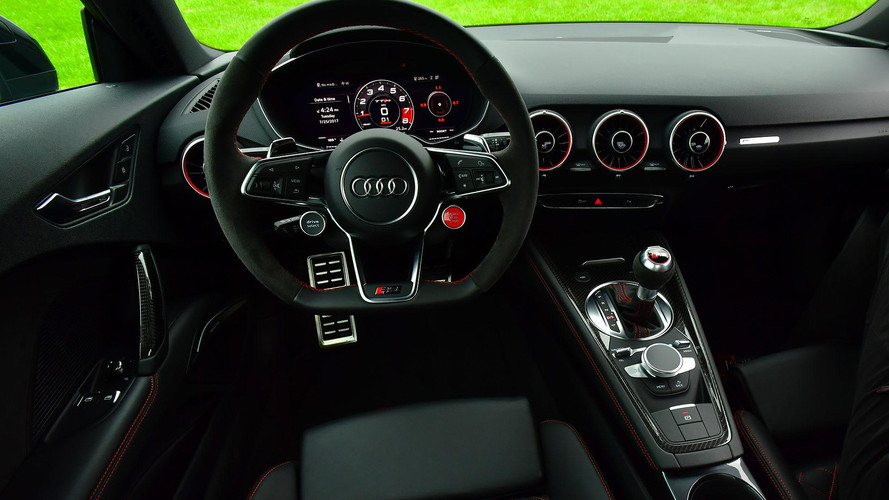 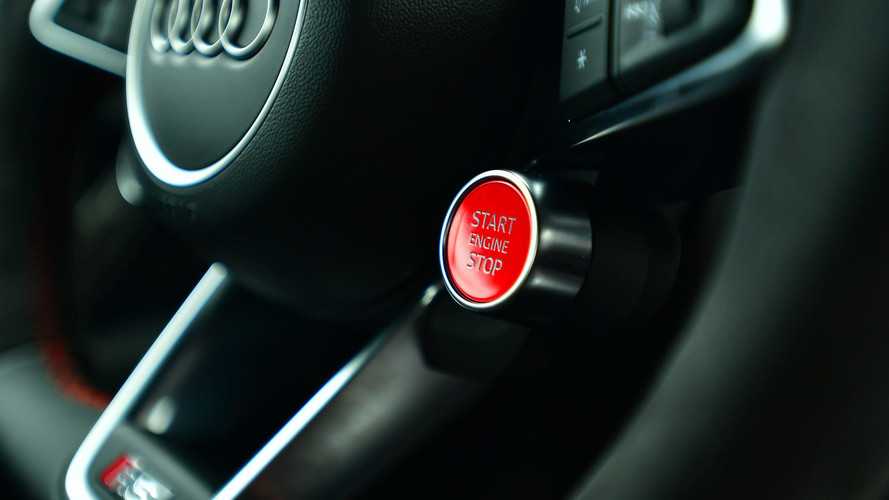 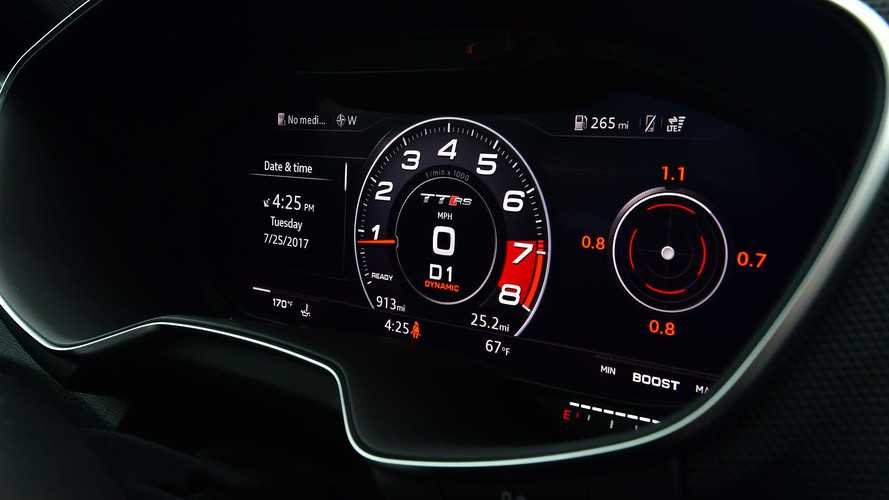 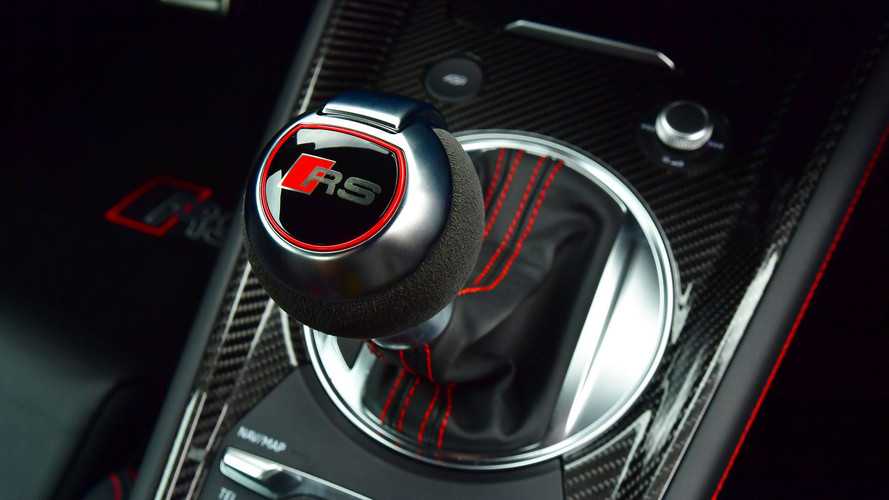 Sitting in power sports seats that are not overly snug, the cabin presents itself squarely for the driver’s enjoyment. Audi’s wonderful Virtual Cockpit digital instrument cluster is front-and-center, behind a flat-bottom steering wheel inspired by the one on the R8. The engine start-top and drive-mode select buttons are mounted to the wheel, with another switch to make the sports exhaust louder or quieter on the center console. Carbon fiber trim, red accent elements, and various TT RS badges further distinguish the cabin. As in any TT, the back seats are mostly for show, though behind them in the hatch there’s a quite generous 12 cubic feet of cargo space.

The 2018 Audi TT RS starts at $64,900 before any options. The add-ons you’ll really want include the $6,000 Dynamic Plus pack; the $3,500 Technology pack that includes MMI navigation and a Bang & Olufsen sound system; and possibly the $1,750 Black Optic pack seen on this car that drenches the car in gloss-black accents and 20-inch wheels. The entry price is a teensy bit cheaper than a Porsche 718 Cayman S, Audi’s proclaimed target with the TT RS. With all-wheel drive and more horsepower, there’s a decent argument to be made for the Audi offering more “value,” though “value” is always a tricky argument with sports cars.

It’s not tricky at all to argue that the 2018 Audi TT RS is superb fun on public roads and more than capable on a track. From its brash design to its plush interior, and from that heroic engine to the planted chassis, the Audi is a gem. Most of all, the TT RS is easy to drive quickly whenever you want. That’s more than enough reason to hit the “Like” button on this car.