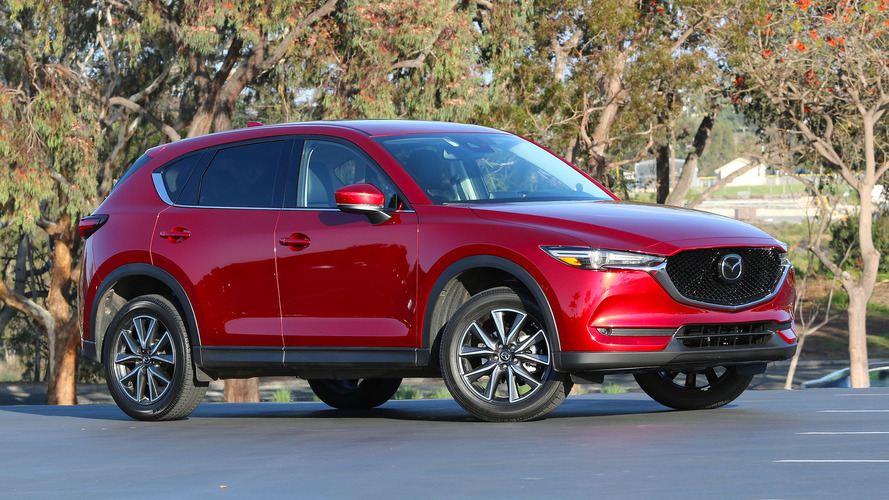 Mazda engineers fix the CX-5’s demerits without affecting any of its strong points.

Mazda had a very tightly focused agenda in redesigning the CX-5, the crossover that now accounts for a quarter of all the company’s sales.

“We wanted to mainly not screw up the steering and handling, we wanted to dramatically improve the NVH [noise, vibration, and harshness], and improve the ride slightly,” said Dave Coleman, Mazda’s manager of vehicle dynamics engineering.

That’s because although the CX-5 was lauded for its engaging driving dynamics and thrifty powertrains, it was loud in the cabin and stiff over bumps. Anytime I recommended the CX-5 to a crossover shopper, it came with caveats about the ride quality and lack of noise insulation. Now, though, the 2017 model addresses those issues, while also building in more style and design. The new CX-5 is finally the crossover you can recommend without any disclaimers.

It’s starts with a new design, which tightens up the CX-5’s lines and build upon its already stylish look. One of the most notable changes is that the hood now sticks out farther above the headlights, echoing the long-nose appearance of the three-row CX-9. The smaller headlights are now home to LED illumination, and LED taillights are optional out back. The CX-5 undoubtedly looks most striking in its Soul Red Crystal launch color (a $595 option), but in any color, it’s a thoroughly attractive entry in the class.

What you can’t see from the outside is how much effort Mazda put into keeping noise out. To meet Coleman’s goal of addressing NVH, the new CX-5 packs extra sound-deadening material almost everywhere. In the cargo area, for instance, exposed plastic pieces are now lined in felt or carpet, the windows are dual-pane, and there are thicker seals all around. The doors now have a third rubber seal (as on the CX-9), the windshield wipers sit lower so as not to cause so much wind noise, there’s a tighter gap between the lower door edge and the body, there’s a new felt-lined underbody tray that better muffles noise, extra insulation material in the C- and D-pillars, and even new damper weights atop the front struts to quell road noise.

It works. On any road surface, the persistent hum and drone that filled the cabin of the last CX-5 is gone. Conversations are easy, and you no longer have to crank the radio to actually hear it over road and wind noises. Without any objective measures to back it up, I’d posit the Mazda is now essentially as subdued inside as anything else in the segment, including the excellent Honda CR-V. The downside to all this extra sound insulation is that the CX-5 gets a bit heavier. Front-wheel-drive models gain 94 pounds while the AWD variants add 66 pounds.

The CX-5 undoubtedly looks most striking in its Soul Red Crystal launch color, but in any color, it’s a thoroughly attractive entry in the class.

The only engine choice, a 2.5-liter inline-four, carries over almost totally unchanged. Torque remains 185 pound-feet, while power inches up from 184 to 187 horsepower. The changes amount to new engine-control software, new asymmetrical oil-control rings, and new pistons that were reshaped to eliminate a hot spot prone to knock, which can cause the engine computer to reduce power. That piston change is an important upgrade for responsiveness on an engine with a 13:1 compression ratio that’s tuned to run on regular 87-octane gas.

As before, there’s a sense that this 2.5-liter engine is “just enough” power for the CX-5 when you accelerate hard. It’s never slow, nor is its acceleration explosive. Exceptionally linear throttle tip-in makes the car a breeze to drive smoothly in the city, and the engine’s deliberate power curve delivers peak torque by 3,250 rpm in front-drive cars and 4,000 rpm in AWD models. The six-speed automatic downshifts frequently – it was specifically reprogrammed this year for more responsive kickdown – and holds on to low gears in turns, all the better to keep the powertrain primed for sprints onto freeways after cloverlane interchanges. The aforementioned sound-deadening efforts tame the engine’s thrashing noticeably, though it’s still coarse as revs climb.

Fuel economy ratings are down on paper for both front- and all-wheel drive models. The former now returns 24 miles per gallon city and 31 highway, versus ratings of 26/33 last year; for the CX-5 AWD, EPA numbers fall less precipitously, from 24/29 to 23/29 mpg. But it’s worth noting that the EPA began using a stricter efficiency test for the 2017 model year, which dragged down numbers. In the real world, the new CX-5 will likely be as efficient or even a little thriftier than before.

Mazda promises it will launch a more efficient turbodiesel engine for the CX-5 later this year, though officials have few details to share thus far.

Ride-and-handling changes were directed mainly at improving comfort, though Coleman says only that the suspension was “softened.” For Mazda, a fun-to-drive character is a unique selling point, so engineers appear to have battled back and forth between comfort and responsiveness. The steering rack is now directly bolted to the front subframe for instance, removing three rubber mounts and thus some vagueness. But that would have introduced unwanted harshness, so Mazda replaced a front control-arm bushing with a liquid-filled unit to quell unpleasant feedback. The front suspension spring perches were redesigned, too, necessitating asymmetric springs that Mazda claims reduce friction.

What’s most notable in driving the CX-5 is that bumps are now absorbed by the suspension rather than your butt.

What’s most notable in driving the CX-5 is that bumps are now absorbed by the suspension rather than your butt. It is comfortable, though perhaps not plush, over all road surfaces. There’s no more crashing over expansion joints or manhole covers. Instead, the Mazda feels like it flattens out the road surface below you, handily soaking up most unpleasant inputs.

All the same, the crossover hasn’t lost the engaging driving demeanor that I loved before. Perhaps there’s a little more roll and pitch, but for the most part the CX-5 turns in sharply, settles quickly through bends, and is unperturbed by mid-corner bumps. The steering is heavier than anything else in the class, with weighting that builds gradually as you dial in more speed and angle. While not exactly talkative, there is at least some feedback through the wheel, unlike most other small CUVs. Push the Sport button for the transmission, find some winding roads, and you’ll have a remarkable amount of fun considering this is a 187-hp crossover.

Whether you’re driving or just along for the ride, you’ll note that Mazda has also revamped the entire inside of the CX-5. It now looks a lot like the CX-9, with new polygonal air vents, smarter climate-control switchgear, front door armrests that are now flat rather than rising at the front of the doors, and new gauges with a 4.7-inch color trip computer. The shifter was repositioned forward by a miniscule amount so it is easier to reach. The optional head-up display now is full-color and projects onto the windshield, rather than on a tiny piece of plastic atop the dash, so it takes less time to refocus your gaze on it. And the Mazda Connect infotainment system moves to a tablet-like spot at the top of the dash.

There are also changes that you won’t notice, but you will appreciate. A new side-view mirror and A-pillar “sail panel” design provides a teensy bit more visibility, helpful for urban driving. THe door handles are now closer to the driver and passenger, making it easier to open the door, Mazda claims. The exterior door handles have been redesigned for easier gripping, and the steering wheel was specifically reshaped to improve long-term comfort as you wrap your fingers around its rim. The windshield wipers are available with an electric heating element for cold mornings. And a new sound-system design allows for smaller door speakers, thus improving door pocket space. The sunroof is even larger, in direct response to buyer feedback.

Cargo space in the back actually falls a little bit on paper, from 34.1 to 30.9 cubic feet with the rear seats up and 65.4 to 59.6 with them lowered. That puts the new CX-5 on the lower end of the class in terms of cargo room, way behind the Honda CR-V (39.2/75.8) and Toyota RAV4 (38.4/73.4). Mazda counters that the primary measurement difference is due to the new model’s lower roofline, cutting floor-to-ceiling height by 2.1 inches, and that real-world storage space will be pretty much the same as before for most owners. But it’s an important consideration of cargo room is a primary buying concern.

It still drives well, but now also rides well, has lots of equipment, and allows occupants to converse without shouting.

In terms of equipment, the optional adaptive cruise control now works down to 0 miles per hour, versus 18 mph before; heated rear seats and rear USB ports are newly available; the windshield-mounted camera module is now smaller and can read traffic signs; there’s now a heated steering wheel; the rear seat reclines; and there’s an available power liftgate for the first time. Mazda says buyers specifically asked for a power liftgate, which is available on pretty much all the CX-5’s rivals. There are still a few options available on rival crossovers you can’t find here, like cooled seats, a 360-degree camera, kick-to-open liftgate, and support for Apple CarPlay and Android Auto (though Mazda engineers say they’re working on those and will eventually offer them as a software update).

Mazda says that 48 percent of CX-5 buyers last year picked the loaded Grand Touring trim, giving the car an average transaction price just above $28,000. In other words, CX-5 buyers tend to like highly equipped models. Pricing begins, however, at just $24,985 for the front-wheel-drive Sport model, rising to $26,855 for the reasonably well equipped Touring, and topping out at $31,655 for the all-wheel-drive Grand Touring before options. On any model, the cost of adding AWD instead of front-wheel drive is $1,300.

Mazda devotes many engineering resources to ensuring its cars are more fun to drive than their competitors, and it certainly works. But the strategy doesn’t resonate with buyers, as evidenced in showrooms: from the 3 to the CX-5, Mazda’s entries tend to be pretty far down the sales rank in their segment. The company seems to be getting the message, by focusing on addressing customer complaints, like excessive NVH and a lack of certain features, with the new CX-5. It still drives well, but now also rides well, has lots of equipment, and allows occupants to converse without shouting.

Combine that with the double-take exterior styling and plusher interior, and there’s no question to me that the 2017 CX-5 is the compact crossover you want. Not the most spacious, not the most fuel efficient, not the most affordable – but definitely the most desirable.