The apogee of the Mercedes-AMG universe should be giving Porsche night sweats.

The Green Hell has a habit of chewing up and spitting out anyone who dares to set rubber to asphalt. Twisting, fast, blind curves often shrouded in fog and mist have bested even the most skilled drivers and most capable cars. A mere 1,500 miles south in the warmer, drier, and friendlier climes along the coast of Portugal sits another, less-famous, smaller track that shares similar undulating, blind curves. It’s exactly the kind of circuit that Mercedes-AMG developed the 2018 AMG GT R for, and this is where the newest spearhead of the AMG brand shows its mettle.

When Mercedes-AMG launched the GT back in 2014, it broke the old German muscle-car mold that defined the brand for years and set its sights firmly on creating a Porsche-killer. The old 6.2-liter V8 was dropped for a smaller and lighter biturbo 4.0-liter V8, and was tuned to various levels for each version of the AMG GT (GT, GT S, the recently announced and soon-to-arrive AMG GT C, and the GT R).

Sure, speed isn’t everything in the world of sports cars, but the AMG GT R recently lapped the Nürburgring Nordschleife in just 7:11 (7:10.92 to be exact) in the hands of Sport Auto journalist Christian Gebhardt. That’s faster than a Lexus LFA and the Ferrari 488 GTB. In the vein of the famed racing SLs of old, the AMG GT line evolves from a relatively comfortable grand tourer to an all-out, track-devouring supercar and, given its performance and handling both on track and off, Porsche should start worrying. 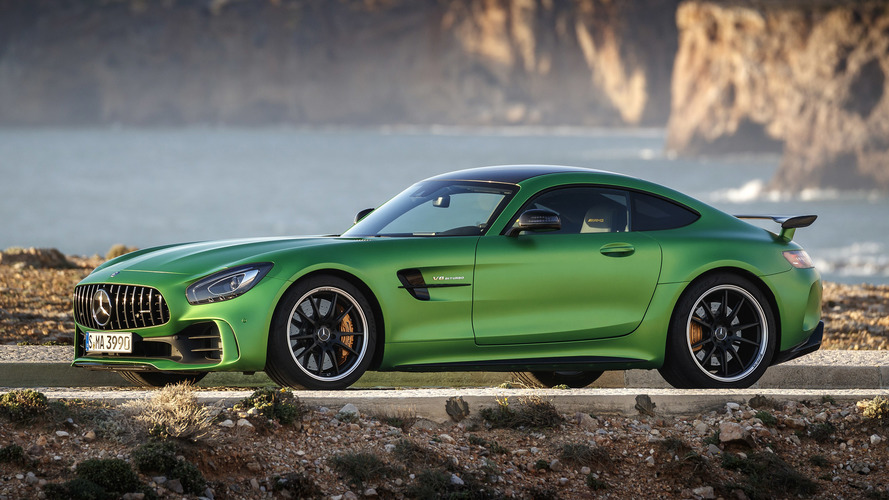 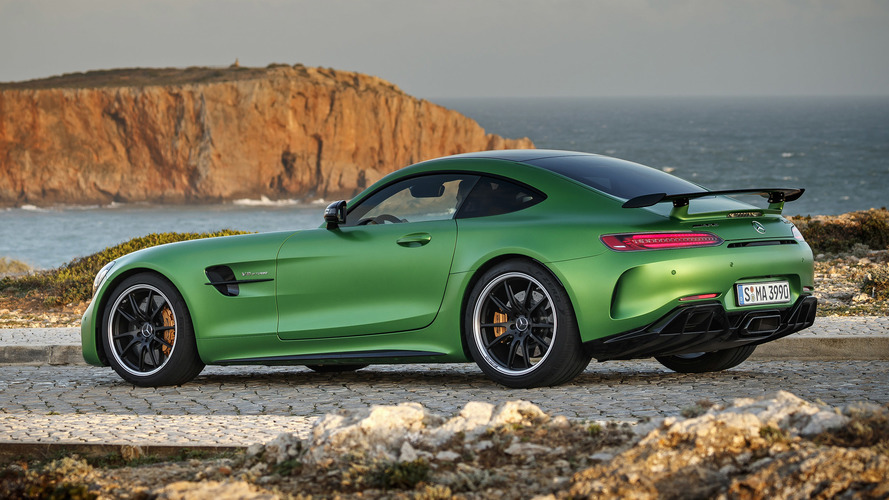 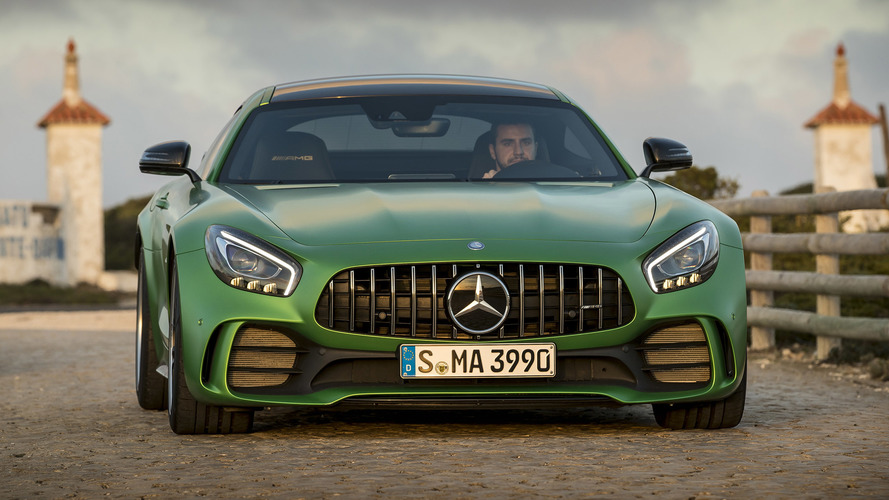 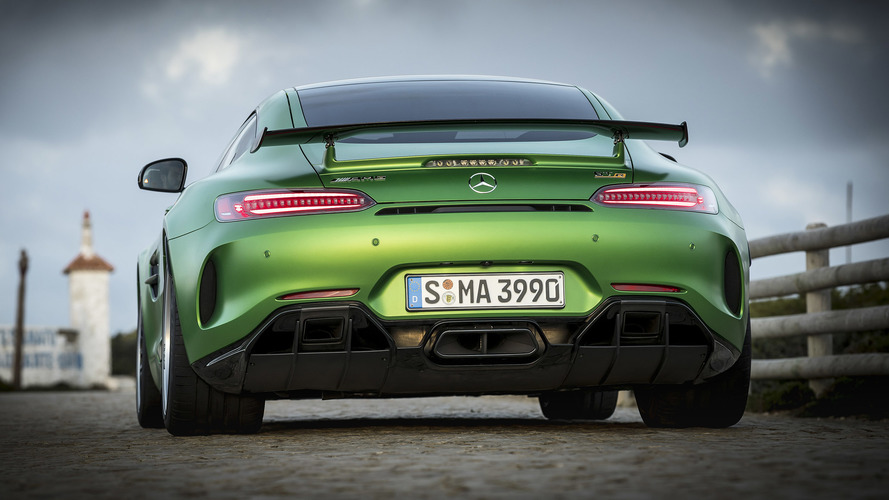 It’s comfortable enough to drive daily and powerful enough to attack the track when you want.

Developed by the masterminds in Affalterbach, the GT R sits at the top of the AMG lineup. “Both the design and engineering teams worked more closely together than they ever have in order to bring this car to this level,” AMG boss Tobias Moers told Motor1, describing the 2018 Mercedes-AMG GT R, or, as it’s become known, the Green Monster.

We had a chance to take the Green Monster for a spin on the winding roads around Portimão and for a handful of lead-follow laps on the Autodromo Algarve track. The machine was purely awe-inspiring in both situations. Like its brethren, the AMG GT R is set up to be comfortable on road and track alike. Between interior space, seat design, and various drive mode settings, it’s comfortable enough to drive daily and powerful enough to attack the track when you want.

First, there’s the adjustable chassis and steering setups that are present throughout the AMG and most of the Mercedes-Benz line. Toggle through settings using the selection wheel on the center console and you can choose Individual, Comfort, Sport, Sport+, or Race modes. In each setting the steering, throttle mapping, and suspension change to meet driver and road demands. Comfort is great for highway cruising and when you don’t want to jostle your passenger too much. Sport and Sport+ are appropriate for twisting canyon roads. Race is best on smooth technical roads with lots of open space for serious speed. Above Comfort mode, engine notes are raucous and loud. These are not the settings you’d want to utilize when busting out of your sleepy suburb for an early morning drive, but for touring the olive groves and quiet hills of the Algarve, the engine sounds were sonorous and perfect. 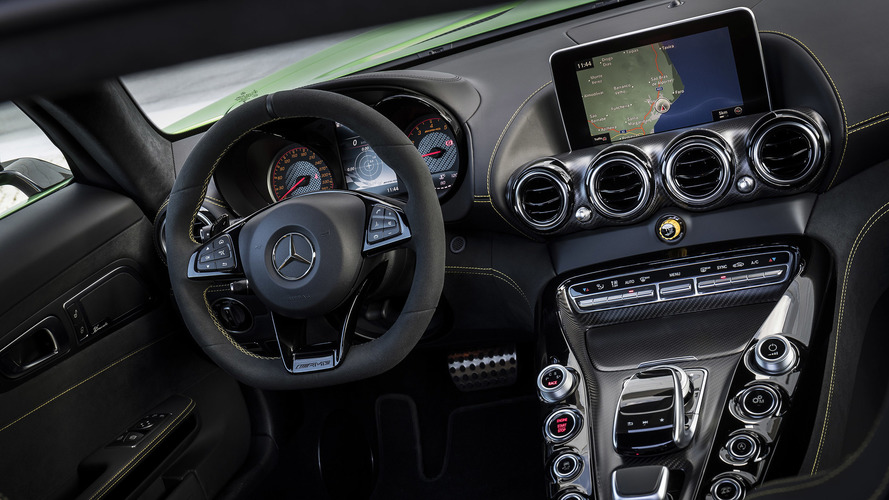 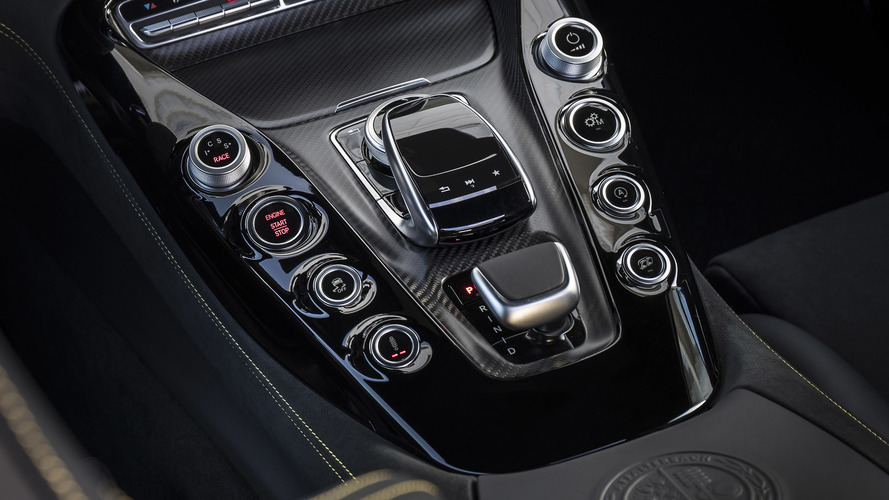 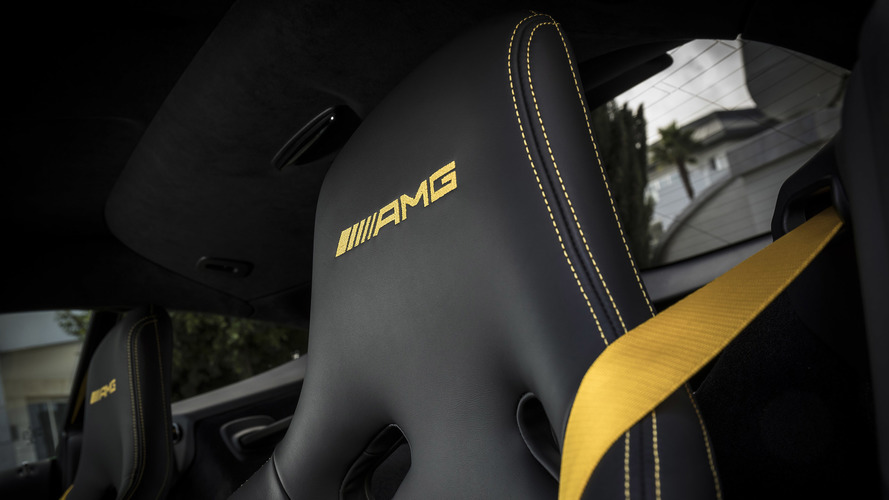 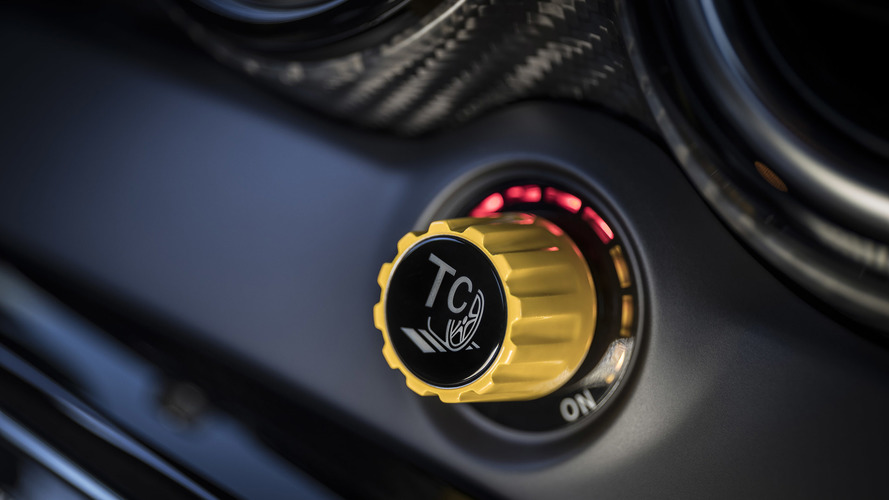 Simple to use and all within reach of the driver, the cockpit's controls are laid out like some sort of luxury jet fighter.

Given its more hardcore nature, Mercedes-AMG has also allowed for even more individualized tuning in the AMG GT R. Want separate damper settings? Push the button. How about a change in the exhaust note? Done. Kill traction control? Yes. Perhaps a way to lock out gear changes? Yep, the AMG GT R has that, too. In addition to these features, which are also available in the AMG GT and GT S models, the GT R gets the added bonus of a magic yellow knob on the dash that allows you to selectively adjust the traction settings nine different ways – something we dared not play around with on the highly technical Algarve track for fear of landscaping with the estimated $200,000 car.

The formula for speed is familiar: add power and reduce weight, and the Green Monster does both in spades. New carbon fiber bits help lighten the GT R, while active airflow systems keep the car more planted at speed. A wider body, new suspension bits, and a new active rear steering system also contribute. With 577 horsepower and 516 pound-feet of torque, the powerhouse V8 in the AMG GT R gets 74 more horsepower than its nearest relative, the AMG GT S, and it gets the same seven-speed dual-clutch transmission. That, however, is where the comparison between the two cars stops. The GT R gets a new set of turbochargers with more boost pressure and a corresponding throttle remapping, making it faster to shift and respond than the GT or the GT S. The front-mid-engine car can catapult from a dead stop to 62 miles per hour (100 kilometers per hour) in just 3.6 seconds.

Along with a new set of turbos, the GT R gets a suite of lightweight components including an all-carbon torque tube, a set of composite cross braces, a lithium-ion battery (that saves almost 29 pounds), and a carbon fiber roof, rear wing, and front fenders as standard. Should you want even more lightness, Mercedes offers a set of optional lightweight carbon fiber wheels, good for 10.6 pounds of weight savings. All in, Mercedes says the GT R weighs around 3,650 pounds. You may gawp at that, but go-faster elements like the adaptable aerodynamic panel and the independent rear steering add some of the removed weight back in. 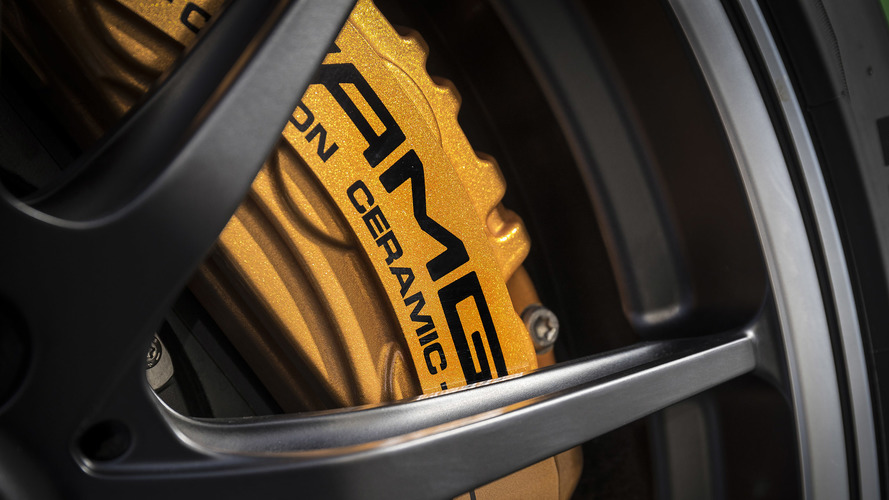 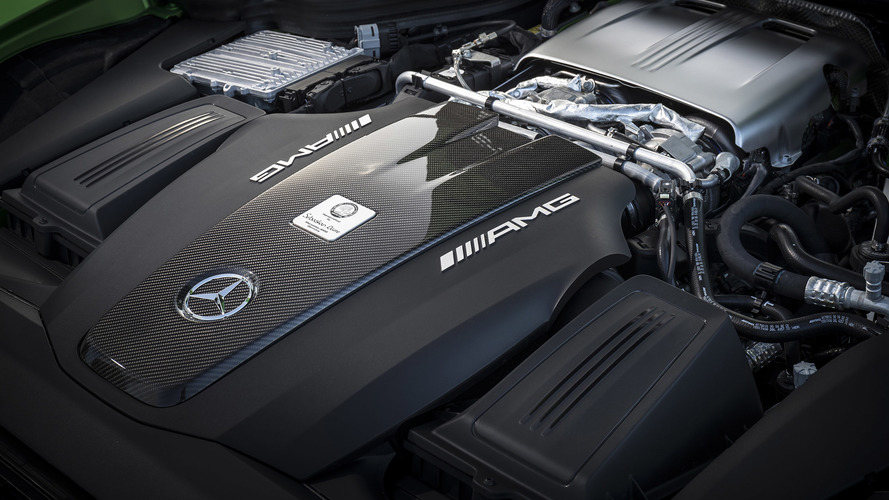 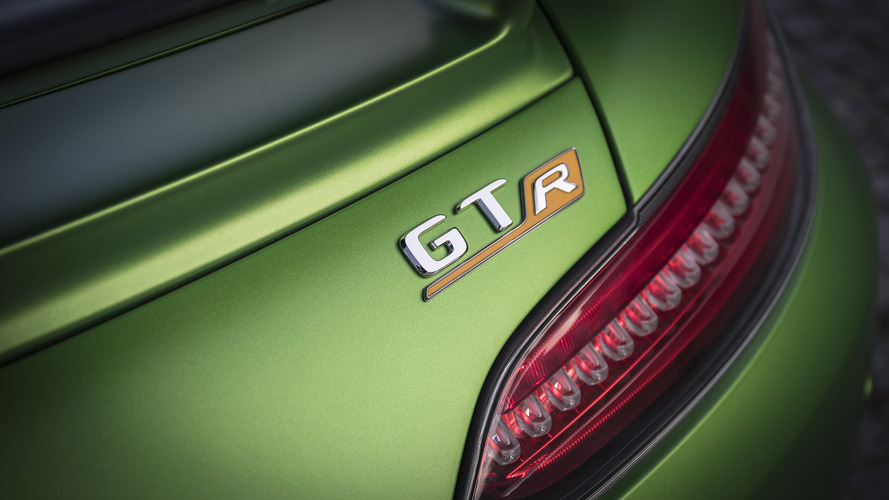 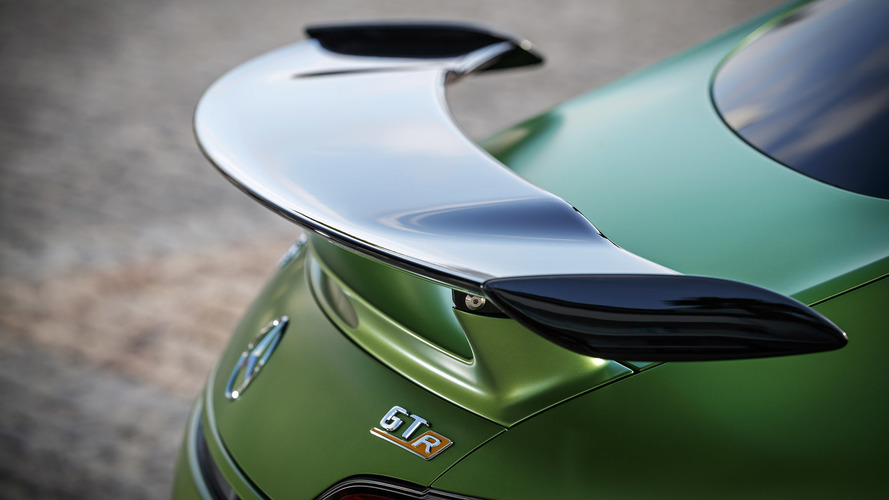 Sure, you can get tire squeal when you take a corner a bit too fast, but the GT R stays planted at speeds that would send other cars off into the runoff.

Those aerodynamic bits and the rear steering are some of the most impressive features of the AMG GT R, too. First is a new aerodynamic feature, situated just forward of the engine under the GT R. It is what product manager Joerg Letzel describes as an upside down airplane wing, and it is raised or lowered based on speed. In Race mode, above 50 mph, the flap drops to increase downforce. In driving modes below Race (Comfort, Sport, Sport+) the flap deploys at 74 mph.

In addition to this feature, Mercedes-AMG added an active air control panel at the front of the GT R. When cornering or under hard braking, louvers behind the front apron close to lower drag. When those louvers are closed they direct airflow under the car and reduce front lift.

Adding to this sensation is the new independent rear steering. Up to 62 mph, the system turns the rear wheels in the opposite direction of the front wheels, essentially shortening the wheelbase for sharp turns. Above 62 mph, the wheels turn in the same direction to essentially lengthen the wheelbase and increase stability. The result when driving at or near the limit on the track is an incredibly stable and planted feel as a result of all of these systems working together seamlessly.

Nowhere is that seamless integration more evident than when riding shotgun for a few laps around the track with AMG’s top test driver and five-time DTM champion, Bernd Schneider. It is an experience in precision, fearlessness, and faith in the technology inside the AMG GT R. Under Schneider’s skilled hands the GT R shows off its true nature as a track-capable machine. Left-foot braking and aiming for the apex of a corner, Schneider calmly takes the GT R around some of the tightest corners of the Portimao track without a second thought and the car feels like it comes alive under his direction. It hunkers down and sticks like a fly to flypaper the faster he pushes. 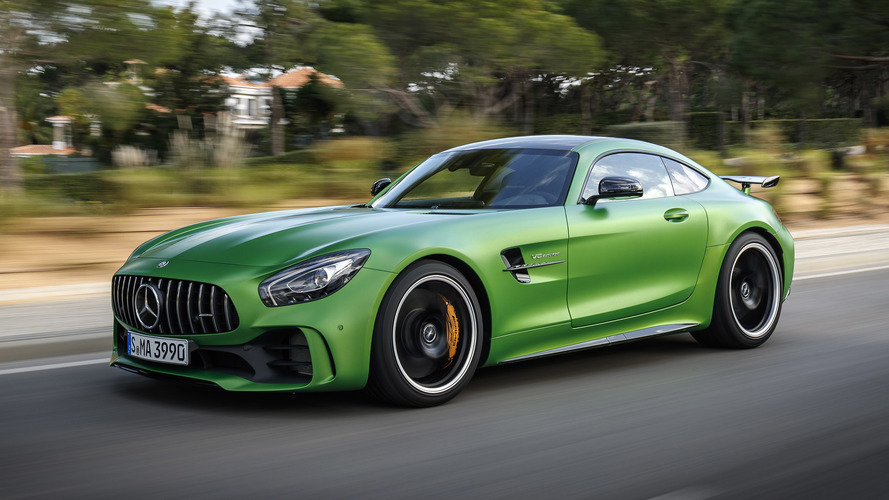 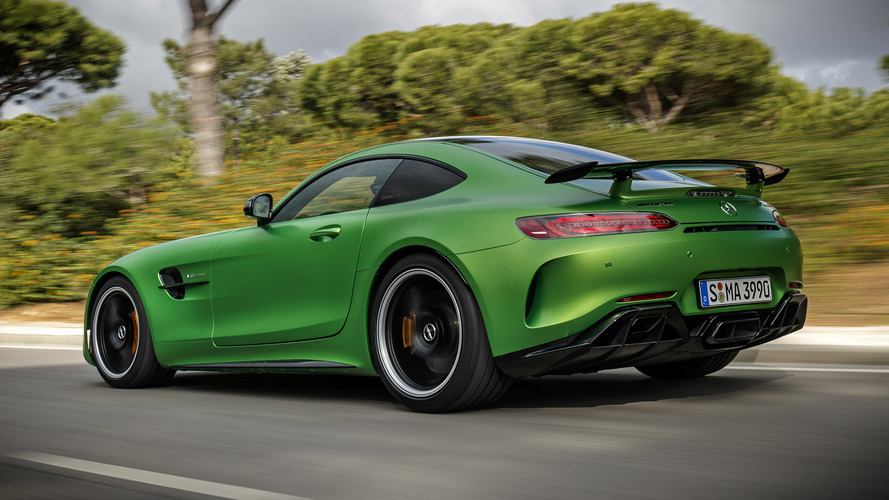 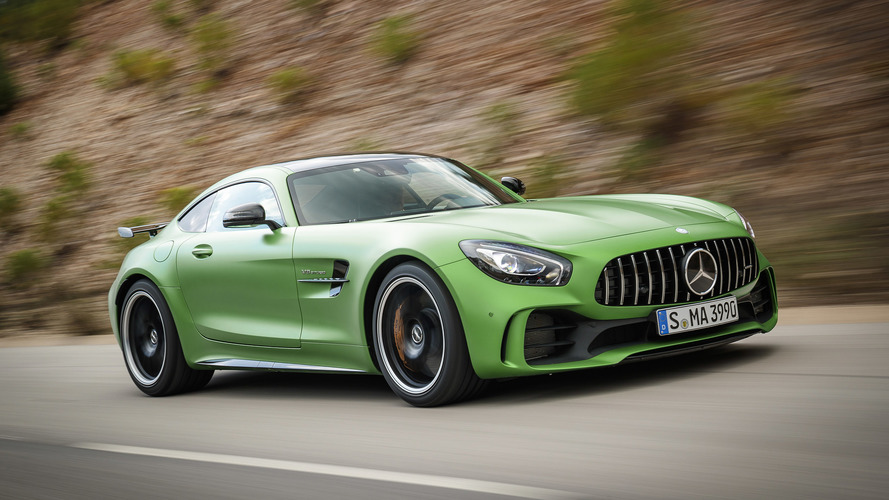 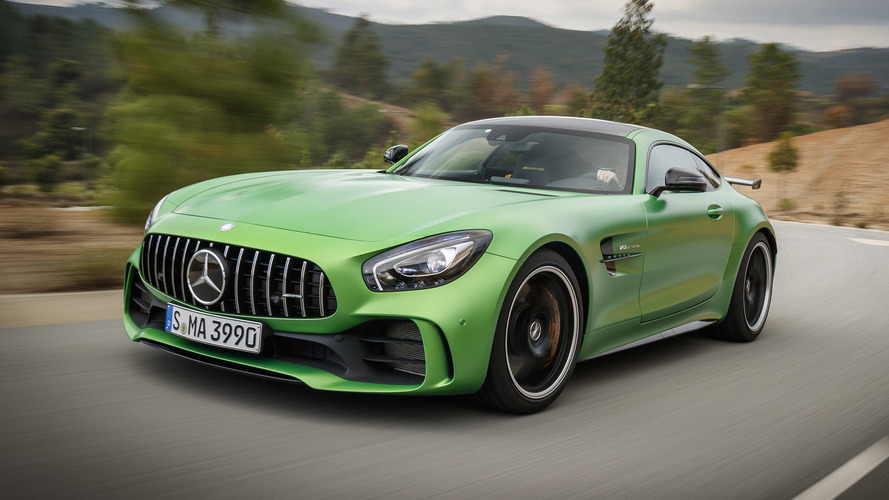 The 2018 Mercedes-AMG GT R is the top-tier predator in the race for style and speed.

Getting behind the wheel of the GT R a few laps later drives that sensation home even more. The AMG GT R can be tuned to give the most experienced driver a challenge or be changed to be more forgiving in the hands of someone less experienced. Sure, you can get tire squeal when you take a corner a bit too fast, but the traction control keeps the car planted at speeds that would send other cars off into the runoff. That in and of itself makes the GT R an incredibly capable but forgiving machine. A supercar that can be grown into as one’s skills increase, something that asks you to step up, while permitting you to learn from your mistakes on your way to faster lap times.

Add the rakish if not slightly cartoonish looks (a fellow journalist rather astutely pointed out that from the front it looks a lot like Toothless, the Night Fury dragon from the Dreamworks movie How to Train Your Dragon,) and the AMG GT R has a lot going for it. Sure, the hood seems enormous when you’re sitting in the driver’s seat and the typical, minimal, if not gorgeous aesthetic of “sensual purity” is largely missing from the design of the AMG GT R, but each and every line and crease serves the go-faster nature of the car. Inside is pure Mercedes. Simple to use and all within reach of the driver, the cockpit's controls are laid out like some sort of luxury jet fighter. The Green Monster with finesse.

So should Porsche be concerned? Yes. The 2018 Mercedes-AMG GT R is the top-tier predator in the race for style and speed. Its advanced driving dynamics and technology make it accessible to both seasoned and newbie drivers. It’s a rare thing for a supercar to feel like a machine that can grow with a driver’s ability but the Mercedes-AMG GT R has that in spades. While Mercedes hasn’t announced definitive numbers yet, it’s expected to settle around $200,000, which, in our opinion is a small price to pay for the pleasure of piloting an apex predator.