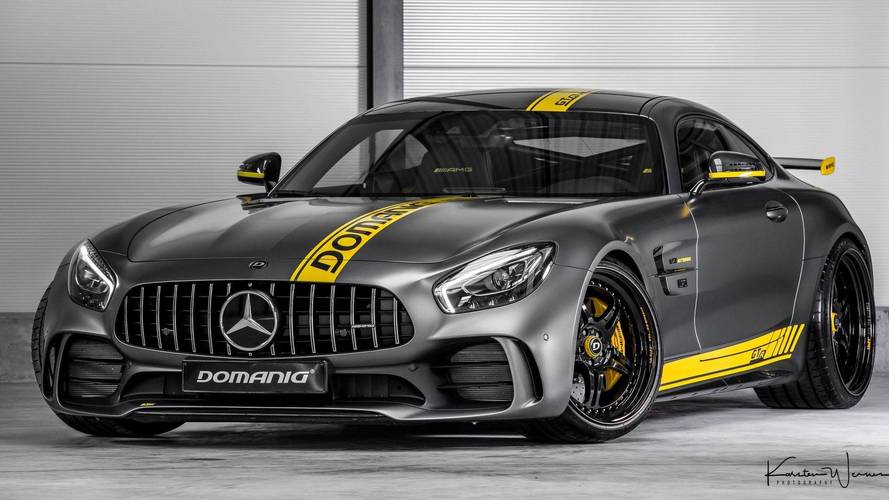 Why wait for the Black Series when you can have this instead?

The culmination of the two-door AMG GT range will mark the return of the fabled Black Series badge, but that won’t happen until 2020. If you consider life is too short and as such you’re not willing to wait until then, buy the R version and send it over to German tuner Domanig Autodesign as they’ll dial the sports car to unprecedented levels of power.

Developed in collaboration with IMSA (the tuner, not the International Motor Sports Association), the GTR project started off with a set of larger turbochargers for the 4.0-liter V8. The engineers also fiddled with the exhaust system and created a sports air filter, while an extra radiator had to be installed as well.

As a result of all these upgrades, the eight-cylinder engine was dialed to an immense 769 horsepower (573 kilowatts) and 960 Newton-meters (708 pound-feet) of torque, representing a major hike over the Mercedes-AMG GT R’s standard output of 577 hp (430 kW) and 700 Nm (516 lb-ft). To make it all happen, the tuners also optimized the engine’s electronics and reconfigured the gearbox’s software in order to make it cope with a nearly four-digit amount of torque.

Thanks to the newly gained muscle, the GT R will run to 62 mph (100 kph) in just 2.9 seconds or seven-tenths of a second quicker than the standard model. It’s worth mentioning the acceleration performance is more than just a simple number on a piece of paper as it has actually been demonstrated in a real-world test during which the GT R was also clocked at 8.8 seconds for the 0-124 mph (0-200 kph) run. Top speed has increased as well, from the series 198 mph (318 kph) to an electronically governed 205 mph (330 kph).

Aside from tinkering with the V8 engine, Domanig Autodesign fitted the GT R with a suspension lowering kit from KW that will drop the ride height of the high-performance machine by as much as 30 millimeters (nearly 1.2 inches), while a handy suspension lift system raises the front end of the car by the same amount. The tuner’s own 20-inch front and 21-inch rear wheels with a five twin-spoke design and Michelin Super Sport tires round off the changes.