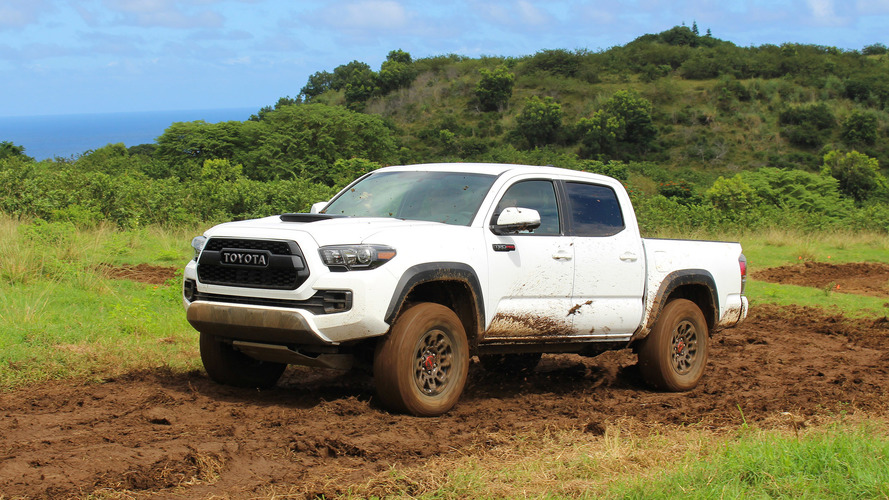 Over the rocks and through the mud, Toyota’s Taco Supreme is butch, buff, and impressive.

You put a lot of faith in a pickup truck when you’re pointed nose-first down a steep hill made of wet, volcanic pumice, the Earth eroding rapidly underneath your knobby off-road tires. But in the 2017 Toyota Tacoma TRD Pro, you engage the Crawl Control function and take your feet off the pedals – let go and let God. The braking system and hill-descent control sing the songs of their people, clanging and clunking as you battle the force of gravity on your way down, the whole time thinking that, surely, you broke the truck. But then you’re back on solid ground, safely down the hill, and the Tacoma’s like, “Okay, what’s next?”

Get The Scoop On The Tacoma:

This is just one of a few off-road stunts planned for me during a day at Hawaii’s Hāna Ranch, located on the east side of Maui. Normally, the fully operational farm quietly harvests various tropical fruits, and lets herds of cattle graze on the damp, lush Hawaiian grass. I kind of feel like a mainlander asshat, tearing through a cow pasture in Toyota’s most hardcore Tacoma, throwing mud and the occasional cow pie into the air, trying my best to get the pickup to drift its back end around a super slick turn with the four-wheel-drive system in low range and the traction control completely turned off. Hooligan stuff, really.

What you end up with is a truck that’s a real hoot to drive off the beaten path, and outrageously capable in serious off-road situations.

Toyota’s TRD Pro series has been on sale for a few years now; the Tacoma, Tundra, and 4Runner all get this beastly treatment. But 2016 brought a new generation of the Taco, and so, a new TRD Pro is born. It follows the same formula as its predecessor: start with a nicely equipped pickup, add some choice off-road bits. What you end up with is a truck that’s a real hoot to drive off the beaten path, and outrageously capable in serious off-road situations.

Mechanically, the TRD Pro is largely identical to the Tacoma TRD Off-Road trim on which it’s based. The 3.5-liter V6 carries over unchanged, producing 278 horsepower and 265 pound-feet of torque, and buyers can opt for either a six-speed manual or automatic transmission. The stick-shift is fun, and its long-travel shift throws and longer-travel clutch action feel appropriate here in small-truck duty. But the auto tranny works a treat, too, keeping the Taco pegged in the right gear whether you’re cruising or crawling. A new TRD stainless steel cat-back exhaust makes the Pro sound a bit meaner than standard Tacos, but it doesn’t exactly growl with purpose.

The Pro Taco doesn’t beat you up on rocky roads and dusty trails.

Obviously, the important enhancements here are at the suspension level, where the stars of the show are the Fox 2.5 internal bypass shocks. They have a specific TRD tune that’s truly wonderful – bombing through fields and through muddy ruts, the Tacoma is composed and surefooted. Hell, it’s actually quite comfortable, while still sending plenty of communication to the driver about what’s going on underneath you. And that’s with a few other suspension modifications, too, including TRD front springs with a one-inch lift, a new off-road-tuned rear leaf spring setup, and some serious P265/70R16 Kevlar-reinforced (yep) Goodyear all-terrain tires, wrapped around unique 16-inch black alloy wheels. The Pro Taco doesn’t beat you up on rocky roads and dusty trails. I don’t imagine it’ll fly across the desert like a Ford F-150 Raptor, of course, but it’s the closest you’ll get in the midsize truck world.

Testing the Taco through the mud and grass of Hāna Ranch is all well and good, but I’ll need to wait until I can get the TRD Pro on paved roads before talking about things like NVH issues and overall handling. But as far as I can tell, the steering feel is just as vague as other Tacoma models, and while the added sidewall of the all-terrain tires sure does improve ride comfort, it probably isn’t great for road noise.

It comes one way, in Double Cab, short bed configuration – your options are limited to transmission, and whether you want it painted red, white, or gray.

All in, this is a very nicely equipped truck. The interior is basically carryover from the TRD Off-Road, and includes heated, leather seating surfaces (Toyota points out the fact that leather is easier to clean than cloth), a seven-inch Entune infotainment system with navigation, Qi wireless smartphone charging, a 4.2-inch color gauge cluster display with an inclinometer and roll/pitch displays, and TRD-specific floor mats and shift knob. But a carryover interior means I still find the seating position to be kind of awkward – I sit in the Tacoma like a sedan, not a high-riding pickup.

Outside, this Taco Supreme certainly looks the part, with black cladding around the wheel arches and a super butch stance – I recommend the covered-in-mud look, personally. It comes one way, in Double Cab, short bed configuration – your options are limited to transmission, and whether you want it painted red, white, or gray. The TRD Pro aluminum front skid plate now features an access port to make oil changes easier, and the foglights are a Rigid Industries design – they may be super small, but they cast a beam of light that’s longer and wider than your typical fogs, all while being SAE- and DOT-compliant.

It looks killer, is pretty comfy inside, and will climb a mountain if you ask it to.

All of those changes are functional, and helpful for when the going gets tough. Yes, a standard Tacoma TRD Off-Road and a larger Tundra TRD Pro can follow the same path blazed by the Pro Taco, but it’s the super-tough areas where the new truck excels. Just as my stomach sinks while I’m about to plunge down a steep, shaky hill, so it does when I hear the Kevlar-lined tires scraping and scuffing against wet, jagged rocks in a flowing river bed. But with careful spotting and light throttle applications, the Tacoma TRD Pro crawls itself out of basically any jam. Tell Jennifer you're going to make it to the lake – where the TRD Pro is going, it doesn't need roads.

Starting at $40,760, the TRD Pro sits at the top of the Tacoma range, a full $1,965 more expensive than the starting price of a Limited model. Of course, that also means the TRD Pro is a whole $9,020 dearer than a TRD Off-Road, which is already a hella-capable truck. But remember, the Pro comes loaded to the gills with premium amenities, not to mention the best off-road equipment Toyota sells. An out-the-door, as-tested price of $43,700 isn’t too bad, all things considered. It’s more comfortable than a Jeep Wrangler, anyway.

No, the Pro isn't far-and-away more extreme than other TRD models, but it offers the best of the best in terms of Toyota’s rugged capability. It looks killer, is pretty comfy inside, and will climb a mountain if you ask it to. For serious off-road enthusiasts, it’s a great way to get a factory-ready truck that’ll tackle just about anything you throw its way. 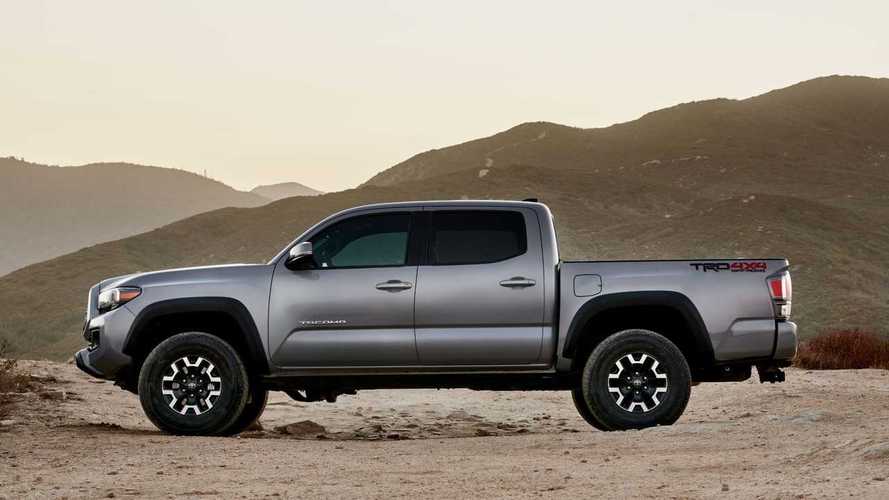