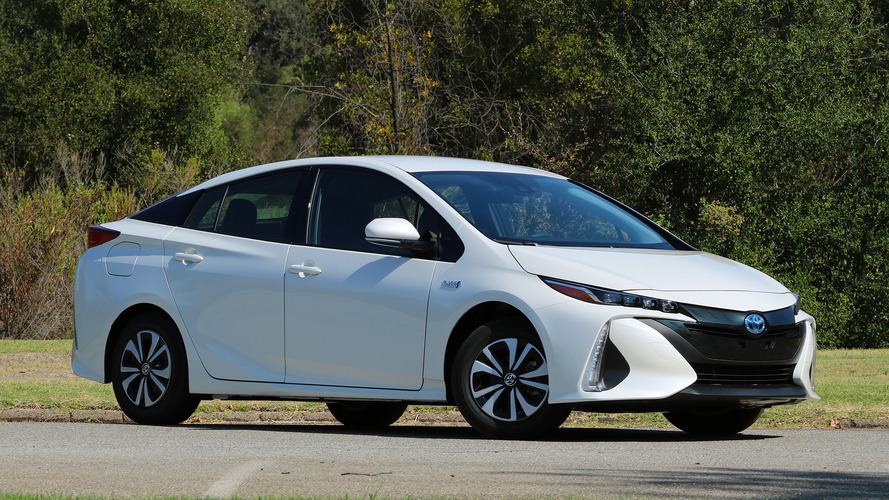 A bargain compared to a Volt, but the Prime can’t match the Chevy’s EV range.

Gas is pretty cheap now, and our collective memory is short: truck and SUV sales are booming, while Prius sales are down 26 percent year-over-year. Probably not the ideal time to launch a plug-in hybrid model, then. Nonetheless, lengthy car development cycles can’t be changed, so Toyota is rolling out the new Prius Prime, the plug-in version of the world’s most famous and best-selling hybrid, to dealers this November.

Compared to the last Prius Plug-In, the Prime is more efficient, with a larger battery and a longer driving range. It has an even more unusual look, improved driving dynamics, and more technology. Is that enough to entice shoppers in the era of $2.20 gasoline?

About that design: To fit the big battery pack under the trunk floor without totally eliminating cargo space, Toyota had to stretch the Prius Prime by 4.2 inches in length compared to the regular model, though the wheelbase is unchanged. The new front fascia helps distinguish the Prime from a regular Prius, but it increased aero drag. So out back, engineers fitted a very unusual “double wave” rear window on the liftgate. It has three subtle radii and, though Toyota wouldn’t comment, is probably very expensive to replace. Below that, the taillights form an elongated infinity-symbol design. It’s weird to behold in daylight; it will produce a distinctive light signature at night.

It’s not quite as ugly as the regular Prius, nor will the Prime go down in the annals of car design as the prettiest Toyota ever sold.

Up front, squinty LED headlights emerge, V-like, from the black grille (with active aerodynamic shutters) that forms a stark contrast with this test car’s white paint. The sloped nose and catfish-like lower fascia with vertical running lights almost recall the look of some new Acuras. Overall, it’s not quite as ugly as the regular Prius, nor will the Prime go down in the annals of car design as the prettiest Toyota ever sold. At least it achieves an ultra-low 0.25 drag coefficient.

Under the hood, the Prius Prime uses essentially the same powertrain as the standard Prius. A 1.8-liter inline-four gas engine runs on the efficient Atkinson cycle, delivers 95 horsepower, and shuts off whenever possible. Two motor-generators, dubbed MG1 and MG2, charge the battery and provide motive power, while a continuously variable transmission combines everything and turns the front wheels. Total system output is 121 horsepower.

MG2 is the primary drive motor, with a rating of 71 hp, and can propel the Prime up to 84 miles per hour on its own. The powertrain’s smaller motor-generator, called MG1, also plays a role in acceleration. In the regular Prius it only cranks the gas engine and charges the battery, but in the Prime, it’s attached to a one-way clutch that lets it help drive the wheels at low speeds. Toyota says the extra oomph from MG1 cuts the hybrid’s 0-35 mph acceleration time by about a second. That’s helpful given that curb weight is up about 300 pounds compared to the standard Prius.

The Toyota Prius Prime can’t drive as far as the Volt on electric power alone: Toyota expects an EPA figure of 25 miles, versus 53 miles for the Volt.

The lithium-ion battery pack has a capacity of 8.8 kilowatt-hours, double the rating of the old plug-in Prius but far behind the Chevy Volt’s 18.4-kWh unit. As a result, the Toyota Prius Prime can’t drive as far as the Volt on electric power alone: Toyota expects an EPA figure of 25 miles, versus 53 miles for the Volt. But when using the gas engine and motor together, the Prius Prime will achieve 54 mpg combined; on a full charge and full tank of gasoline, you’ll travel 640 miles and average 133 mpge. Compare that to the Volt’s 42 mpg, range of 420 miles, and combined efficiency of 106 mpge.

The bottom line is that for anyone with a commute between 25 and 50 miles long, the Volt might save more gas. But if you, say, decide to drive 300 miles in a day, the Prius Prime will be the thriftier vehicle. Toyota says that 50 percent of American drivers only need 25 miles of EV range for their daily commutes, but your mileage might vary.

No matter how many miles you drive the Prime, you’ll find it has all the charm of the regular Prius from behind the wheel. Which is to say you’ll love this car if you hate driving cars. It insulates drivers from the outside world, and there are very few actual bad habits. The suspension filters out road imperfections but exhibits massive travel over bumps, as it copes with the heavy battery over the back wheels; the steering is ultra-light and artificial, but no worse than in cars like a Corolla; and the brake pedal feel is soft, squishy, and unpredictable until you’ve driven a dozen miles or so. By virtue of the quiet powertrain, wind noise is apparent at highway speeds, but given how little the gasoline engine runs, overall it’s a hushed cabin.

You’ll find it has all the charm of the regular Prius from behind the wheel, which is to say you’ll love this car if you hate driving cars.

With the battery fully charged, low-speed acceleration in EV mode is swift and linear and hassle-free. When the gasoline engine kicks in to aid with propulsion, it thrums and buzzes; it’s quieter and less thrashy than the old Prius, but still not exactly a refined noise. Acceleration is leisurely above 30 mph, with perfectly adequate power for everyday suburban driving so long as you can be patient on freeway entrances and when passing on two-lane roads. Driving fun, feedback, and enjoyment are all absent.

The drama-free experience is aided by great forward visibility. You sit quite high in the car, with the steering wheel feeling like it’s in your lap, so the car’s dashboard essentially fades into your peripheral vision while driving. The digital speedometer sits at the top center of the dash, along with configurable gauges for efficiency tips, the trip computer, and so on.

It’s worth opting for a Premium or Advanced trim level to get the new 11.6-inch, portrait-style touchscreen in the center stack. It’s as impressive in size as the touchscreens in a Tesla or a Volvo XC90. What’s not too impressive is the software, which is basically the same low-res, dated infotainment functionality on any other Toyota touchscreen. But the screen’s dimensions allow you to keep a navigation map up top while swiping climate, audio, or phone controls onto the lower half of the display. Neither Apple CarPlay nor Android Auto is available, but there is a smartphone app that lets you control your Prius Prime’s charging time, precondition the cabin, and so on.

The seats are comfortable enough and the plastics not too rattly or boring to look at, but a Honda Civic or Mazda3 cabin is prettier.

The Prime’s interior is, like in a standard Prius, perfectly acceptable without rising above the average of what you can buy for this price point. The seats are comfortable enough and the plastics not too rattly or boring to look at, but a Honda Civic or Mazda3 cabin is prettier.

There are only two seats in the rear, and they’re extremely upright, bucket-like units with what feels like a 90-degree seatback angle. Riding there for a few miles did wonders for my posture but was otherwise not particularly pleasant; rear headroom is also only just enough for someone of average height. Cargo space behind the rear seats, which fold easily, is 19.8 cubic feet – significantly less than the regular Prius, which has 24.6 or 27.8 cubic feet, depending on trim level, because the bigger battery pack takes up a lot of space.

Charging with the built-in 120-volt cord takes about five-and-a-half hours, but using a 220-volt Level 2 charger, the kind found at virtually every public car charging station in the world, can fully replenish the battery in two hours and ten minutes. As an added perk, every Prius Prime buyer gets a $100 credit for the global ChargePoint network. That’s a lot of free electricity.

Its overall efficiency, coupled with its sub-$30,000 starting point, prime it to be nearly as much of a hit as the original Prius.

The biggest selling point for the 2017 Toyota Prius Prime is its affordability. The entry-level model, the Prime Plus, starts at just $27,920 with destination, and it’s eligible for a $4,500 federal tax credit. Standard equipment includes push-button start, LED lights, a 7.0-inch touchscreen, a backup camera, adaptive cruise control, and pre-collision braking with pedestrian detection. Moving up to the Prime Premium, which adopts features like the 11.6-inch vertical screen and wireless phone charging, and heated seats, is $29,620, and the fully loaded Advanced model is $33,930. Those are seriously competitive numbers given that the Chevy Volt LT lists for $34,095 and the Volt Premier is $38,445.

The Volt comparison is apt because it’s the car most similar to the Prius Prime in size, technology, and efficiency goals. For me, the Volt is the better-looking, better-driving vehicle that offers far more real-world EV utility. Yet the Prius has worldwide name recognition (and adoration) for which the Chevy could only hope.

As a plug-in hybrid in general, the Toyota Prius Prime disappoints in terms of its so-so driving range and unremarkable driving experience. But its overall efficiency, coupled with its sub-$30,000 starting point, prime it to be nearly as much of a hit as the original Prius. It makes plug-in mobility available to almost anyone, and though 25 miles of EV range falls below the segment best, it will still be enough for urban drivers to make many short trips without using any gasoline. So long as you can get past the funky design, the Prime makes a case for itself by saving a lot of gas without costing a bunch up front.

Update: Toyota has confirmed that the Prius Prime returns a combined EPA rating of 133 mpge, not 124 mpge as was estimated when we drove the car. 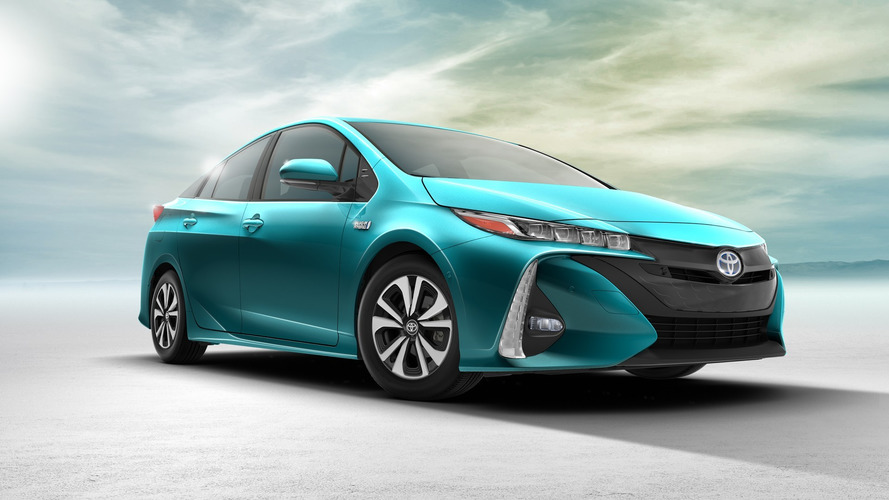