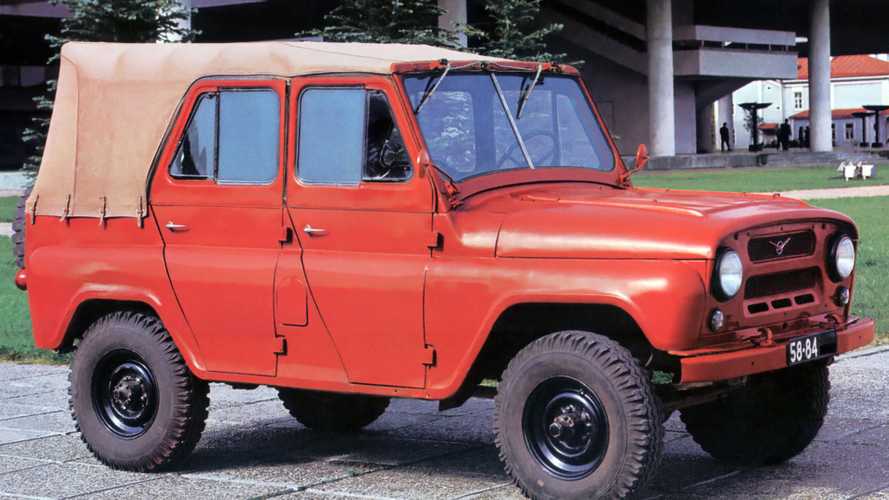 Say hello to one of the most capable offroad vehicles on the planet – the UAZ-469.

Say hello to one of the most capable offroad vehicles on the planet – the UAZ-469. It was developed from the GAZ-69, a military light utility vehicle, and was used in the armies of most of Eastern bloc's countries.

Introduced in 1971, the 469 was manufactured in Russia, Germany (2003 - 2007 as the Baijah Automotive), Cuba, Azerbaijan, Vietnam, Ukraine, and even in the United States (1997 – 2005). In fact, UAZ (Ulyanovsky Avtomobilny Zavod) is still offering a modernized version of the model to customers, called the Hunter.

Originally, the offroader featured a 2.5-liter 4-cylinder naturally aspirated engine with 71 horsepower (56 kilowatts), mated to a 4-speed manual gearbox and a permanent all-wheel drive. The unit was able to run on gasoline with octane rating as low as 72.

40 years after it was introduced, the 469 is still available on the Russian market. And this is truly impressive, because the architecture of the vehicle remains almost unchanged for the last four decades. Unlike most of the modern SUVs and crossovers, the UAZ was a real offroad vehicle even in the basic version (468B) with ground clearance of 8.26 inches (210 millimeters) - a constant value until today.

It’s 2016 and most of the niches in the automotive industry are filled, but the modern Hunter based on the 469 lives in its own category – rugged retro-styled vehicles, in the same vain as the popular Ural motorcycle series.

UAZ is keeping things simple even today, when emission standards and customer requirements are putting all manufacturers under pressure. For example, the front suspension features dependent coil setup, while the rear axle sits on leaf spring. The car still uses drum brakes on all four wheels.

While some might say this is just an archaic conception for a offroad vehicle, we love it because it’s simple, robust, reliable, and retro-romantic. It's cool and it still deserves a place under the sun.