Electric vehicles come with many perks, but there is a cost. Cars will lose their exhaust notes as they transition away from combustion power. Futuristic sounds try to fill the role, but there’s no genuine replacement for eight angry cylinders. So Rich Benoit of the Rich Rebuilds YouTube Channel decided to convert a Tesla Model S into a combustion-powered sedan with a Chevy Camaro V8 hiding under the frunk.

The car isn’t completely dialed in, though the crew finished it in time for this year’s SEMA Show with it running under its own power. The car still needs to hit the dyno to perfect the air-fuel mixture, which will happen at a later time. That will reveal what the LS3 V8 from the Chevy is making along with the how much it weighs. However, it does run under its own power just fine. To prove it, the YouTube channel took the car out on a set of errands that had it picking up kids from school, grabbing fast food, and scheduling a service appointment at a Chevy dealership.

The converted Tesla has no trouble running around town, which included stopping to refuel. The employees at the Chevy dealership were quite enamored with the build, too. That’s where it will have its next oil change, thanks to the Camaro engine. Inside, the car is mostly stock. There’s a transmission tunnel, a sequential shifter, and a few screens to display vital engine information, but the rest of the interior is stock – and it works. That includes the Bluetooth, the navigation, and the steering-wheel controls. 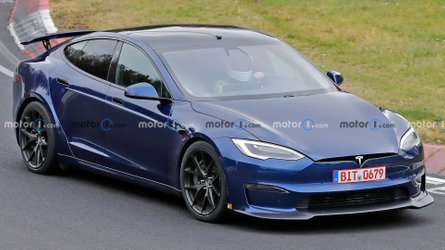 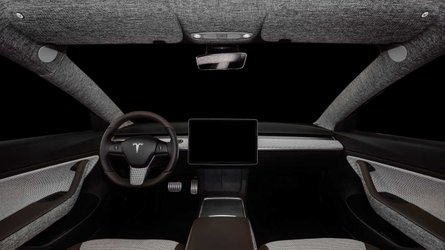 It’s quite a strange dichotomy to see the Tesla Model S rocket past with a growling V8 exhaust note, but it is a car that exists in the world. It’s also a car that won’t please Tesla fans, though it doesn’t appear as Rich and crew care too much about about any internet kerfuffles. We hope to see more videos in the coming months chronicling the build as it’s dialed in.