It's begging for more sun. Any takers?

The Porsche Carrera GT is certainly the most iconic and most popular nameplate coming out of Stuttgart, but it certainly left a mark in the automotive fandom. You can say that that's more of a scar that's left in the hearts of Porschephiles, given the rear mid-engine sports car's short existence. Blame it on the increased and ever-changing safety regulations, but of course I'm kidding.

From 2004 to 2006, Porsche produced a tad fewer than its intended 1,500 units, selling 1,270 Carrera GTs in total. And it looks like only one of those vehicles sold came in Dark Olive Metallic color, featured in the video above.

Uploaded over at YouTube by TheTFJJ, this olive green Carrera GT is part of the Octane Collection in the UK. It may look black at first glance, but it's actually painted in Dark Olive Metallic paint that shows a deep green hue under the sun. It looks really gorgeous, complemented by an Ascott Brown interior to complete the Carrera GT's understated design.

Another thing to love about the Carrera GT here is of course its glorious naturally-aspirated V10 that resides behind the seats. The 5-minute video above captured its aural delight, and we couldn't thank the uploader more for doing so. No wonder Audi thought that this car was a serious Audi R8 contender. 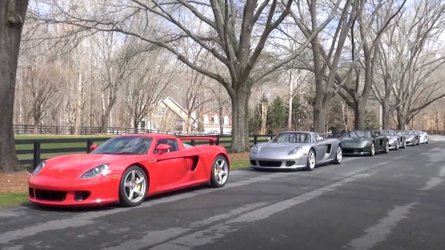 What's Better Than A Porsche Carrera GT? Six Of Them
⠀ 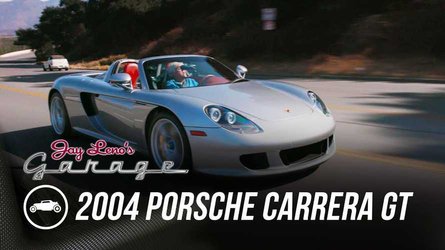 This got us to thinking – a Carrera GT, with a paint scheme that demands sunlight and its targa top, seems out of place in the cloud/rainy UK, don't you think? If you agree, well, you're in luck as this car, along with the other exotics you've seen in the video, are actually for sale.

Don't expect the Carrera GT to come cheap though. It might not be the most popular Porsche of all time, but it is still a rare commodity, especially in this one-off color.