Don’t expect too many changes when the production version arrives for 2022.

The Jeep Wagoneer family, including the range-topping Grand Wagoneer, is one of the automaker’s hallmark vehicles. Aside from the CJ and Wrangler, perhaps no other vehicle is as instantly recognizable as a Jeep as the original Wagoneer (codenamed SJ). We’ve been anticipating the return of the big Jeep for quite some time, and today, the company is finally throwing us a bone.

There’s a caveat, though. The Grand Wagoneer revealed today is technically a concept, meaning we’ve still got a fair bit of road before we reach our dealer-ready destination. But as concepts go, this one sure looks pretty production-friendly, with none of the oversized wheels, unfeasible lighting elements, and miniscule-to-nonexistent side-view mirrors usually seen on design studies. Instead, the Grand Wagoneer concept looks for all the world like the machine we might see in dealer showrooms for the 2022 model year. Whether we like that look or not depends on who you ask, though.

Some of us on staff are absolutely enamored with the seven-seat Jeep Grand Wagoneer concept’s appearance. Its bold front end boasts a newly slim iteration of the brand’s seven-slot grille, bookended by narrow, knife-blade headlights. On the concept, an LED front light bar spans the entire width of the SUV, intersecting with the top of the grille and providing a solid base for the concept’s “WAGONEER” hood badging – the Jeep script found on the Grand Cherokee’s nose is gone, you’ll note.

Production Version Spied On The Street: 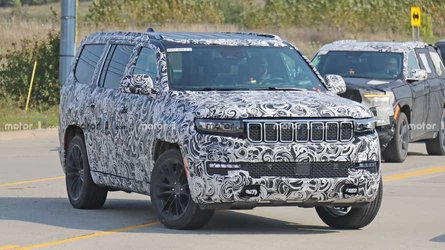 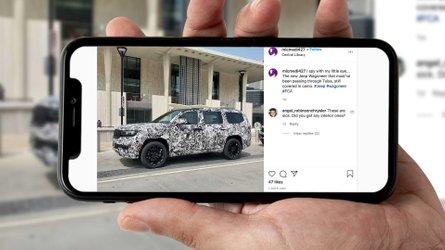 2022 Jeep Grand Wagoneer Spied Looking A Lot Like The Concept

The chin-like front bumper features two stacked openings, with tow hooks found within the lower intake and attractive fog lights faired into the upper aperture. A generous band of burnished chrome sweeps between the two, and the lower front bumper (along with the rocker panels, lower rear bumper, and roof) is painted metallic gunmetal gray.

That contrast-painted roof is the most compelling styling feature of the side view, recalling the bygone Ford Flex somewhat. The Grand Wagoneer concept incorporates a painted A-pillar, however, modernizing the look. The B-, C-, and D-pillars are body-color, and both the window openings and the contrast roof are rimmed in that same dark chrome. “GRAND WAGONEER” badging, replete with an US flag, appears on the lower front doors, leaving no question as to this vehicle’s heritage or origin. God bless America.

Around back, the license plate opening is incorporated into the tailgate using a surround that recalls the shape of the front grille, an effect that dovetails into the nearly full-width taillight panel. The inset, squared-off rear hatch glass has us wondering if it retracts into the tailgate, à la the original Wagoneer (or the more contemporary Toyota Sequoia and 4Runner) – Jeep’s mention of “open-air freedom” in the press release has us all the more curious. Mercifully free of any faux skid plates, the rear bumper aligns neatly with the vertical rear end.

With all of that said, we wish the Grand Wagoneer concept were a bit more retro-inspired. The upright rear end, contrast-painted roof, high hood, and swept-back windshield remind some of us of the Rivian R1S, while the illuminated and chrome-finished grille looks a bit like that of the forthcoming GMC Hummer EV. Your author, for example, thinks the concept is a fine-looking SUV, but a milquetoast Grand Wagoneer. A flat beltline that sits even with the hood and a triangular D-pillar would work wonders to connect this modern machine with its legendary forebear.

One area in which the Grand Wagoneer concept leaves its old man in the dust is in-cabin technology. The elegantly styled cockpit is dripping with modern touches, including seven, count ‘em seven, information screens that run Uconnect 5, which Jeep says is five times faster than the already excellent Uconnect 4. The driver sits behind a 12.3-inch reconfigurable display, while the passenger gets their own 10.3-inch touchscreen infotainment system right on the dashboard.

A split-screen layout similar to Land Rover’s TouchPro Duo appears in the center stack, with a 12.1-inch upper display serving as the primary infotainment system. A 10.3-inch lower touchscreen mounted near the center console is called a “comfort display,” operating features like seat massage and lumbar adjustments. A few hard climate controls join a tuning and a volume knob, providing a few logical, analog inputs to go along with the digital-heavy front cabin.

In the back, rear-seat passengers get their own 10.3-inch center console display. Jeep didn’t explain what this feature did, but we think it probably manages the climate and seat controls. In addition, a 10.1-inch touchscreen display appears on each front seatback for the rear-seat entertainment system. McIntosh Laboratory audio appears in the Grand Wagoneer concept, representing a rare foray into in-car audio for the company.

A lavishly styled interior houses all of that extensive technology. Jeep placed a special focus on renewable luxury for the interior of the Grand Wagoneer. For example, the seats, dashboard, and door panels are crafted not from leather, but from PUR, a sustainably crafted synthetic material. Recyclable Dinamica suede appears on the headliner, while the premium carpets are made of recycled-content Thrive fiber.

The dashboard’s distinctive wing shape is hewn in structural aluminum and inlaid with 3D-surface lacewood, the latter of which also appears on the door panels and center console. Jeep says it chose the material to recall the vintage SUV’s signature wood exterior paneling, retelling “a new chapter of the original Grand Wagoneer story in a modern way.”

However you spin it, the interior looks to be a fabulous place to spend time. Clever details abound, like an aluminum wordmark inscribed directly onto the passenger-side wood trim and an engraved “Est. 1963” on the instrument panel caps – hidden when the doors are closed – recalling the model year of the first Wag. A Grand Wagoneer–badged steering wheel looks appropriately posh and also hearkens back to the original SUV with its two-spoke design.

Electrified For The Future

Jeep has already promised an electrified variant of each one of its models – including the legendary Wrangler – in the next few years, and it makes sense that the Wagoneer is part of that plan. The concept, for example, features a plug-in hybrid powertrain, though details are scarce. FCA’s only current plug-in is the Pacifica Hybrid, although we doubt that vehicle’s 3.6-liter V6 and continuously variable transmission are found under the Wag. Instead, the concept might feature a 5.7-liter V8 with plug-in technology, producing somewhere in the neighborhood of 450 horsepower and 500 pound-feet (336 kilowatts and 678 newton-meters).

The production-spec Grand Wagoneer will probably only offer a plug-in powertrain as an option. It's possible that a long-rumored inline-six will make its FCA debut on the Wagoneer, and given the SUV is expected to share much of its structure with the Ram 1500, we think the eTorque mild-hybrid 5.7-liter V8 will available as a middle option. The plug-in powertrain will likely be the Jeep brand’s flagship engine.

Just about every Jeep short of an SRT has some reasonable off-road capability, and we see no reason to expect less of the Grand Wagoneer. The company promises three available four-wheel-drive systems, Quadra-Lift air suspension on independent front and rear axles, and unmatched towing capability. Given the Grand Wagoneer is expected to compete with the Chevrolet Tahoe, GMC Yukon, Ford Expedition, and Lincoln Navigator, a maximum towing capacity of more than 9,000 pounds seems likely. 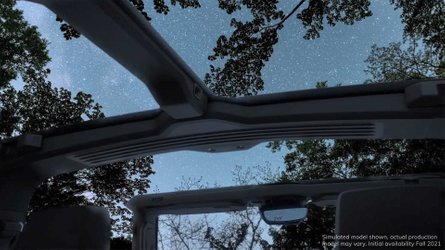 Concept In Name Only

Given its seemingly production-ready proportions and features, we think the Grand Wagoneer seen here is merely a slightly veiled preview of the new SUV. What’s more, Jeep says that Wagoneer will become a premium “portfolio of vehicles,” possibly indicating luxurious variants of existing models or an all-new sub-brand of Jeep vehicles.

The company has confirmed that both the Wagoneer and Grand Wagoneer will be built in Warren, Michigan, with production beginning next year in the same plant that builds the Ram 1500. Expect the commodity-spec Wagoneer to pursue the Chevrolet Tahoe and Ford Expedition, while the more luxurious Grand Wagoneer will have its sights set on the Lincoln Navigator, Cadillac Escalade, and Range Rover. With rivals like that, we think the Wagoneer will start at $45,000, with the Grand Wagoneer possibly demanding $60,000.