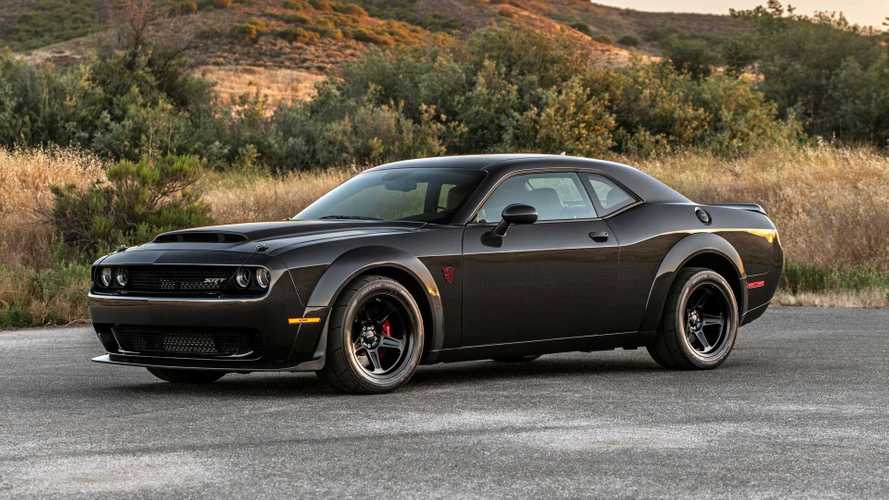 Update, 8/03: After a week of bidding, SpeedKore's carbon fiber Dodge Challenger SRT Demon sold for a whopping $160,000 on Bring A Trailer, the website indicated in a Tweet. For reference, the one-of-five SpeedKore Challenger costs $75,000 more than the factory Demon did when new.

Friends, we have good news and bad news. The good news is that, if you missed getting one of the 3,300 Challenger Demons Dodge built for the U.S. and Canadian markets, here’s your chance to get one in like-new condition. Currently up for auction at BringATrailer, it shows less than 200 miles on the odometer and still has the original window sticker. As you can see, however, its body isn’t exactly showroom stock, which leads us to the bad news.

For the record, having a full carbon fiber body isn’t even remotely bad. This car was built by SpeedKore and yes, it has a full-body reskin with everything getting the carbon fiber treatment. According to SpeedKore, the result is a weight savings of 200 pounds over the standard Demon. Only five of these cars were built, and SpeedKore tells us this one was a development vehicle for creating carbon fiber bits later used on the Challenger Widebody.

So where’s the bad news here? In short, the word is price. Demons on the used market – when you see them – are already pricey. Given the extremely rare nature of this one with nearly new mileage and its connection to Challenger Widebody development, the odds of the final bid price going into the stratosphere are pretty darned good. A standard Demon recently popped up in Norway with 3,000 miles on the odometer and a modest price tag of approximately $287,000 USD. Granted, there are taxes and import fees involved there, but still, you get the idea.

Aside from the carbon fiber bodywork, this Demon is listed as factory stock. In a press release regarding the car (available at the Press Release link below) it’s mostly gone to car shows. There’s no claim that it’s never been raced, but with just 181 miles said to be on the odometer, it probably hasn’t made many quarter-mile sprints, if at all.

Bidding is already $50,000 with over seven days still to go as of this article going live on July 27. Any guesses as to what the final bid price will be when all is said and done?

First, SpeedKore produces a 3D digital model from a blue light scan of an entire Dodge Challenger Wide Body. Then, a five-axis CNC machine cuts the molds to create plugs and panels pulled using aerospace-grade prepreg carbon fiber. Prepreg is the industry term for fabric reinforcement pre-impregnated with resin, typically an epoxy. This resin is applied to the carbon fiber fabric with calibrated machinery, ensuring an exact resin-to-reinforcement ratio.

The molded carbon fiber body panels are then cured using SpeedKore’s massive in-house autoclave, which applies vacuum and elevated pressures resulting in excellent fiber consolidation and composite structural performance. The result is a unique hypercar-quality carbon fiber body with perfect carbon fiber weave alignment, and in the case of this demon, a 200lbs weight reduction over the stock vehicle.

Aside from the significant modifications to the car’s body, this 2018 Dodge Challenger SRT Demon is otherwise stock. It’s 6.2 liter supercharged Hemi V8 produces 840 horsepower and 770 pound-feet of torque, but it's far more than a Hellcat Hemi with more boost. Dodge massaged the blown 6.2 liter powerplant with 25 major component upgrades, chief among them a larger supercharger with displacement increased from 2.4 liters vs. 2.7 liters. Boost pressure is moreover increased from the Hellcat’s 11.6psi to 14.5psi, and redline increased from the Hellcat’s 6,200rpm to 6,500rpm. Further, Dodge added new, stronger pistons and rods, along with an upgraded valve train and fuel injection system.

The result is a world’s fastest production car 0-60 time of 2.1 seconds (with a 5ft rollout, or 2.3 seconds from a standing start). That number is partially afforded by the Demon’s quick-shifting ZF 8-speed automatic, fitted with the drag-race-bred TransBrake that locks the transmission output shaft to hold the car in place before a standing start. This allows for an engine speed of up to 2,350rpm without overpowering the brakes, resulting in quicker power delivery and increased torque on launch.

The Dodge Challenger SRT Demon is a limited-production street-legal drag car made even more special by its full carbon-fiber body from SpeedKore.This car has spent most of its life visiting local car shows and is looking for a new home to make room for new projects. It has very low mileage (181 miles) and is a perfect weekend cruiser or drag strip monster.