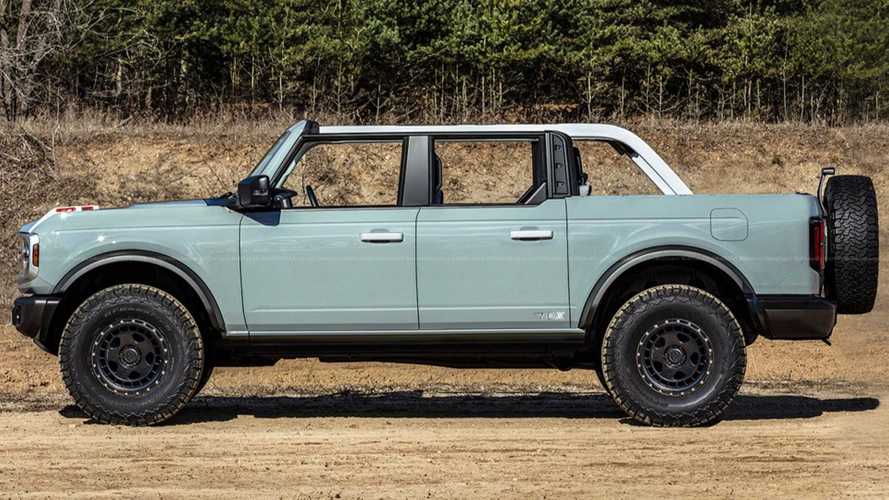 Due 2024, but Ford apparently wants to bring the launch date forward.

Following the return of the Ranger to the United States in 2018 and next year’s Maverick debut, it would seem Ford will up its truck game furthermore with a Bronco-based pickup. A new report from Automobile Magazine claims the off-roading SUV will gain a bed by mid-2024, which would make it a 2025MY.

While that’s a long way off, Blue Oval is keen on fast-tracking the model’s development and bring the launch date forward to as early as 2022. Best-case scenario, the Jeep Gladiator competitor will end up as a 2023MY, complete with all the off-road goodies of the SUV. Expect the GOAT drive modes, Sasquatch package, and just about the same wide variety of trim levels.

Much like Jeep is doing with the Wrangler-based Gladiator, Ford apparently wants to sell the Bronco truck exclusively with four doors, at a base price of approximately $30,000. A fully loaded limited-run First Edition in the same vein as the Bronco SUV’s immensely popular special version is planned, but it’ll cost you about double the entry-level model.

As far as engines are concerned, the bed-equipped Bronco is expected to feature the familiar 2.3-liter four-pot and 2.7-liter six-cylinder turbocharged gasoline units. The report goes on to mention the yet-to-be-confirmed Bronco Raptor’s 3.0-liter EcoBoost V6 won’t be coming to the pickup, but don’t fret as something even beefier is apparently on the agenda. Rumor has it a 5.0-liter V8 is earmarked for the flagship Bronco truck, although that remains to be seen.

Gearboxes will include the usual suspects, namely the seven-speed manual and 10-speed automatic. If a V8-powered Bronco pickup is indeed on the agenda, it’ll likely come exclusively with a two-pedal setup.

A Bronco truck would be an interesting decision taken by Ford taking into account there’s a risk it might cannibalize sales of the Ranger. The latter is expected to switch to a new generation as early as next year and get a US-bound Raptor derivative powered by a 325-horsepower 2.7-liter V6, but nothing is official at this point.