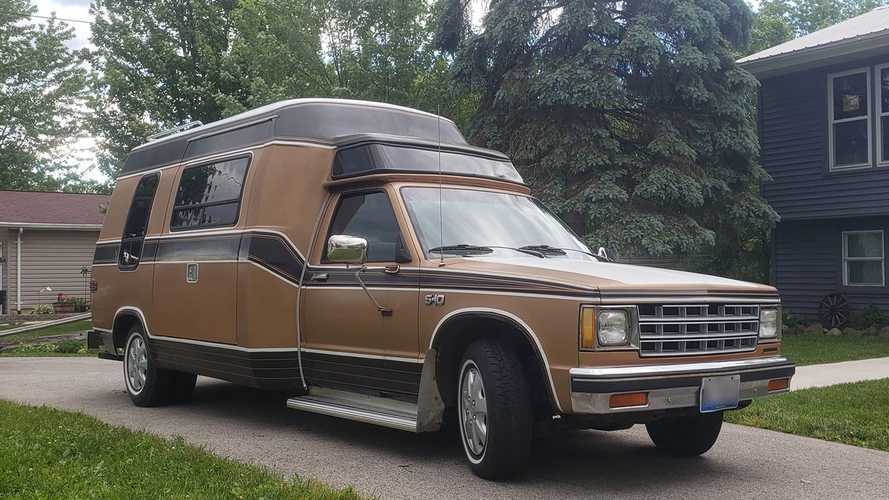 If you’re a regular Motor1.com reader, you know we love obscure motorhomes and campers built from unlikely source vehicles. The first-generation Chevrolet S-10 is neither large nor powerful, but this fusion of truck with a fiberglass van backside is just too good to pass up. And if you have $4,800, you can put it in your garage.

We found this early 1980’s gem on Facebook Marketplace, located in Union Grove, Wisconsin. It’s a 1984 S-10, finished in a proper period-correct shade of gold with brown stripes. Under the hood sits a 2.8-liter V6, which was rated at 115 horsepower (86 kilowatts) and 150 pound-feet (203 Newton-meters) of torque when new. Vehicle mileage isn’t mentioned in the post, but a close-up photo of the dash sent to us courtesy of the seller shows 98,996 miles on the five-digit odometer.

Little is known about the conversion. According to the post, this is allegedly one of just five S-10 campers built by a company called New World Editions, Inc. The S-10’s wheelbase is stretched to accommodate the bulky backside, and it rides on a set of dual rear wheels. The Facebook post calls this a fiberglass topper, but there’s no mistaking the design as that of a full-size conversion van. Whether an actual van was grafted to the Chevy or a van-like shell was created from scratch is unclear. The rig was acquired from an estate sale in 1987, so this project was completed a long time ago.

In any case, this custom S-10 van is said to be in good overall condition, but there are some issues. A brake line recently popped, and the transmission reportedly has a noticeable clunk when downshifting below 10 mph. There’s also some rust in typical S-10 problem areas, especially on the fenders, the interior has a few rips and shows “some signs of rodents,” and it needs new tires. The air conditioning was recently repaired however, so driver and passengers will stay nice and cool.

It’s certainly a unique machine, if one that needs a little help. The interior is set up like a typical conversion van but it could be a great starting point for someone wanting to build a legit camper with lots of 1980s nostalgia.

The complete for-sale post is available at the source link below.