It can sleep two.

Campers and camper vans come in all shapes and sizes. They can range from a quirky converted VW Beetle to a massive Mercedes Unimog, though it’s doubtful we’ve ever seen a converted Nissan Versa. That’s what Joey White did when he made the cross-country move from Florida to California to be closer to his girlfriend. When he arrived, he had trouble finding housing, so he decided to convert his Versa.

The small space required some ingenuity. There’s technically seating for two – the front passenger seat is gone, replaced by a dinette table. Someone can sit sideways in the driver’s seat while the other person sits in the rear passenger seat. There’s storage underneath the table along with the access panel to the car’s new fuse box, which runs the internal electronics.

Jucy RV For $11,000 Has Small In Size, Big In Personality
⠀ Old School Bus Gets New Life As Cozy RV With Room To Spare

Behind the driver is the kitchen area. There’s a small sink with running water that drains to a gray water tank below. There’s also a tiny cabinet pantry for snacks along with USB charging ports that are spread throughout the interior. A mini trash can next to the sink, both of which were made to have a low profile.

The rear hatch is used for additional storage where clothes, shoes, and other gear are stored. It’s also where the bedding is kept. The bed deploys when the rear passenger seat is folded down, which then creates a flat, six-and-a-half-foot bed. An air mattress and sleeping bag complete the bedroom feel, along with black-out shades that are hung via magnets. There’s enough roof to sleep two. 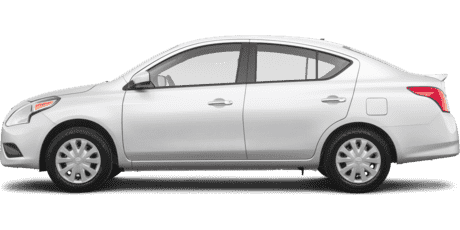 The Versa, a 2007 model with nearly 180,000 miles, bare-bones as one can get. No cruise control, no auxiliary input, and no Bluetooth. CDs are the jukebox of choice. There are other creature comforts like an adjustable desk lamp that’s attached to the B-pillar – right above additional USB ports. Converting a Versa into a tiny camper isn’t the height of luxury – it lacks any bathroom facilities – but it does offer a decent amount of storage and a warm bed.