Lamborghini SCV12 Unveiled With Brand's Most Powerful V12 Engine Ever 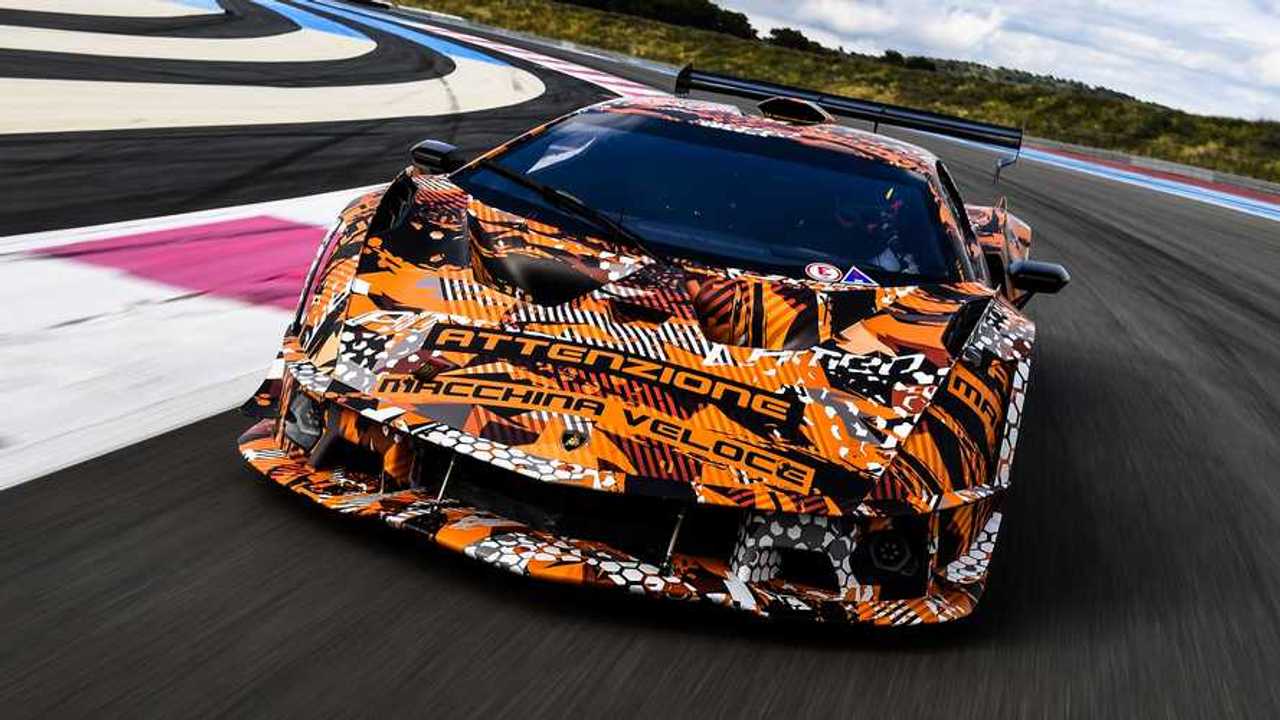 Full tech details should be released later this summer.

Lamborghini may be done with attending major auto shows but that doesn’t mean the Sant’Agata Bolognese-based supercar maker doesn’t have new products on the agenda. To everyone’s surprise, the brand has just (almost) unveiled the SCV12, which features the most powerful naturally aspirated V12 engine in the company’s entire history.

The Lamborghini Squadra Corse is a limited-edition track-only supercar that has been developed in cooperation with the company’s motorsport division. The machine is now ready to hit the track but will be revealed in full later this summer. All we have for now are first tech details and a photo session with a camouflaged prototype.

The SCV12 is not a race car per se but benefits from Lamborghini’s GT expertise and even has a higher downforce and aerodynamic ratings than a GT3 car. The long hood plays a major part in the equation thanks to its double air intake and a central rib directing airflow to the air intake scoop located on the roof. In addition, the prominent splitter at the front together with the vertical fins on the side sills give the supercar a true race car appearance.

As we already mentioned, under the hood is an in-house developed naturally aspirated V12 engine, which Lamborghini says is “capable of exceeding 830 hp thanks to aerodynamic supercharging at high speed.” The exact weight of the car hasn’t been announced at the moment but Lambo says that the chassis is made of carbon fiber for an impressive power-to-weight ratio.

The V12 is mated to a sequential six-speed gearbox with a pushrod rear suspension system attached directly to it. Power is channeled to the rear wheels and delivered on the track with the help of specially developed Pirelli tires fitted on 19- and 20-inch (front and back) magnesium alloys.

No pricing details are available at the moment but Lamborghini says each customer will get access to a “very exclusive club” and will participate in different driving programs around the globe. The SCV12 will be assembled at home in Sant’Agata Bolognese. More information is expected later this summer so stay tuned.

Sant’Agata Bolognese, 23 June 2020 – Lamborghini Squadra Corse’s track-only hypercar, the
Lamborghini SCV12, has completed its development programme and is now ready to hit the track
for its world première, scheduled for summer 2020.
Fitted with the most powerful V12 naturally aspirated engine from Lamborghini to date, the SCV12
– designed by the in-house Lamborghini Centro Stile – is capable of exceeding 830 hp thanks to
aerodynamic supercharging at high speed.
The SCV12 benefits from Lamborghini Squadra Corse’s GT motorsport expertise, using its racing
experience to produce increased aerodynamic efficiency and higher downforce levels than a GT3
car. The SCV12’s front bonnet has a double air intake and a central rib directing airflow to the ram-
air intake scoop located on the roof. This directs dynamic air pressure created by the car’s
movement to increase static air pressure in the engine’s intake manifold, creating greater airflow
through the engine and increasing power. The car’s clear track intent and aerodynamic efficiency is
further enhanced by the prominent splitter at the front, lateral flicks and vertical fins on the side
sills, while at the rear is a custom-built carbon fibre rear wing.
Several aspects of the SCV12 have been developed particularly for the hypercar, with specific
racing solutions devised by Squadra Corse engineers, including a new fully carbon fibre chassis
that allows for a greater power-to-weight ratio as well as the best handling and circuit driving
experience.
The lightweight chassis with rear-wheel drive incorporates a sequential six-speed gearbox as a
structural element within the chassis, reducing weight and enhancing weight distribution. Pushrod
rear suspension is system installed directly on the gearbox, while power is delivered on the track
courtesy of specially developed slick Pirelli tyres fitted on magnesium rims (19” front, 20” rear).
The SCV12 will be assembled entirely within the Lamborghini Squadra Corse factory in Sant’Agata
Bolognese, as a limited edition. Customers will become members of a very exclusive club: they will
participate in advanced driving programmes at some of the world’s most prestigious circuits, with
the technical assistance of Squadra Corse engineers and the special tutoring of Emanuele Pirro,
five-time winner of the 24 Hours of Le Mans and Lamborghini Squadra Corse Special Projects
Consultant.