It's a tourist's car, but BMW has built a couple of 3 Series pickups in the past.

Sacrilegious? Maybe. Interesting? Certainly. BMW sold the 3 Series during the E46 era in multiple body styles, but a pickup wasn’t one of them. You had the typical sedan and wagon, joined by the coupe and convertible as the two-door models were still part of the 3er family back then. The fifth member of the lineup was the unloved three-door 3 Series Compact.

None of these versions were good enough for the owner of this car as he wanted something more practical. Spotted by Auto Addiction during a rainy Tourist Day at the Nürburgring, this E46 was seen flaunting its unusual pickup truck conversion and quad exhaust tips. Details about the vehicle’s history are shrouded in mystery, but whoever built it decided to go with a single cab configuration as the rear seats were removed.

This interesting contraption looks like something BMW would build as a one-off project in the same vein as the E30 and E92 M3 pickups from yesteryear. The Bavarians do like to dip their toes in the truck pool once in a wheel, with the most recent example being an X7-based pickup with a bed big enough to carry one of the company’s motorcycles.

We’d be interested in knowing more about this peculiar BMW since it looks like a lot of effort was put into making it. It appears to have started out in life as a coupe before going through a series of modifications, such as making a cutout in the rear panel behind the seats to fit a window. We’re getting the feeling the tailgate actually opens to provide better access to the bed and load tall items you wouldn’t normally be able to put inside a 3 Series Touring.

BMW says they will never make a pickup truck 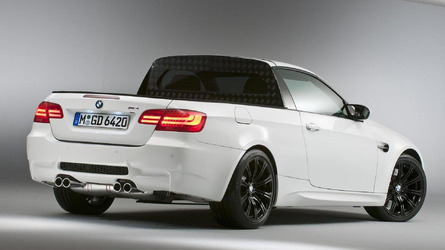 BMW isn't saying no to a pickup truck

The makeshift truck wasn’t the only interesting appearance that day at the Nordschleife as towards the end of the video you can check out an old-school Mercedes G-Class. Seen at the 10:28 mark, the reputable off-roader featuring a raised roof and split rear doors must have been the slowest car that day.