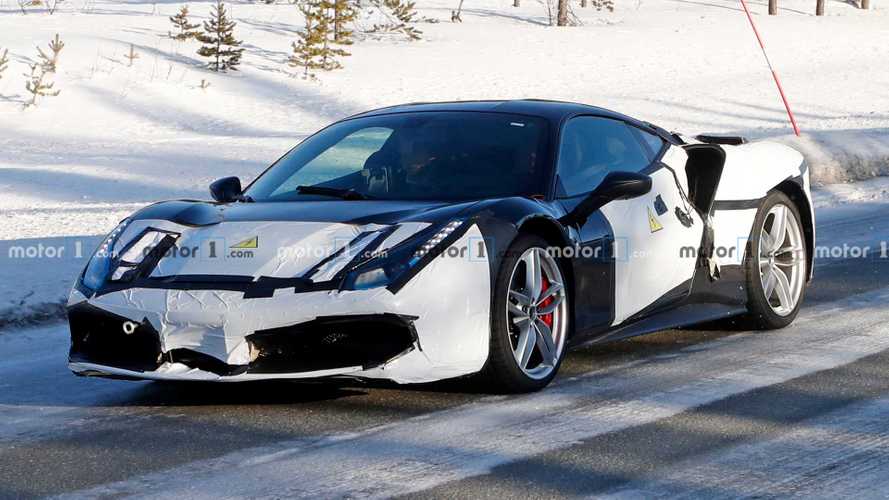 A new hybrid could slot below the SF90 Stradale.

The idea of a hybrid-powered Ferrari may break the brain, but the Italian automaker made a compelling case for such a combination in 2013 with the Ferrari LaFerrari. Fast-forward to last May, and Ferrari introduced the SF90 Stradale – a 986-horsepower (735-kilowatt) hybrid supercar. Hybrids now have a home at Ferrari, and it looks like the development of a new hybrid model is well underway. Spy photos of a partially camouflaged Ferrari 488 with high-voltage stickers hint that a new hybrid Ferrari is coming.

There’s not much to see, sadly, other than the high-voltage stickers, uneven all-white camouflage, and the black Ferrari 488 underneath it all. This could be an early test vehicle where new components are hidden underneath familiar sheet metal, long before engineers and designers have finalized the design. It could also be a new hybrid model that slots below the SF90 in Ferrari’s lineup or hint at a hybrid version of the 488. The test vehicle raises more questions than it answers.

Ferrari Stallone Concept Is A Gorgeous Take On LaFerrari Successor

It’s also not clear if it’s a V8 or a V6 providing power. Ferrari has laid the groundwork for a stable of hybrids. Back in 2018, Ferrari announced its two new architectures would both be capable of hybrid powertrains. Ferrari also divulged plans for a hybridized V6 engine, though specifics weren’t given at the time. There’s also the Ferrari Purosangue SUV that’ll launch next year and include a hybrid powertrain.

But, until Ferrari spills the beans, we can only speculate about the strange test vehicle covered in high-voltage stickers. It certainly hints at Ferrari getting a new hybrid model, but it’s too early to confirm anything. Ferrari did say that 2020 would be a quieter year for the automaker, which had five big reveals in 2019. Ferrari is only a third through its plan to launch 15 new models in five years. With 10 new Ferraris still coming, any number of them could use a hybrid powertrain.