If our anonymous source is accurate, here’s a sneak peek of the so-called Baby Bronco before Ford wants you to see it. Rather, this is sort-of a preview – the photo was tipped to us by a Motor1.com reader who shall remain comfortably unknown. That’s because this photo allegedly comes from within a location where bare bodies of the smaller Bronco are clearly visible. A Ford spokesperson declined to comment on “whatever future product that may be” so in short, take this photo for what you see.

What we see are lines that clearly resemble previous spy shots and leaked images of the small crossover, possibly called Bronco Sport or Bronco Adventurer. The giveaway for us is the kink in the C-pillar, which perfectly matches what we’ve seen in spy shots. 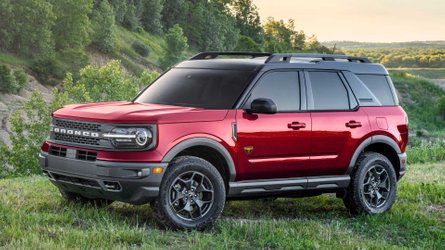 We can also easily see the unibody design under this bare body – shared with the Ford Escape – whereas the larger Bronco is expected to be a body-on-frame offering. The vent at the base of the front fender where it meets the door is another dead giveaway.

We don’t have any new details about the forthcoming crossover or when it might appear. Clearly its boxy shape is a stark contrast to the rounded Escape, though we expect it to offer similar powertrain options. That means either a 1.5-liter turbocharged three-cylinder making 180 horsepower (134 kilowatts) or a 2.0-liter turbo-four developing 250 hp (186 kW). Front-wheel drive is offered on the Escape, though all-wheel drive is optional. Whether Ford will include a front-wheel-drive option for its more rugged crossover is something that remains to be seen.

Speaking of which, Ford confirmed it had no plans for a Bronco reveal at the Los Angeles Auto Show in late November, so we’re back to our original timeframe of seeing it revealed early in 2020. The new Ford F-150 should then arrive later next year, with the big Bronco finally taking center stage in early 2021.