All show without any extra go.

Ford is marking the 55th anniversary of the Mustang with a special edition model exclusively for the European market. The Mustang55 is based on the Mustang GT with a 5.0-liter V8 engine and features visual enhancements including hood and side-stripes, special badging, and optional rear spoiler. The coupe models will come with roofs painted in black, complementing the gloss-black 19-inch wheels and black grilles in the front bumper. Speaking of the grilles, the upper one incorporates a new Pillar Black pony badge.

Interior upgrades include carbon-fiber dashboard trim and leather-wrapped center console and knee bolster with grey stitching, also seen in the floor mats. If you order the Mustang55 with a six-speed manual gearbox, Ford will install a unique molded gear-shift knob, and if you go for the 10-speed auto you’ll get a unique alloy metal gear-shift knob. The seats and door trims on all Mustang55 models are finished in Alcantara. The special series will be available as both a coupe (that Ford calls fastback) and a convertible. 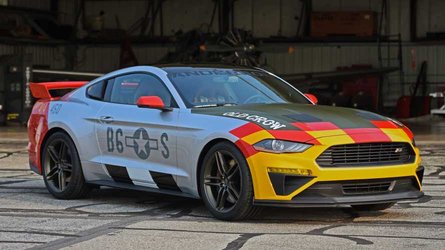 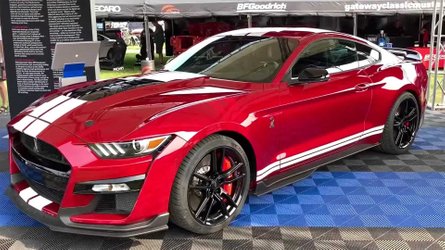 In addition, European customers can also opt for a Mustang with a 2.3-liter EcoBoost engine that’s not part of the celebration series. However, it also gets improvements such as door mirrors and boor spoiler inspired by the Mustang Shelby models, as well as hood stripes a new radiator grille. More importantly, the Active Valve Performance Exhaust system is now part of the standard equipment for the model, automatically limiting the exhaust’s noise output at pre-programmed times of the day to avoid disturbing neighbors.

Ford says it will continue to offer the Mustang Bullitt to European customers for a second consecutive year, which will be available alongside the improved 2.3-liter model and the new Mustang55. Through the first six months of 2019, the Blue Oval has delivered more than 5,500 Mustangs on the Old Continent, representing an increase of more than five percent.

Based on the 450 PS Ford Mustang 5.0-litre V8, the new Mustang55 features unique exterior styling including distinctive bonnet and side-stripes, badging, and optional rear spoiler, alongside a high-specification interior.

In addition, the Ford Mustang 2.3-litre EcoBoost now delivers styling upgrades inspired by the legendary Mustang Shelby models, and features as standard Ford’s Active Valve Performance Exhaust that enables drivers to adjust the intensity of the Mustang’s exhaust note to suit their mood and the driving scenario.

New Mustang colours introduced across the range include Iconic Silver, Lucid Red, Twister Orange and Grabber Lime, and FordPass Connect on-board modem technology turns Mustang into a mobile WiFi hotspot with connectivity for up to 10 devices.

“Mustang is one of an exclusive group of vehicles to achieve more than half a century of continuous production, and customers’ appetites for the world’s best-selling sports car show no sign of waning,” said Roelant de Waard, vice president, Marketing Sales & Service, Ford of Europe. “Our new Mustang55 is the essence of Mustang, combining exciting performance, bold design, and comfort-enhancing technologies like our FordPass Connect on-board modem and B&O Sound System.”

Mustang earlier this year celebrated 55 years since its introduction on April 17, 1964, and in 2018 was the world’s best-selling sports coupe for the fourth consecutive year. The new Ford Mustang55 5.0-litre V8 and enhanced Ford Mustang 2.3-litre EcoBoost are available to order from August.

A high specification Mustang55 interior enhances the occupant experience with carbon fibre-effect dashboard inserts, and a leather-wrapped centre console and knee bolster with distinctive grey stitching that is replicated in the premium floor mats.

Ford Mustang Shelby models including the Mustang Shelby GT350 and GT500 models have delivered enhanced performance and unique styling for Mustang customers for more than 50 years, and now also inspire enhancements for the Mustang 2.3-litre EcoBoost fastback and convertible models.

Mustang remained the world’s best-selling sports coupe for the fourth consecutive year in 2018, selling 113,066 cars, according to data from IHS Markit. Ford sold 5,500 Mustangs in Europe in the first half of 2019, an increase of more than 5 per cent compared with the same period last year.** More than 500,000 sixth-generation Mustangs have been sold worldwide since 2015, including more than 48,000 in Europe.