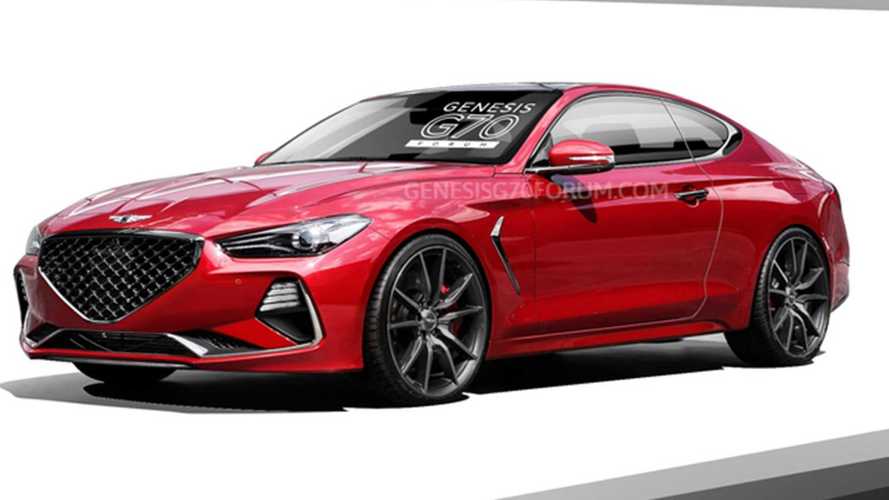 A Genesis coupe might actually join the range at some point.

The Genesis brand is still growing, and a rendering from the Genesis G70 Forum imagines how the sedan might look if the luxury automaker ever decides that it wants to add a coupe to the range. The tweaks make for a handsome two-door.

In addition to slicing off two doors, the artist here gives the G70 Coupe the pointy grille like the G90. The roofline is also slightly different by gaining a more acute arch since rear passenger headroom is less of a concern, and the change makes the rear more attractive.

There are reasons to suspect that a G70 Coupe isn't too farfetched to join the lineup eventually. In 2015, execs said that the Genesis lineup would eventually include a "sports type coupe," and a leaked product roadmap in 2016 showed a "near luxury sport coupe" coming in 2020. A promo video in 2017 also briefly showed a clay model that was possibly the two-door.

The Genesis G70 might have a performance variant eventually that would sit above the existing top model with a 3.3-liter, 365-horsepower (272-kilowatt) twin-turbo V6. This would give the brand a natural competitor against the likes of the BMW M3 and other performance sedans. Creating a coupe with this powertrain would then make an M4 challenger.

A very different Genesis coupe might debut at the upcoming New York Auto Show. Luc Donckerwolke, head of Hyundai Group design, confirms that an electric concept is arriving there. We don't have any official details yet, but speculation suggests that it could be a new version of the Essentia concept EV. The current one is an electric supercar capable of hitting 60 miles per hour (96 kilometers per hour in about three seconds.