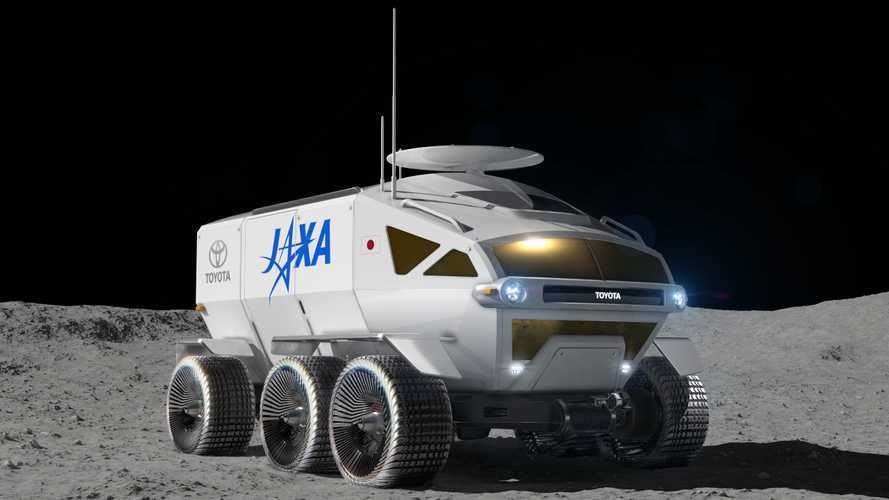 Toyota will work with the Japanese space agency JAXA to produce a pressurized lunar rover.

Is there anything Toyota can't do? They don't seem to think so. In fact, it appears that the Supra might not be the most exciting news to come from the Japanese manufacturer this month.

The Deal Is Official:

Toyota has come to an agreement with the Japan Aerospace Exploration Agency (JAXA) to begin research & development into a new moon rover. The manned, pressurized craft, which wears an FJ Crusier-esque grille in the concept renderings, looks like something off the cover illustration of a pulp science-fiction paperback. Toyota aims to make their concept into science fact.

The payload of any spacecraft that would be transporting this rover to the moon would be understandably limited. After all, it takes a lot of thrust to leave the Earth's atmosphere and launch into space, so every pound counts. Toyota thinks that by utilizing fuel cell technology, they'll be able to create a rover with a range of over 10,000 kilometers, which is nearly enough to drive around the moon's equatorial circumference (10,916 kilometers, in case you were wondering).

The proposed rover will be roughly equivalent in size to a pair of small buses or motorcoaches, and will measure six meters in length. Interior volume will be 13 cubic meters, capable of housing two astronauts (four in an emergency).

This wouldn't be the first time that the automotive industry has looked to the Moon. The original lunar rover, developed in the 1960s, had wire-mesh wheels designed by Goodyear.

As a first step, JAXA and Toyota have reached agreement to further co-operate on and accelerate their ongoing joint study1 of a manned, pressurised rover2 that employs fuel cell electric vehicle technologies. Such a form of mobility is deemed necessary for human exploration activities on the surface of the moon. Even with the limited amount of energy that can be transported to the moon, the pressurised rover would have a total lunar surface cruising range of more than 10,000km.

International space exploration, aiming to achieve sustainable prosperity for humankind by expanding the domain of human activity and giving rise to intellectual properties, has its sights set on the moon and Mars. To achieve these exploration goals, it is essential to have co-ordination between robotic missions, such as the recent successful touchdown by the Hayabusa2 probe on the asteroid Ryugu, and human missions, such as those using pressurised rovers for activities on the moon. When it comes to challenging missions, such as lunar or Martian exploration, various countries are competing in advancing their technologies, and also their co-operative efforts.

Toyota President Akio Toyoda said: “The automotive industry has long done business with concepts of ‘hometown’ and ‘home country’ largely in mind. However, from now on, in responding to such matters as environmental issues of global scale, the concept of ‘home planet’ from which all of us come will become a very important concept.

“Going beyond the frameworks of countries or regions, I believe that our industry, which is constantly thinking about the role it should fulfil, shares the same aspirations as international space exploration. Furthermore, cars are used in all of Earth’s regions; and in some regions, cars play active roles as partners for making sure that people come back alive. And I think that coming back alive is exactly what is needed in this project. I am extremely happy that, for this project, expectations have been placed on the thus-far developed durability and driving performance of Toyota vehicles and on our fuel cell environmental technologies.”

At a symposium held today in Tokyo, JAXA Vice President Koichi Wakata and Toyota Executive Vice President Shigeki Terashi held a talk session, excerpts from which are given below.

1 A conceptual study for a manned, pressurised rover, jointly pursued by Toyota and JAXA since May 2018, based on a co-operation agreement.

2 As envisioned in this project, a vehicle that has an enclosed body equipped with functions and space that enable astronauts to life in the vehicle for fixed periods without wearing spacesuits, that allows ingress and egress while wearing spacesuits, and that makes sustainable mobility on the surface of a moon or planet possible by way of astronaut operation, remote operation or autonomous driving.

“At JAXA, we are studying various scenarios as well as technologies that will be applied to specific space missions. Manned, pressurised rovers will be an important element supporting human lunar exploration, which we envision will take place in the 2030s. We aim at launching such a rover into space in 2029.

“Lunar gravity is one-sixth of that on Earth. The moon has a complex terrain with craters, cliffs, and hills. Moreover, it is exposed to radiation and temperature conditions that are much harsher than those on Earth, as well as an ultra-high vacuum environment. For wide-ranging human exploration of the moon, a pressurised rover that can travel more than 10,000km in such environments is a necessity. Toyota’s ‘space mobility’ concept meets such mission requirements. Toyota and JAXA have been jointly studying the concept of a manned, pressurised rover since May 2018.

“Thus far, our joint study, has examined a preliminary concept for a manned, pressurised rover system, and we have identified the technological issues that have to be solved. Going forward, we want to use Toyota’s and JAXA’s technologies, human resources, and knowledge, among others, to solve those issues.

“International space exploration is a challenge to conquer the unknown. To take up such a challenge, we believe it is important to gather our country’s technological capabilities and engage as ‘Team Japan’. Through our collaboration with Toyota as the starting point, we can further expand the resources of ‘Team Japan’ in the continued pursuit of international space exploration.”

“Fuel cells, which use clean power-generation methods, emit only water, and, because of their high energy density, can provide a lot of energy, making them especially suited for the project being discussed with JAXA.

“Fuel cell electric vehicles have the ability to emit reduced amounts of harmful substances, such as particulate matter, that are found in the air they take in. As such, they are characterised by having so-called ‘minus emissions’3. We want to further improve on this characteristic.

“Our joint studies with JAXA are a part of this effort. Being allowed to be a member of ‘Team Japan’, we would like to take up the challenge of space.”

3 Fuel cell electric vehicles reduce particulate matter in the air they take in by way of a filter and supply the resulting cleaner air to their fuel cell batteries, emitting only water and surplus air.