"But while the CX-30 slots in nicely between the CX-3 and CX-5 in most dimensions, Mazda gave it a distinctive name because it’s an all-new vehicle with features not yet available on others in the lineup and the first of the CX models to adapt the new Kodo design."

"Whether future CX models will follow that naming philosophy in their reveals, we’ll have to wait and see." 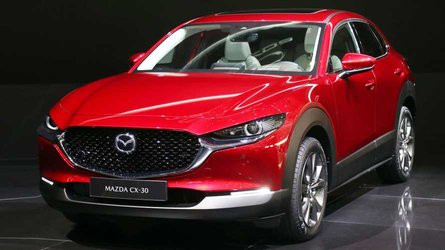 If you think the Mazda CX-30's name is odd, you're not alone. In the current era, all of the brand's crossovers use a three-character moniker, including the CX-3, CX-5, CX-9, and even the defunct CX-7. Why change things now? The reason gets more confusing the longer you think about it.

In terms of size, the 173-inch-long CX-30 sits right in the middle of the 179.1-inch CX-5 and 168.3-inch CX-3. Therefore, the CX-4 moniker seems like the natural fit for the new model. However, Mazda doesn't see things this way because there's already a CX-4 crossover that's available exclusively in China. In a discussion with Car and Driver, a Mazda spokesperson decided to avoid the potential confusion of having two completely different models with the same name in separate regions. Therefore, the automaker decided to create a new moniker.

From a corporate perspective, the decision is somewhat understandable because colleagues might confuse the model they are discussing if one of them mentions the CX-4. Does the person mean the one in China or the one everywhere else?

However, other automakers figure this problem out. The current Volkswagen Passat available in the United States rides on a completely different platform as the one available in Europe. They might as well be two separate vehicles, apart from the name. Even in the past, Honda would build one version of the Civic and Accord for Europe and separate ones for America.

The argument doesn't really work from a consumer perspective either. The current CX-4 is exclusive to China, so the chances are practically nil of someone in the U.S or Europe seeing one on the road, wanting to buy it, and then being confused about why another model has the same name.

As Shakespeare wrote: "A rose by any other name would smell as sweet," and regardless of the name, the CX-30 looks on paper to be a compelling entry in the stylish compact crossover realm. The crossover may arrive in the U.S. before the end of the year.