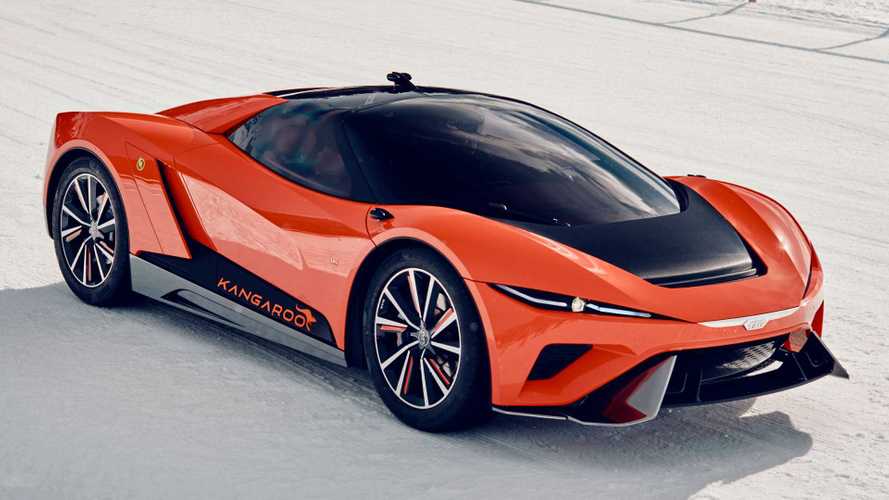 It was at the 2013 Geneva Motor Show where Italdesign Giugiaro introduced the interesting Parcour – a supercar powered by the Lamborghini Gallardo’s engine, but with the ground clearance you’d usually expect from a lifted wagon or a crossover. The coupe and roadster concepts were applauded for their unusual configuration, but ultimately never saw the light of day as production models.

Why are we bringing this up? Because Giorgetto Giugiaro and his son Fabrizio are the founders of GFG Style and for this year’s Geneva show they have prepared something similar in philosophy. Attempting to combine the performance of a supercar with the utility of vehicles featuring a generous ground clearance, the Kangaroo is a futuristic jacked-up EV with all-wheel drive and all-wheel steering.

Its sleek bodywork is made entirely out of carbon fiber to keep the weight in check, while the trick adjustable suspension has three selectable modes: Racing (ground clearance of 140 mm / 5.5 inches), Road (190 mm / 7.5 inches), and Off-Road (260 mm / 10.2 inches) for when the going gets tough. Those massive 22-inch alloy wheels might not seem off-roading material, but the ability to considerably raise the body enables the Kangaroo to tackle difficult terrain.

The 90-kWh battery pack has enough juice for more than 280 miles (450 kilometers), although it’s unclear on which fuel consumption testing procedure. Power is provided by a pair of electric motors each developing 180 kW, so combined output stands at the equivalent of 483 horsepower (360 kW).

This was GFG Style's concept in Geneva last year:

What you see here is more than just a pretty face as the car has already evolved to a running prototype based on an electric platform developed in partnership with CH Auto. The “Hyper SUV” as described by its creators promises to do 0-62 mph (0-100 kph) in only 3.8 seconds and top out at an electronically governed 155 mph (250 kph).

Aside from showcasing the running prototype, GFG Style will also have on display at the Geneva Motor Show a clay model with the roof and hood in exposed carbon. In addition, the Kangaroo is going to ditch the wheels and tires to make room for tracks as the people behind the car believe it would be a hoot to use on icy and snowy roads.