Panamera TechArt Grand GT Might Just Be The Ultimate Wagon

And it can run on full electric mode, too.

When Porsche launched the Panamera Turbo S E-Hybrid Sport Turismo in 2017, I immediately thought that it's the ultimate wagon. Armed with great looks and even greater performance figures, it immediately outshined the Mercedes-AMG E 63 S Wagon and the Audi RS 6 Avant Performance, especially with the Panamera's 671-horsepower electronically-assisted power.

But DJ La Fuente, a Dutch disc jockey who has quite a taste in cars, thinks otherwise. He wanted more. He thought that the Panamera Sport Turismo wasn't exclusive enough. So he contacted Porsche tuning experts, TechArt to make him his Grand GT.

With just a glance, you'll immediately notice that La Fuente's Grand GT isn't any ordinary Porsche. The blacked-out color theme and widened body is a dead giveaway, but wait until you see the interiors. The low-resolution images above don't do justice to the car; you have to watch the video above by Shmee.

La Fuente is a man who loves to drive his cars. When Shmee asked when did he receive his Grand GT, he said that he ordered the car by April 2018 but since he had it done by TechArt first, he only got his Grand GT two to three months ago. Surprisingly, with only a few months to his possession, his car has already done 20,000 kilometers (12,427 miles). 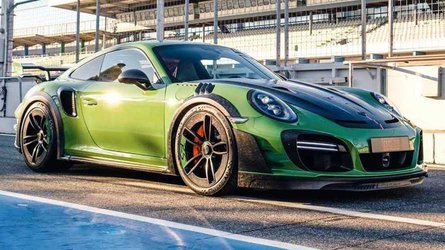 The car-loving DJ said that his Grand GT is currently rated at 680 horsepower, but TechArt is updating it to 770 soon through the German tuner's power upgrade. Although, we don't think La Fuente is going to stop there.

Even better, with all the body kits and custom exhausts installed on La Fuente's Grand GT, it can still run on full electric mode. That's pretty nifty.