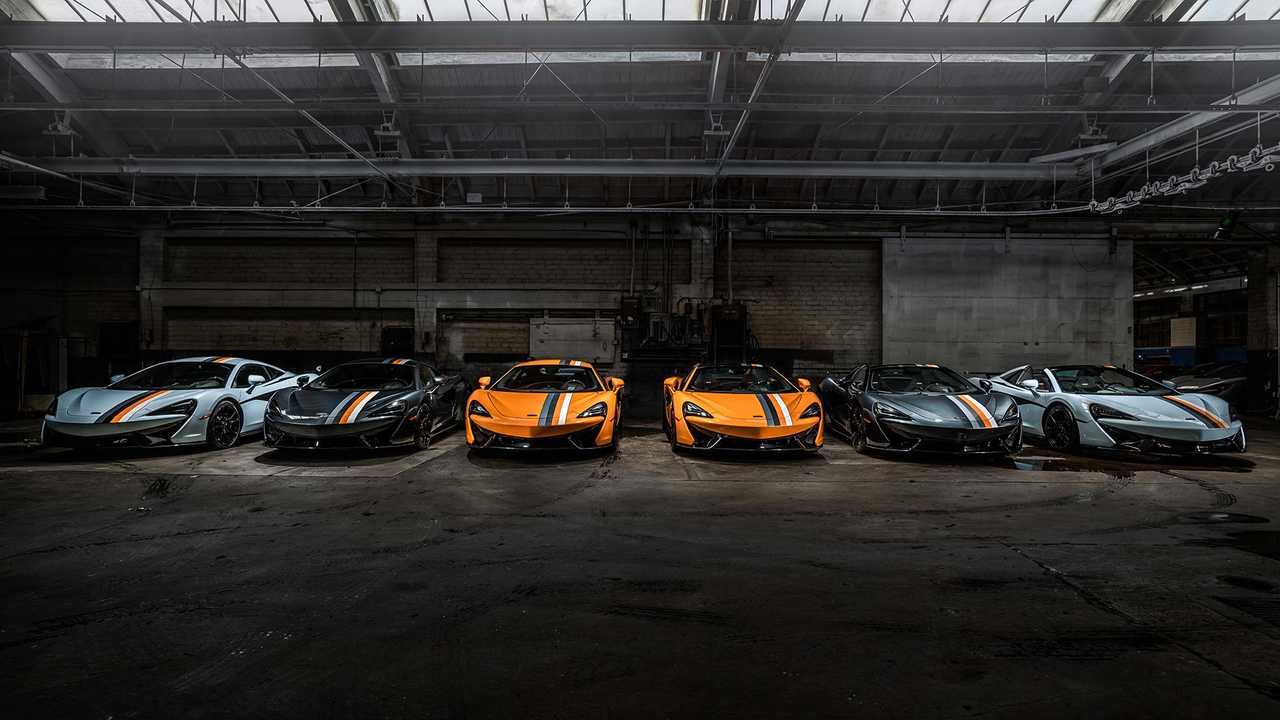 The six examples of the 570s reference the brand's beginning, early success, and later victories.

McLaren's MSO customization division launches the new Racing Through the Ages Collection as a way to celebrate the brand's past. Comprising three 570S coupes and a trio of 570S Spiders, the sextet of retro-inspired models are exclusively available from McLaren Beverly Hills, which is on track to be company's top-selling dealer in the world for 2018.

Each pair of Racing Through the Ages Collection models are available as a coupe or convertible. All of them feature MSO's fixed rear wing, 10-spoke wheels with a gloss black finish, and a titanium exhaust. For extra style, a GT4-inspired, asymmetrical racing stripe adorns the hood and roof. On the inside, the stripe also appears on the seat backrests, and there's an MSO logo on the headrest. The steering wheel features an orange accent at the 12 o’clock position. A Racing Through the Ages plaque is also in the cabin, and each car comes with a key in a color that matches the exterior.

MSO paints a pair of 570 models in Muriwai White, and the color references Bruce McLaren's start in racing in New Zealand. The shade has a vaguely blue hue that the customization team takes inspiration from "the white/blue waves crashing on Muriwai Beach, New Zealand, where Bruce McLaren competed in his first race." An orange kiwi bird also appears on the rear wing's endplates.

Another two sports cars wear McLaren's trademark Papaya Spark orange paint, and these vehicles pay tribute to the company's racing success in the 60s and 70s with many machines in this eye-catching color. The rear wing is Burton Blue but with Papaya Spark endplates.

Fan of a darker look can pick from the coupe and convertible in Sarthe Grey. This shade pays tribute to the McLaren F1 GTR winning at the 24 Hours of Le Mans in 1995. The wing endplate has white lettering declaring "24 Heures Du Mans – Winners 1995.”

The collection, which commemorates McLaren’s racing heritage, features three distinct themes: Muriwai, which celebrates Bruce McLaren’s early racing exploits in New Zealand; Papaya Spark, which honours victories in orange throughout the 1960s and 70s and its continued use on modern Formula One cars; and lastly, Sarthe Grey, inspired by McLaren’s dominant Le Mans victory in 1995, the only time a manufacturer has won Le Mans on its debut.

Each theme is represented by both a 570S Coupe and 570S Spider, for a total of six cars in the collection. All six cars are fitted with a special MSO designed, dealer fit rear wing and feature a GT4 racing stripe on the exterior hood and roof, complimented by the MSO Defined Black Pack, 10-Spoke Super-Lightweight Forged Wheels in Gloss Black and MSO Defined Titanium SuperSports Exhaust.

The interiors feature the GT4 stripe integrated into the backrest of the seat and the MSO logo stitched into the headrest, as well as a McLaren Orange 12 o’clock mark on the steering wheel. Each car also features a dedication plate stating “1 of 6 – RACING THROUGH THE AGES” and comes with a key finished to match the paint on the car.

The Muriwai theme is represented by MSO Defined Muriwai White exterior paint, a colour inspired by the white/blue waves crashing on Muriwai Beach, New Zealand, where Bruce McLaren competed in his first race at the age of 15. Muriwai was also the name of the house he later built in Woking, which he painted white with blue shutters. The color extends to the endplates of the fixed rear wing, which also features the “Speedy Kiwi” logo in McLaren Orange.

The Papaya Spark theme is represented by MSO Defined Papaya Spark exterior paint, which is an evolution of the papaya colour Bruce McLaren chose for his racing cars in the 1960s and 1970s. Major successes across Can-Am, Indy500 and Formula One were achieved with cars wearing this colour. The fixed wing is finished in Burton Blue with Papaya Spark endplates, paying honour to the iconic blue spoiler featured on the original racing cars.

“It’s exciting for us at MSO any time we are able to merge McLaren’s racing heritage with current McLaren Automotive road cars,” said Ansar Ali, Managing Director, McLaren Special Operations. “Working alongside our retailers such as McLaren Beverly Hills to create these distinctive, limited editions of special cars for McLaren customers is an increasingly important part of our business as the demand for bespoke commissions becomes more popular.”

Such commissions have helped McLaren Beverly Hills be on track to become the number one retailer in the world in 2018 for McLaren Special Operations.

A selection of high resolution images accompanying this release is available to download from the McLaren Automotive media site – cars.mclaren.press

McLaren Automotive is a creator of luxury, high-performance sportscars and supercars. Every vehicle is hand-assembled at the McLaren Production Centre (MPC) in Woking, Surrey, England. Launched in 2010, the company is now the largest part of the McLaren Group. The company has three defined product families: Sports Series, Super Series and Ultimate Series which are retailed through over 80 retailers in 30 markets around the world.

McLaren is a pioneer that continuously pushes the boundaries. In 1981, it introduced lightweight and strong carbon fibre chassis into Formula 1 with the McLaren MP4/1. Then in 1993 it designed and built the McLaren F1 road car - the company has not built a car without a carbon fibre chassis since. As part of the Ultimate Series, McLaren was the first to deliver a hybrid hypercar, the McLaren P1™.

Announced at Goodwood Festival of Speed in 2018, the company’s Track25 business plan will see it invest £1.2billion in research and development to deliver 18 new cars or derivatives by the end of 2025.

To support the development, engineering and manufacture of its range of innovative sportscars and supercars, McLaren Automotive partners with world leading companies to provide specialist expertise and technology. These include AkzoNobel, Kenwood, Pirelli and Richard Mille.

The McLaren Group is a global leader in luxury automotive and technology and comprises three businesses: Automotive, Racing and Applied Technologies.