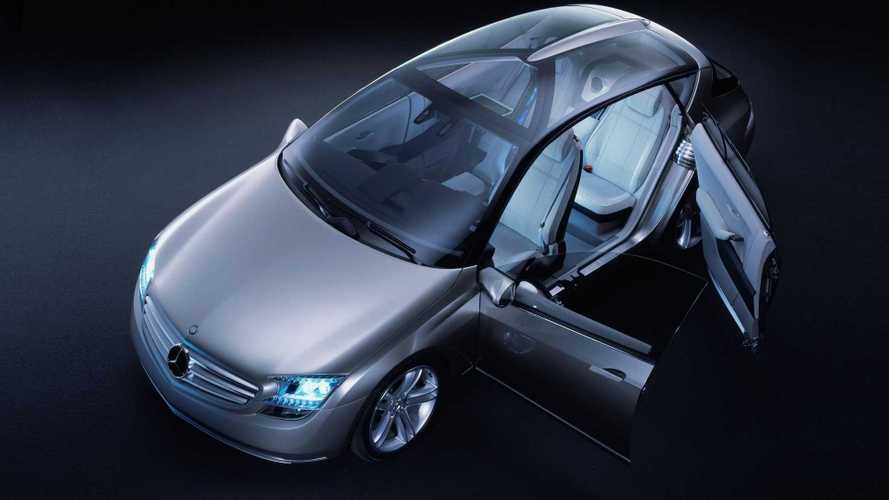 The oddly shaped concept was a technological tour de force with electronic accelerator and brake pedals.

Aside from its unusual shape, the F 500 Mind crammed a lot of tech inside a futuristic cabin featuring a massive glass sunroof and innovative pedals for acceleration and braking. It genuinely deserves its 15 minutes of fame in our Concept We Forgot series.

Mercedes has a long history of F-badged research vehicles, and this F 500 is probably one of the quirkiest. While it’s not exactly the prettiest car to get the three-pointed star, we do love that nearly all-glass roof, which hopefully one day will be available on a production model. We’re also quite fond of the rear doors, which aside from opening the usual way, these can also be opened in the opposite direction like suicide doors.

How does that work? Opening the rear door the old-fashioned way is done independently of the front door and through a maximum angle of 90 degrees. For easier entrance into the cabin, there’s an extremely small B-pillar attached to the side skirts, which can be unlocked only after opening the front door beforehand. Together with the rear door, the tiny pillar swivels backward through up to 90 degrees, thus enabling a massive 1.9-meter (75-inch) opening without a conventional B-pillar getting in the way.

See other research vehicles from Mercedes:

While Mercedes is currently testing the waters with electrified diesel engines for the C-Class and E-Class, the F 500 Mind followed a similar philosophy some 15 years ago. There was a large 4.0-liter V8 powering the concept as well as charging the battery pack, while the electric motor worked independently or together with the internal combustion engine. The idea was to cut emissions and fuel consumption by relying on the electric motor in stop and go traffic when the ICE’s power was not necessary.

Also worth mentioning is the electronic accelerator and brake pedals featuring force-sensitive surfaces with built-in sensors. Electric pulses were sent to the powertrain based on the driver’s foot pressure on a pressure plate. While this may sound like a gimmick, the technology freed up a considerably amount of space inside the cabin, with Mercedes saying they were able to enlarge the front footwell by 12 centimeters (4.7 inches). In turn, this had a positive impact on rear legroom since the driver’s seat as well as the front passenger seat had extra room to slide forward.

Have you seen these already?

The F 500 Mind also previewed what was to become the night view assist system launched about two years later for the S-Class (W221). Mercedes equipped the concept with a windshield-mounted camera and laser headlights able to illuminate the road up to 150 meters (492 feet) ahead.

The all-digital driver’s display and infotainment screen might not seem much these days when even small mainstream cars have them, but it was an impressive feature back in 2003. Those buttons on the center console had sensors able to detect the driver’s approaching hand at a distance of several inches – a feature which nowadays most of us take for granted.

As you may recall, the most recent "F" research vehicle from Mercedes was the F 015 Luxury in Motion unveiled in 2015 at NAIAS in Detroit as a self-driving luxury sedan also with suicide doors.