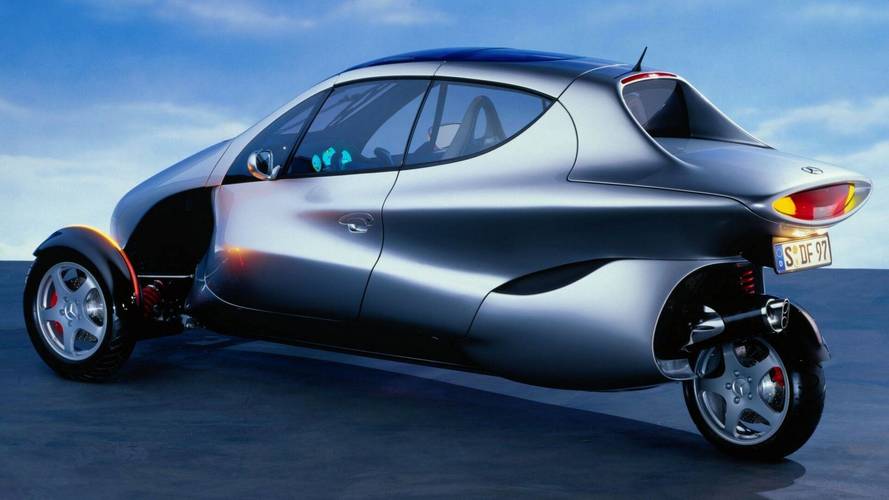 An A-Class-powered three-wheeler with RWD and a body that leaned into bends.

With the F300 Life Jet concept, Mercedes wanted to combine the best of both worlds: the comfort of a car with the agility of a motorcycle.

After covering the F100 and F200 in previous episodes of our Concept We Forgot series, this week’s episode takes us to the year 1997 when Mercedes introduced the third research vehicle of the F series. Significantly different than the ones before it, the F300 was developed to blur the line between a car and a motorcycle.

It took the naturally aspirated four-cylinder 1.6-liter engine of the A-Class, but rather than sending the 102 hp (75 kW) to the two front wheels, it channeled the power to the rear wheel. That’s right, the concept had only one rear wheel and received the engine’s output through a toothed belt and an electro-hydraulically controlled five-speed manual transmission with sequential gear change.

Without the three-pointed star badges, it would be virtually impossible to identify the F300 as a Mercedes. Well, maybe the instrument cluster’s dials inside the jetfighter-inspired cockpit might give away the car’s origins, but even so, the concept was (and still is) a bit of an oddball compared to past and current models from the company.

Check out the previous research vehicles:

The F300’s party trick was the Active Tilt Control (ACT), which was Mercedes’s way of saying the concept came with cornering tilt tech. The intricate electronic system was clever enough to figure out the optimal tilt angle based on the concept’s acceleration, speed, steering angle, and yaw behavior. How did it actually work?

The data gathered by the electronics was sent to a hydraulic cylinder mounted on the front axle, which pressed one of the two spring struts outwards, depending on the steering angle. By doing so, the body would effectively go into the tilt angle calculated by the onboard computers. If the concept of a leaning body sounds familiar, Nissan had a similar idea with its Land Glider concept back in 2009.

In collaboration with a tire manufacturer, Mercedes had to develop bespoke tires that would allow large camber and slip angles. These wrapped magnesium wheels that weighed 25 percent less than a regular aluminum motorcycle wheel. Speaking of weight, the chassis was made from aluminum and tipped the scales at only 89 kilograms (196 pounds).

The F300 will go down in history as being Mercedes’ first research vehicle that was developed from the ground up on a computer and then brought to life. It also featured an adaptive headlight with three reflector sections and two bulbs. Thanks to electronic wizardry, the headlight provided the best illumination possible, even in the bends as it was linked to the ACT system. Corroborated with a special cornering light, the low-beam range was improved by more than 80 percent. There was also a light sensor to automatically trigger the headlights at dusk or whenever entering a tunnel – a function which was implemented a year later in the S-Class W220.