Honda Civic Type R Facelift Spied – But What Is It Hiding? [UPDATE] 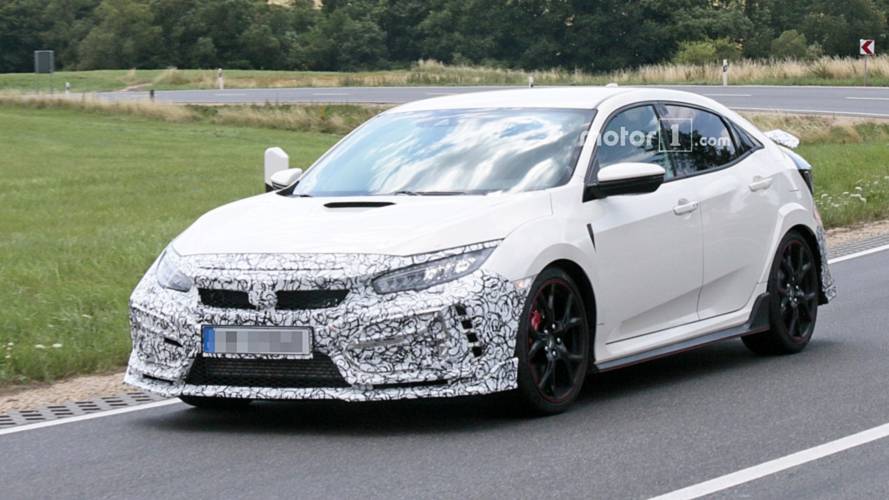 Our fingers are crossed for an even hotter version.

[UPDATE, July 18] Now the white prototype has been spotted with a smaller rear wing. 8 new spy shots have been added at the beginning of the gallery, below.

[UPDATE, July 17] 23 new spy shots have been added at the beginning of the gallery, below. Some of them are showing a red prototype that had a smaller rear wing.

The Honda Civic Type R has only been on the market for a year in the U.S., but already it appears to be getting a makeover. Honda engineers were caught testing the lightly camouflaged hot hatchback on public roads in Europe. Though our spy photographers suggest that it could be just a facelift, we're not so sure.

Spied on the Nurburgring:

For one, it's too early. The base Civic – which has been available since late 2015 – hasn't even received a makeover. We doubt the Type R would be quicker to the punch than its entry-level sibling. The other telling sign is that most of the body goes uncovered, only the front fascia and rear valance are under wraps. Yes, it does look a bit different compared to the current model, but we think it could be an even hotter version. Here's why.

Back in October, we reported that a cheaper Type R was coming. That means Honda could offer the hot hatchback in more than one flavor. When compared to the Focus RS, the Civic is down 44 horses on the Ford and comes in a front-wheel-drive configuration exclusively. Don't bet your life savings on a more-powerful, all-wheel-drive iteration, but it's fun to dream.

Whatever the case, we only have a handful of images to work with. From them, we see that the front fascia only gets a minor visual update, including flap-like front air intakes and lightly revised headlights. We'll have to wait for more details from Honda when the time comes.

For now, the Honda Civic Type R maintains its current look and power output. The same 2.0-liter turbocharged engine producing 306 horsepower (228 kilowatts) and 295 pound-feet (399 Newton-meters) of torque is found underhood, paired to a six-speed manual transmission. The 2018 model now starts at $35,595, including the $895 destination charge.

Honda Civic Type R is the king of records: