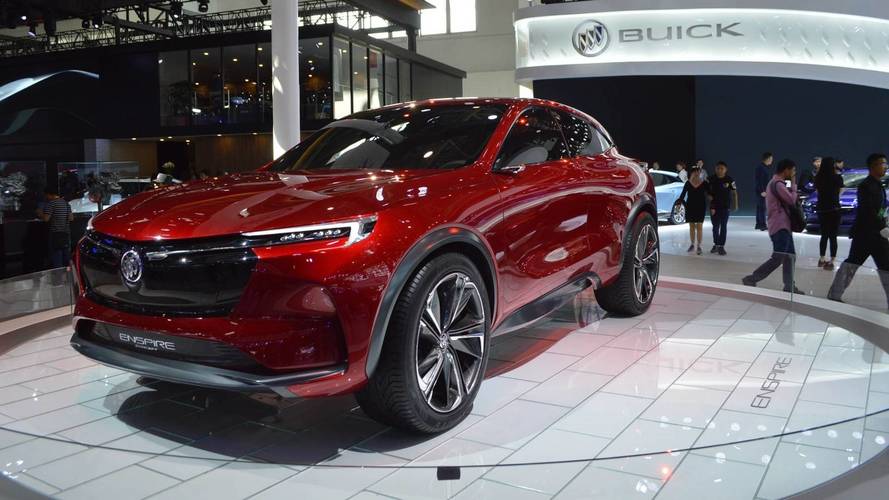 The electric powertrain would give the concept a 370-mile range.

[UPDATE, April 25] Live images from the Beijing Motor Show have been added at the beginning of the gallery, below.

After a single teaser, Buick has unveiled its attractive Enspire concept in China ahead of going on display in Beijing on April 25. In addition to looking good, the model features an electric powertrain that produces 550 horsepower (410 kilowatts) and allows for a 370-mile (596-kilometer) range.  Buick estimates the SUV would hit 60 miles per hour (100 kilometers per hour) in four seconds.

The brand uses the concept to show off a fantastic take on its existing design language. In front, the Enspire feature a broad grille and skinny, chrome spears incorporate the LED headlights. Big intakes dominate each corner of the vehicle's face. The side and rear feature smooth contours, and there's a trendy floating roof. To match the front, a strip of LED taillights stretch all the way across the rear.

Buick calls the interior theme "surround skyline," but the company's single photo doesn't provide a very good look at the cabin. It's clearly quite a high tech place, though. The company imagines tech that would turn the entire windshield into a head-up display. This would mean never needing to look away from the road for seeing navigation instructions because augmented reality simply highlights the street ahead to show the driver the correct way to go. If that somehow isn't helpful enough, there's a redundant navigation display in the instrument panel. In a luxurious touch, the center console and armrests feature a mix of wood and suede.

There aren't many further details about the Enspire's electric powertrain. In addition to its high power and long range, the system reportedly supports fast charging for recouping 80 percent of the battery's capacity in 40 minutes.

WUZHEN, China — The Buick Enspire all-electric concept SUV, an exploration of Buick’s bold design ideas and innovative technologies for future mobility, made its global debut in China. Key features include:

Buick’s eMotion electric propulsion technology generates a maximum power of 410 kW, enabling the concept to sprint from 0-60 mph in 4 seconds.
The Enspire is able to travel up to 370 miles on a single charge.
Supports both fast and wireless charging — the battery can be charged to 80 percent of capacity within 40 minutes.
The Enspire all-electric concept SUV will be on display at Auto China 2018 in Beijing from April 25 to May 4.