"F1" License Plate For Sale At An Unbelievable $20 Million 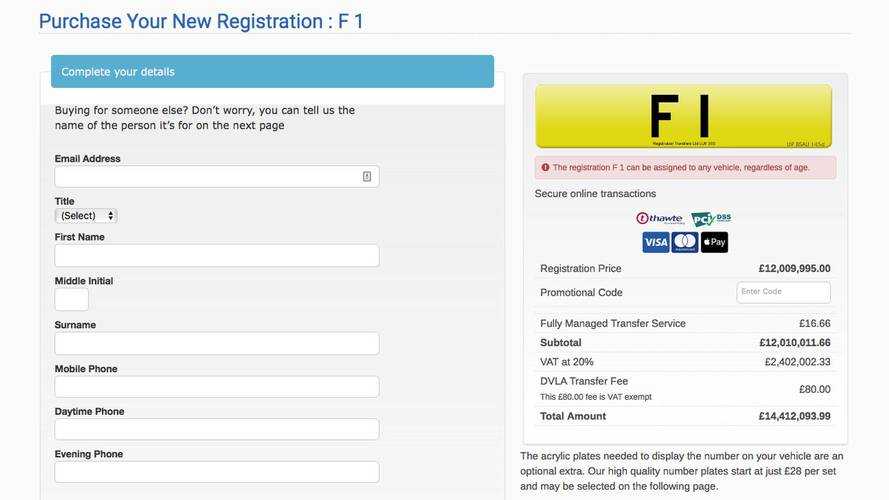 How much would you pay for a vanity license plate?

If you said you’re willing to pay $20.3 million (£14,412,093.99) for a vanity license plate, might I offer you an investment idea called my bank account? That’s the price tag for the coveted “F1” license plate that’s for sale on RegTransfers.com. That’s quite the penny for a license plate, especially for one as recognizable as it is. You indeed couldn’t rob a bank or elude police. However, if you have the cash for the license plate, you don’t really need to rob said back nor run from the cops. You could rent a private track for your high-speed antics. You could even rent some time pretending to rob a bank, too.

The famous plate has been owned by automotive company Kahn Design founder Afzal Kahn for years. He bought the plate back in 2007 for a cool $900,000 (£440,000) at the time. He’s had offers in the past for people to buy the plate, but he’s turned those down, believing the plate is worth more than what interested parties were offering.

Back in 2014, the plate popped up the same site with an asking price of £10 million. However, representatives for Kahn denied that he was selling the plate and that he never permitted RegTransfers.com to sell the plate in the first place.

If it’s a legit posting for the plate, there are likely plenty of eager buyers out there wanting the iconic “F1” license plate for their fleet of supercars.

So, while it’s unclear if this posting is legitimate, it’s still fascinating to wonder who would, or could, drop $20 million for a license plate. If you’re thinking of adding it to your Ford Escort wagon with rust on the bumper, may we suggest investing in something other than an “F1” license plate? You could buy several supercars, donate money to charity, or buy your own Formula One car. The list is endless.