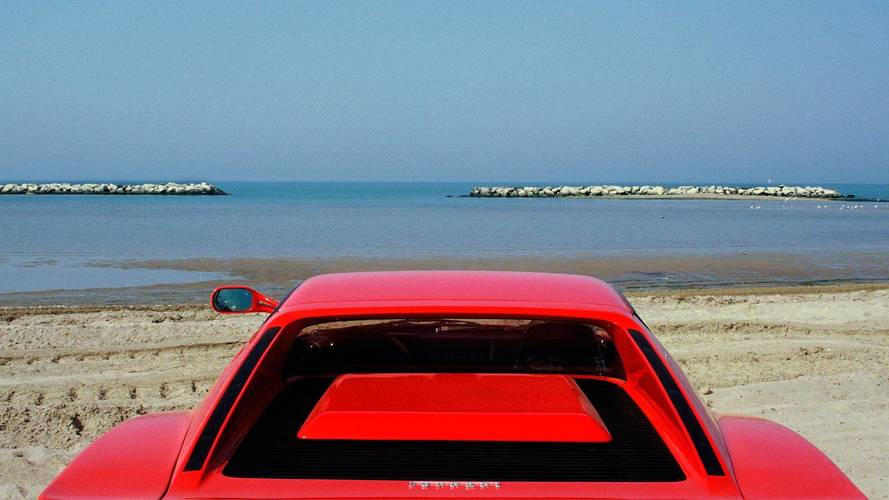 The Italian Stallion-loving community over at FerrariChat helps us answer this question.

Few cars in automotive history are as Iconic as the Ferrari Testarossa. Between video games like OutRun, TV shows like Miami Vice, and celebrity owners like Michael Jordan and Elton John, the Testarossa is what many people imagine when they think of Ferrari. The ‘80s were a lavish time, and Ferrari wasn’t the only Italian brand making mid-engine, 12-cylinder cars. The Lamborghini Countach was just as popular in South Florida and Hollywood, which made for great competition between neon-clad executives. This was an era of praising the future but focusing on the moment, and no one would have guessed that it was the end of the line for the Maranello flat-12. While Lamborghini went on to solidify its design language and brand image with cars like the Diablo and Murcielago, Ferrari ceased making mid-engine, 12-cylinder supercars. It was King of the booming segment, and then walked away. The question is, why?

First off, let’s clarify the type of car we are discussing.

Yes, Ferrari put a V12 in the F50, Enzo, and La Ferrari. However, these cars are “halo” cars, limited in production and costing in the millions. The successor to the Testarossa was not the F50, but rather the 550 Maranello, a front-engined, V12 Grand Tourer that focused more on luxury than performance. One way to explain this drastic change in the Ferrari line up is simply the cost of development.

"... the costs for R&D go up as do manufacturing costs... with new parts and assembly methods. Ferrari has a limited number of cars they build a year and to keep it as profitable as possible they need to keep the number of models offered to a minimum." - FerraiChat user BMW.SauberF1Team

There were simply too many overlapping classes, and the Testarossa stuck out like a beautiful, red sore thumb. More than this, Ferrari was struggling after the passing of Enzo Ferrari.

"When [Ferrari President] Montezemolo took over, Ferrari was not in a great state. 348 had poor reviews, Mondial also... the 412 was dying, Testa was going down the road of the exciting but crazy and uncommercial Lambos." - FerraiChat user Themaven

Ferrari needed to make some changes, and here’s what they came up with by 1996…

Deciding to end the Mondial was easy, and replacing the 412 was overdue, but the introduction of the F50 had major implications. The mid-engine V12 F50 reduced the number of V8s in the line up to just one. This ultimately made the flat-12 Testarossa superfluous, so instead of developing another 12-cylinder mid-engine supercar, Ferrari balanced the line up with a proper Ferrari GT.

"... it's logical, the way the lineup is today. A mid V12 below the halo cars makes no sense to me" - FerraiChat user G. Pepper

But how does removing redundancy and lowering the cost of development explain cars like the Ferrari FF and impending SUV? Many argue that such cars are unnecessary and go against the brand’s identity. If cost were truly the reason for this major shift in Ferrari, why would Ferrari invest in such unpopular cars instead of a new Testarossa? The answer is simple, those cars attract a different buyer.

The V12 GT market is much different than the mid-engine V12 market. Front-engine cars are more practical (or so they say), and they are less ostentatious. Remember, the successor to the Testarossa was a restrained luxurious experience.

"[Montezemolo] wanted Ferrari to sell more cars for everyday use... and the mid 12 cyl is never going to be as practical as a front-engined car with a traditional boot/trunk. Space for golf clubs, visibility, general usability, parking, and a host of other things." - FerraiChat user Themaven

Sure, the Testarossa was plastered on magazine covers and movie posters, but it simply did not sell as well as a GT. This line of thinking unfortunately explains the AWD, shooting-brake Ferraris we have today.

Furthermore, Ferrari knew it could sell a front-engine V12 GT because it was in their blood. It’s what Enzo founded the entire company on. When he passed away in 1988, Ferrari had not produced a true GT in almost 15 years. It took another 8 years for Ferrari to end the drought, but Enzo would have likely been proud of the 550 Maranello. The excessive and audacious Testarossa was just not in line with Ferrari’s identity. After all, Lambo’s 12-cylinder Miura was the first mid-engine “supercar”. Ferrari was simply returning home after beating Lamborghini at their own game. The Testarossa is an icon, but it is not a classic Ferrari GT.

Everyone can agree that having a mid-engine V12 Ferrari to rival the Diablo and Murcielago would have been awesome.

"... if [Ferrari] did have a 12-cylinder mid-engine throughout those years, I personally think they would have had more impact on the brand." - FerraiChat user Rossocorsa1

Considering the impact of the Testarossa, Rossocorsa1 makes a valid point. We will always encourage competition between Ferrari and Lamborghini, but we might not ever see an era like the Testarossa and Countach again. The current balance of Ferrari’s line-up is not only logical, it perfectly reflects their heritage.