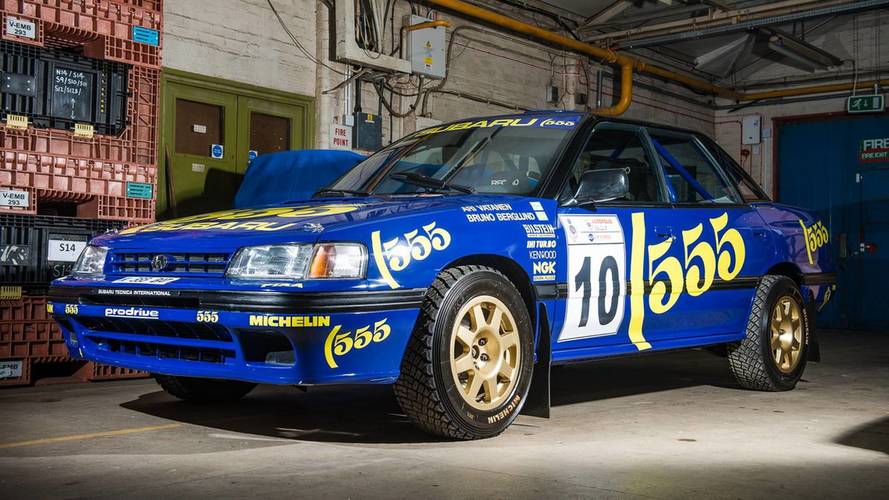 The Group A rally car led the 1993 Acropolis Rally in the hands of Ari Vatanen.

The 1993 Subaru Legacy RS Group A rally car driven by Ari Vatanen and Richard Burns is to be offered at the Silverstone Auctions Race Retro Competition Car Sale at Stoneleigh Park, Warwickshire, U.K. on Friday, February 23.

In its now-famous blue and yellow bodywork and registered "K 555 BAT," the Legacy led the 1993 Acropolis Rally for a while in the hands of Vatanen, ahead of Tommi Mäkinen, Carlos Sainz and Colin McRae.

Later, Richard Burns raced it to a second-place finish at the 1995 Bettega Memorial Rallysprint in Italy.

In 2008, the car was bought by the Richard Burns Collection, which commissioned Subaru rally specialists Autosportif Engineering to return it to its original specification. This was overseen by ex-Prodrive engineer Ian Richardson, whose knowledge and original technical drawings enabled a brand new, authentic Prodrive-spec Legacy shell to be made.

However, it retains many of its original mechanical components, its correct chassis ID plate and evocative number plate. It also features the correct "works" engine, six-speed gearbox, and suspension setup.

The Legacy preceded the Impreza in Subaru and Prodrive's joint assault on the World Rally Championship, with the first Prodrive cars making their WRC debut in 1990. The famous blue and gold livery was introduced in 1993 with cigarette brand 555's sponsorship, and went on to define a generation of WRC Imprezas.

"Vatanen and Burns are among rally motorsport’s pantheon of all-time greats, so we expect some intense bidding when it goes under the hammer."

Silverstone Auctions' Race Retro Competition Car sale and its Classic Car sale on the following day take place at the Race Retro show, at Stoneleigh on February 23-25. The auction house estimates it will fetch anywhere between £120,000 to £140,000, which works out to about $165,000 to $192,500 at current exchange rates.