You guys, it's finally here.

Be still, our hearts. The production-spec 2017 Honda Civic Type R is finally here, with a turbocharged engine, manual transmission, enormous rear wing, and three exhaust pipes straight out the center of its rear end. Honda is showing the road-ready Civic Type R at the Geneva Motor Show this week, before global sales kick off in a few months.

First thing's first: it looks awesome. None of the prototype's aggression was lost in the transition to production, and the hatch looks hot as hell, in all its flared-out, red-accented glory. LED lights are found at all four corners, as are lightweight, 20-inch wheels, wrapped in 245/30-series ContiSportContact tires.

Power comes from a turbocharged, 2.0-liter, four-cylinder engine, mated exclusively to a short-throw, six-speed manual transmission with active rev matching. Here in the U.S., the car is rated at 306 horsepower and 295 pound-feet of torque, though Honda points out that foreign-spec cars will actually carry a 315-hp rating (235 kilowatts, 320 PS) because of "a different, European testing protocol." 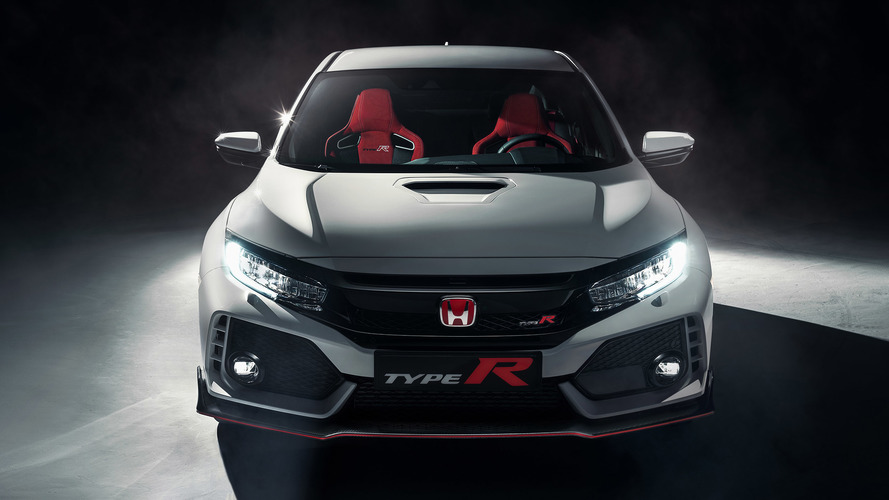 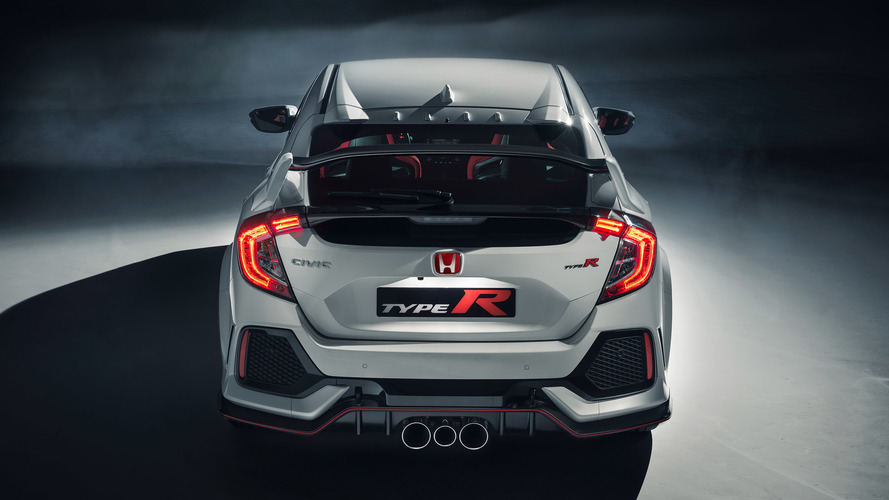 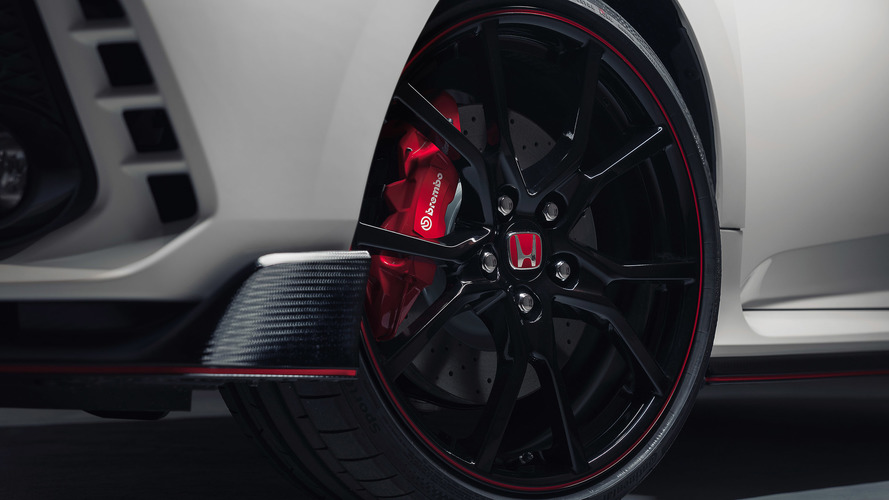 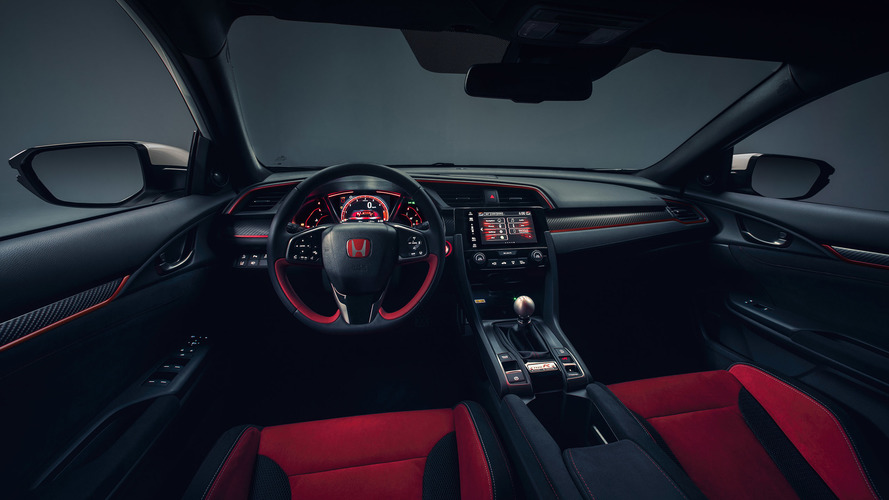 A limited-slip differential will keep the front-wheel-drive Type R in check on the road, as will the dual-axis front suspension and multilink rear setup with adaptive dampers. When it comes time to stop, Brembo front brakes with 13.8-inch rotors will handle the grunt of the power, aided by 12-inch rotors out back. Comfort, Sport, and +R driving modes adjust steering, damping, throttle response, and transmission rev matching, as well as the stability and traction control systems.

Honda says the Type R will only come one way, in fully loaded Touring spec. That means you’ll get a seven-inch touchscreen display standard, with navigation, premium audio, and – of course – Apple CarPlay and Android Auto.

Like all Civic Hatchbacks, the Type R will be assembled in Swindon, England, though its turbo engine comes from Honda of America over in Anna, Ohio. Pricing will be available closer to launch, though we expect it to start somewhere in the mid-$30,000 range, just like its chief rival, the Ford Focus RS. (We can't wait to get those two side by side, by the way.)

We'll have more Civic Type R news straight from Geneva, so watch this space for more. If you need us in the meantime, we'll be drooling over at the Honda stand...

GENEVA, March 6, 2017 – Honda today took the wraps off one of the most anticipated models in its history with the unveiling of the production 2017 Civic Type R at the Geneva Motor Show. The long-awaited Civic Type R, slated to go on sale in the U.S. in late spring with an MSRP in the mid-$30k range, is the first ever Type R-badged Honda to be sold on American soil. The Type R will feature a high performance 2.0-liter turbocharged powertrain, substantially upgraded body and chassis, and other track-ready, Nürburgring-tuned and tested performance components. The 2017 Civic Type R will make its U.S. debut at the New York International Auto Show on April 12, 2017.

“The fastest, most powerful Honda ever sold in America, the Type R caps off the incredible success story of our 10th generation Civic lineup,” said Jeff Conrad, senior vice president & general manager of the Honda Division, American Honda Motor Co., Inc. “We’re happy to inform our U.S. enthusiasts that the long wait for the forbidden fruit of Honda Type R performance is nearly over!”

The new Civic Type R, sharing the body style of the 5-door hatchback variant of the tenth-generation global Honda Civic platform, will be powered by a U.S.-built 2.0-liter DOHC, direct-injected and turbocharged i-VTEC in-line 4-cylinder engine with peak ratings of 306 horsepower at 6,500 rpm and 295 lb.-ft. of torque from 2,500 to 4,500 rpm. The engine will be mated exclusively to a short-throw 6-speed manual transmission with rev matching capability – employing automatic throttle blips for smoother shifts and power delivery. A new single-mass flywheel reduces clutch inertia by 25 percent versus the previous (European) Type R and a lower final gear ratio is employed to improve acceleration response.

The Type R’s scalpel-sharp responses are further enhanced by a body more rigid than the substantially improved Civic Hatchback on which it’s based – with a 38 percent increase in torsional rigidity and 45 percent gain in bending rigidity versus the previous Civic Type R – enhancing steering response and cornering stability while mitigating body vibration and cabin noise. The improvements are made possible by the application of structural adhesive throughout the body. Ultra-high strength steel is used for 14 percent of the body structure, and the Type R has an aluminum hood, contributing to a 16 kg (35 lb) reduction in body weight versus the previous Type R, and a 7 kg (15 lb) reduction versus the base 2017 Civic Hatchback.

The 2017 Civic Type R will launch this spring in a single, premium-contented Touring trim. A 7-inch Display Audio touchscreen interface with embedded Honda Navigation system has both Apple CarPlayTM and Android AutoTM compatibility; and should the driver ever tire of hearing the Type R growl, a 540-watt, 12-speaker audio system with SiriusXM 2.0, HD Radio and Pandora compatibility is also provided as standard.