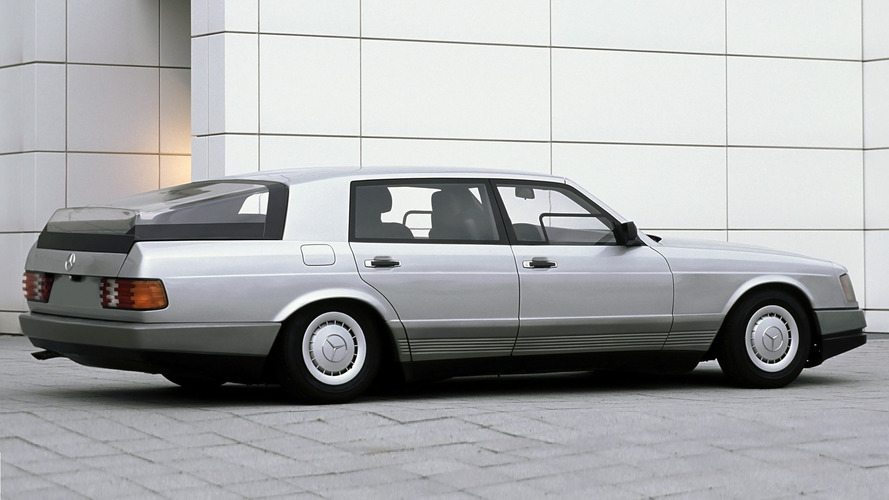 It's the CLS from 36 years ago fitted with a gas turbine engine.

There are lots of reasons why the Mercedes Auto 2000 concept is worthy of your precious time — from its three innovative powertrains to its low-slung body.

Introduced several months after the tiny NAFA concept, the Auto 2000 was described back in the day as being a “Mercedes-Benz for the new millennium.” It was developed with efficiency in mind in the aftermath of the 1970s oil crisis. The revolutionary concept was part of the “Auto 2000” project launched by the Federal German Ministry for Research and Technology towards the end of that decade.

The main idea was to come up with a thrifty car that had a fuel consumption of up to 11 liters / 100 kilometers (21.3 miles per gallon) and a maximum weight of 2,150 kilograms (4,739 pounds). Needless to say, achieving those ambitious fuel economy targets was very hard back then, especially for such a behemoth.

Other requirements cars had to meet included a payload capacity in excess of 400 kg (882 lbs) and enough room inside the cabin to accommodate four people.

Mercedes’ solution was an absolutely huge Kammback — the name of the body style originates from the research conducted by German car aerodynamicist Wunibald Kamm in the 1930s. Not only did its design preview what was to come in the following years, but the low-slung body was also aerodynamically optimized as the concept had a drag coefficient of just 0.28.

To meet the fuel economy goal, the Auto 2000 concept needed more than just a sleek body. That’s why Mercedes’ engineers came up with three frugal powertrain solutions. The first one was a V8 3.8-liter gasoline engine fitted with cylinder deactivation technology, which as you can imagine was quite the novelty back then. Whenever the engine’s full power was not necessary, half of the cylinders were temporarily shut down to save precious fuel.

The next proposal for an economical engine was a six-cylinder 3.3-liter diesel that had two turbochargers. It granted the Auto 2000 with an “exemplary accelerating power” and needed only 7.5 liters / 100 km (31.3 mpg) while the car was doing 75 mph (120 kph) based on Mercedes’ testing procedures.

The third and final solution was also the most revolutionary of them all: a gas turbine engine. It did not necessitate water cooling and had a compact size and a low weight while generating “favorable torque characteristics.”

All three engines were hooked up to a four-speed automatic transmission.

The Auto 2000 served multiple purposes as Mercedes also used it to test integral front seats with all the belt mounts on the seat itself. Moreover, the interesting vehicle was equipped with integral child restraint systems in the rear seats and was also fitted with pedestrian-friendly bumpers.

In many ways, the concept was way ahead of its time. Even though it never made it to the assembly line, some of the knowledge gained during development was put to good use on production models years later.