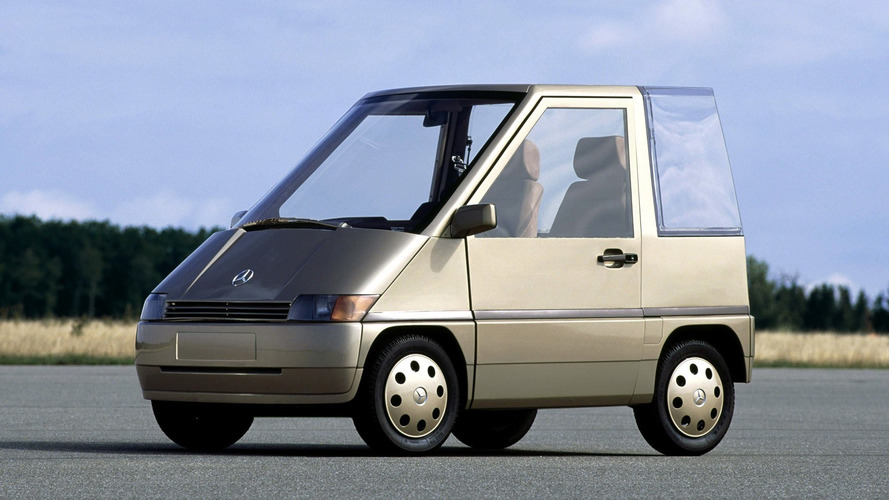 Long before the A-Class and Smart, Mercedes-Benz came out with a pint-sized city car.

Well, it’s certainly not because of how it looks. All jokes aside, the Nahverkehrsfahrzeug (NAFA) which translated means “short-distance vehicle,” signaled Mercedes-Benz’ intensions towards the introduction of a city car. While the NAFA did not live to see the light of production day mainly because it wouldn’t have met the company’s safety standards, the idea behind the car was adapted more than 15 years later in the first-generation A-Class and the original Smart ForTwo.

In other words, the NAFA pretty much laid the groundwork for those two cars and Mercedes even said the concept “did not fall into oblivion” as the “insights it furnished” were implemented in the prototype of the first A-Class. That being said, the latter was significantly longer than the 2.5-meter NAFA and you can notice the size difference between the two in the image below which also shows the 1993 Vision A 93 concept in the middle. As a matter of fact, the NAFA was actually even shorter than the 2.69-meter ForTwo.

It was also shorter than other miniature cars such as the Toyota iQ and its posh yet ridiculous equivalent, the Aston Martin Cygnet. Speaking of those two, both had a turning cycle of 7.8 meters (almost 26 feet) whereas the NAFA performed the maneuver in only 5.7 meters (less than 19 feet). The very compact size combined with a small turning radius and power steering made it ideal to maneuver around crowded cities and also a joy to park thanks to four-wheel steering.

Motivation was provided by a small three-cylinder, 1.0-liter engine with 40 hp (30 kW) delivered to the front axle through an automatic gearbox. That doesn’t sound like a lot of power, but the car must have been very light given how tiny it was.

Much like the Peugeot 1007, Mercedes fitted the two-seater microcar with sliding doors, thus allowing the driver to squeeze in the 1.5-meter-wide vehicle in a very tight spot. It also had automatically-folding mirrors which for a 1981 concept was not too shabby. Once inside the concept, NAFA provided the “seating comfort of an S-Class,” according to Mercedes, but they were probably joking around when the PR guy wrote that.

Here's a quick reminder of our three most recent concepts from the series: Dodge Sling Shot, Ford Ghia Focus, and Alfa Romeo Bella.